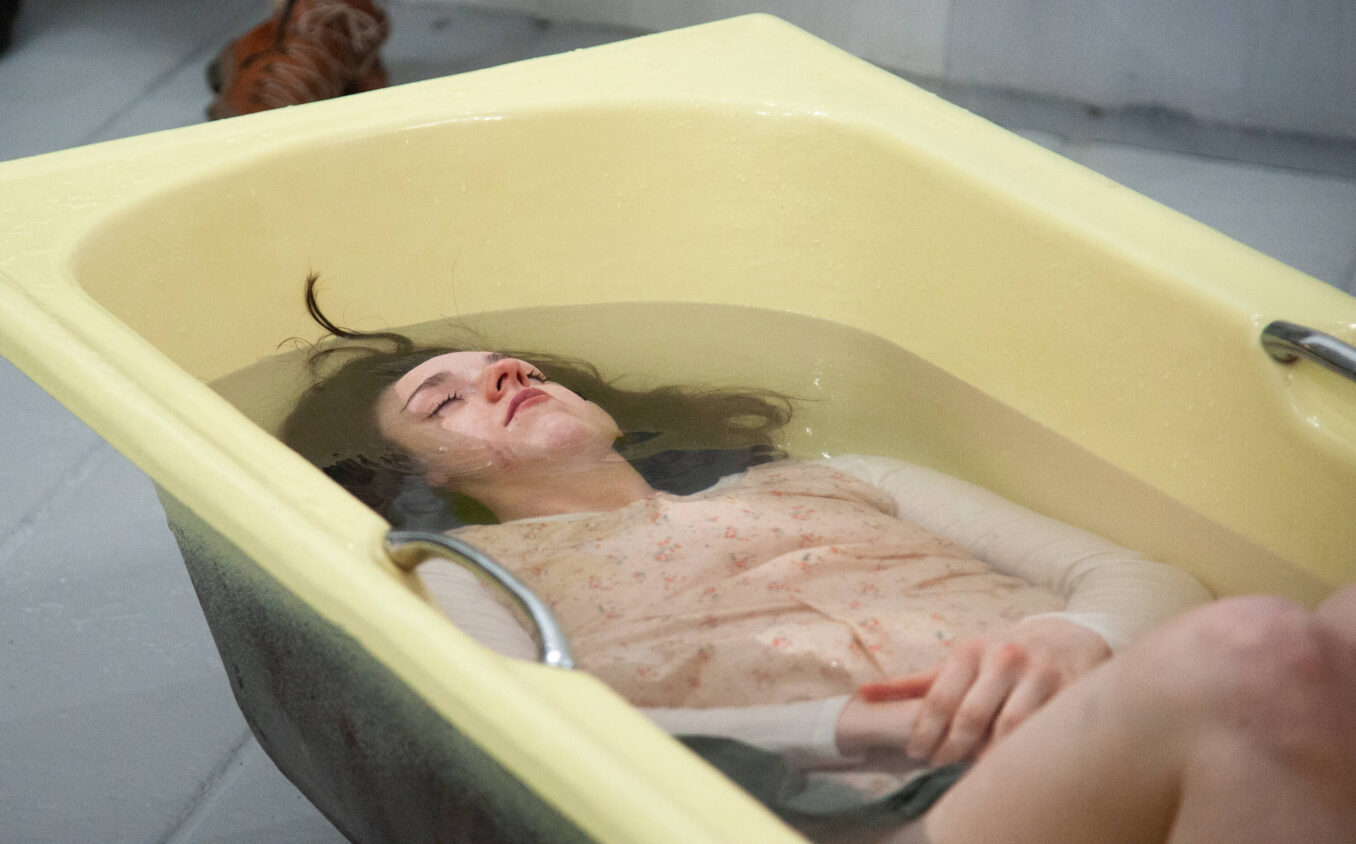 On that day in January when winter finally decided to bite, the 12-foot red doors of the Fire Station Gallery gaped open. In its jaws, a yellow bathtub, half full of cloudy murk, sits almost fallow but for a motionless floral dress, stained with an indistinct darkness. This is the sculptural residue of Diviney’s performance, I,X,. A monitor shows Diviney entering an indistinct white space, wearing the aforementioned garb, and slowly immersing herself into the bath. Her knotted pink fingers pensively clutch a bar of soap, her lightly freckled face is stoic, and at the pace of a prayer, she scrubs the blackness permeating the lower half of her dress. A vulnerable intimacy laps gently with the bathwater that surrounds her before she rises up, twisting her dress into a weighty pouch. The water bellows, then drains from her with the intensity of impending labour – she is pregnant with defiance, the painful contractions of history palpable, as she repeats the motion. In this looping action, she is at once both embryonic and the birthing mother. As the object, her body, is powerful, she is autonomous; yet the shadowy stain remains, insolent in its clarity.

McKeagney’s sculptural series embodies notions of new materialism, conversing with geology and the primal impetus of finding a single ergonomically shaped rock on Killiney beach. A satisfying photographic triptych of hands clutching the kidney-shaped stone anchors her central sculpture. From an open birch ply box, three steel rods blossom white polymorph cradles. The central sprout elevates the naked ‘origin’ rock above the two ceramic homages to its left and right – one glossy black, the other a muted metallic gold. A further three ceramic iterations sees the artist interrogate the original granite form in speckled spritely yellow, turquoise and gentle pink glazes, each caressed to the wall in the foamy white polymorph like poisonous mushrooms to a tree. In rusts, mossy greens and sepia tones, McKeagney’s ‘Continues’ series comprises of square glass frames displaying pigments derived from coloured pebbles, also sourced from Killiney shores. Each offering resembles a map-like formation, playing with the elemental origins of her materials. The entire series has a warm tactility that only an artist who has developed a keen intimacy with her materials could achieve. It elevates the natural object, with each support mechanism feeling like an extension of the artist’s hand, asking us to reconsider all objects in the world around us.

A small boy with a lone white balloon on a string stands watching as it dances in the breeze. The shadow of a young girl spills into the frame. Cut to darkness, as a terrifying clown appears from the shadows, asking us to play a game which serves as mode of narration for Heavey’s disturbing video assemblage, I’m Sorry I was Not Here (2018). Drenched in the sickly secondhand Americana of 1980s McDonalds and Coca Cola commercials, the soundscape contorts from advertising jingles (like “Can’t beat the real thing”) to the Angelus bells. A warped Catholic sex education video from the same era, shows a pious woman discussing slippery vaginas and using her fingers to illustrate sexual intercourse. Cut to a snowy woodland scene, then a philosophical sky. Heavney dexterously sutures religious and capitalist psychosexual preoccupations, creating a cacophonous savage that feverously claws at its own historic repression, spilling fresh and bloody truths.

‘Lectus’ is an ambidextrous provocation, bearing both the hands of the artists it frames, and the hands of the state. Whether clutching a rock, a bar of soap or simulating sexual intercourse, these hands bear witness to a palpable residue, symptomatic of twentieth-century Ireland. Collectively these works ignite complex anthropocentric tensions, exorcising historic grievances as a form of cultural reflection, whilst elevating geological matter itself as a transcendental agent of change.

Brendan Fox is a writer, curator and visual artist based in Dublin and Rome.