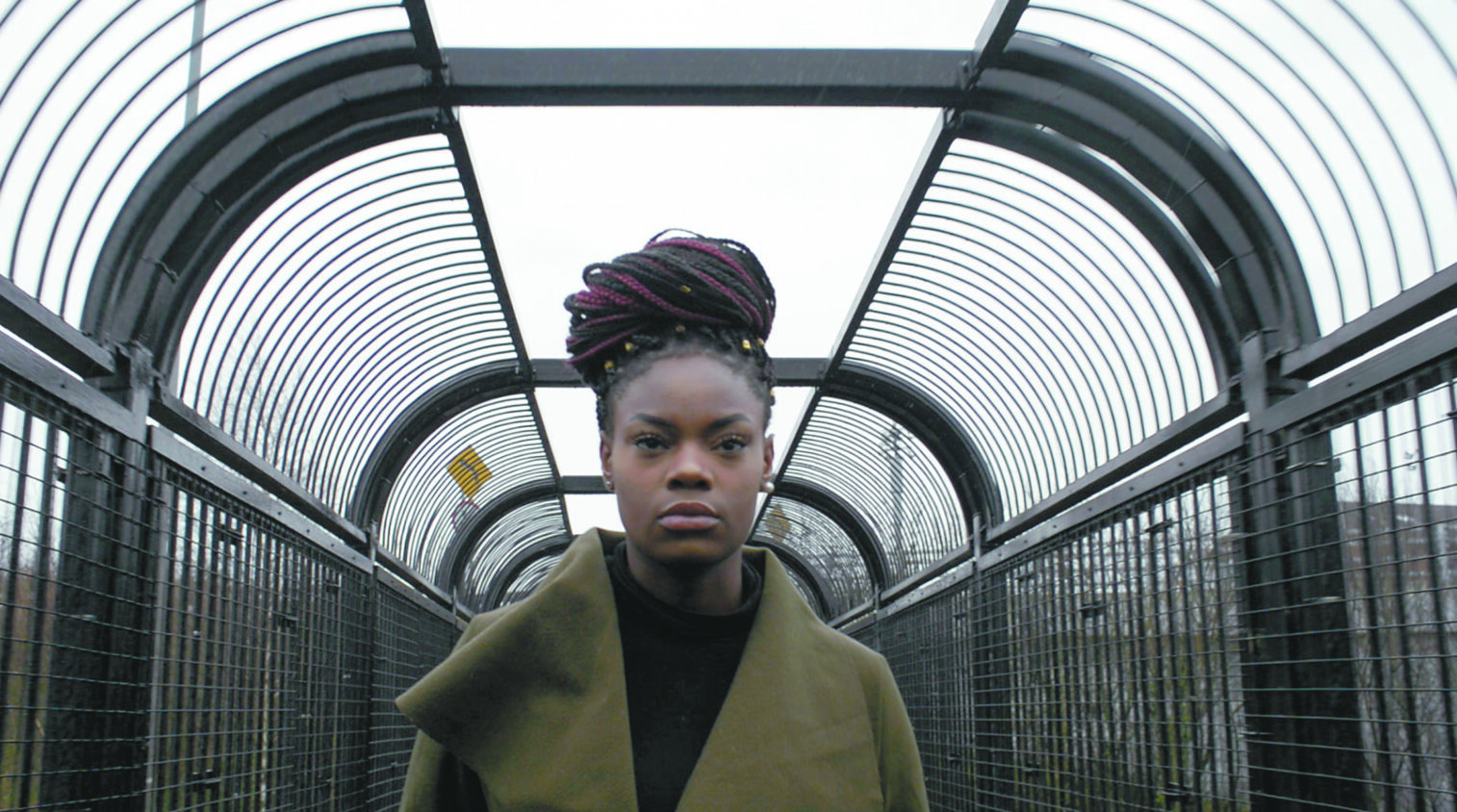 Two neon signs in a field

‘It Only Remains’ (into the night)

(out of the dawn) ‘Until Such Time’

Explicit or evocative, for discourse or meditation

A spell to conjure a desired state of affairs

A declaration that a state of affairs pertains

Sounds: between crying and sighing

The view from the house,

The after image and the image after,

Image of place as text in place

We were in two minds

The Irish and the English

In and out of place

An authentic nuclear past,

To stir, to rouse,

Five pounds for keeping to the Gaelic,

For a child in school in the 50s

Joanne Laws: Was ‘PROCLAMATION’ conceived from the outset as a touring exhibition?

Andrew Duggan: From the beginning the project was intended to be presented in various international cultural spaces that would offer platforms for deeper explorations of both the artworks and the historical and cultural contexts. In spaces like the Irish Arts Center in New York, the Centre Culturel Irlandais in Paris and The EU Committee of the Regions in Brussels, understandings of Irish culture were a given.

I felt it was important to include artists from various disciplines, such as visual art, dance and performance, who would be unified through lens-based and moving-image sensibilities. As well as myself, the artists who exhibited as part of ‘PROCLAMATION’ were: Jazmin Chiodi and Alexandre Iseli, Olwen Fouéré and Kevin Abosch, Anthony Haughey, Frances Hegarty, Andrew Stones, Nigel Rolfe, John Scott and Jason Akira Somma. I thought that bringing together these important artists would create an interesting syntax of visual and verbal dialogues, offering an alternative to the anticipated 1916 commemorations in Ireland. JL: What was your approach in leading the project? How does an artist-curator (as opposed to a curator, director or producer) influence a project in different ways?

AD: Rather than giving a brief, I invited the artists to contribute to a project where the centennial imperative would reframe ideas of place, language, equality and identity inherent both in the artists’ work and in the 1916 Proclamation. I trusted their integrity as well as their potential involvement and varied responses. I have encountered a certain amount of fear of artist-led projects among established curators in recognised institutions, particularly large traditional institutions. They fear that an artist-led project is a wild cat, a thing with an unforeseeable trajectory. For me, this unpredictability is a strength. I came of age in the nineties and early noughties, and saw the rise of the single (predominately white male) curator. In many ways, artist-led projects are the antithesis of such distantly-directed exhibitions.

I have received positive comments from the partners and venues, who feel that the insights offered by artist-curators (into the technicalities and philosophies of exhibition-making and the process of working with artists) are crucial to the transmission of the artworks. As an artist-curator, I had an almost symbiotic empathy with the artists and confidence in everyone involved. I may have brought the artists and institutions together, but artists like Jazmin Chiodi, Alex Iseli and Anthony Haughey ran with the project in their own ways, branching out and organising further artist-led events to extend the exhibition experience.

JL: In your view, how is the 1916 Proclamation relevant for modern Ireland?

AD: I cannot help but compare the 1916 Proclamation with the process of viewing art and understanding artist-led practice. The Proclamation was created within a particular time and context – ahead of its time in many ways – and it exists now, still resonating and influencing us. The 1916 Proclamation’s fervour, vision and imperfections are all manifest or perhaps hidden within the object itself. Like an artist-led project, the desire for unfettered control is clear. I was greatly taken by the opinion of Gerry Kearns, Professor of Geography at Maynooth University, who stated that “in fewer than 600 words, the Proclamation promises what independence will be for, laying a heavy obligation on future generations to be worthy of the sacrifice made in its name”. [1] For me, the 1916 Proclamation points us in the direction of what is possible and what remains unfulfilled. It is an object and a living document that should be taken from the political bodies that wish to control it and redistributed to public. As described by Olwen Fouéré, the Proclamation of 1916 “carried a great promise which many Irish people would regard as unfulfilled”. She believes that in the hundred years since it was written, “the time is way overdue for us to unearth the hidden histories, to listen to the code carriers, to embody the shadow and to discover what it is we still really need to fight for”.

JL: Perhaps you could describe some of the responses to the 1916 Proclamation that emerged in the work?

AD: All the artists share a great intensity and conviction. This is evident in the depth of the works they created and perhaps indicates a tide-change in Irish arts, where emotion, creativity and intellect can be interwoven.

Anthony Haughey described the importance of language to his work Manifesto, stating: “There are references to the 1916 Proclamation as well as historical and contemporary literature, evoked through cinematic camera movements and the exploration of liminal landscapes.” In the film, “a young African-Irish woman walks towards the viewer dressed in a military green coat. She is similar in age to many of Ireland’s 1916 revolutionaries and epitomises Connolly’s phantasy of egalitarian citizenship in a Republic-to-come, but like her predecessors, she is marginalised and erased from history before it is written”.

In the closing sequence, “the camera pans a windswept mountainside. In the distance, a small concrete square is cut into the bog. The camera moves slowly towards this object. The narrator describes a ‘300 mile open wound, running down the length of my spine’ (a reference to Chicana poet Gloria Anzaldúa). The camera finally reveals a concrete helicopter landing pad, a former British army outpost on Ireland’s border. The sequence fades to black”. To close, the narrator references Brian Friel’s Translations: “To remember everything is a form of madness.”

Jazmin Chiodi and Alexandre Iseli’s film, A thing is a thing is a thing is something else… addresses embodiment and “examines the tension between proclamations of intention and physical realisation”. Opposed by “flesh, memory, culture and structures, both individual and social”, true realisations of idealised change are frequently resisted on many levels.

John Scott and Jason Akira Somma described being inspired to “rediscover the Proclamation in the context of the world today, particularly in view of the decrease in civil liberties that is creeping into Irish life and society as a whole”. They continued: “Thinking about the aspirations of the Proclamation in the context of the current climate of xenophobia and racism against refugees made us realise more than ever the importance and beauty of our text. In our work, poetic words come out of the mouths of drowning refugees – non-Irish born people, submerged in water and trying to speak in gasps. The water is a place of transition – of birth or death – that is neither land nor country. The 1916 Proclamation text inspired the performers in our film, who were very moved by how relevant it is today. They did not have any deep knowledge of the Irish War of Independence or the Easter Rising. This message has been lost in continuing to reconcile Irish unity and the Troubles”.

JL: Can you give details about the work you developed for the project, situating it in relation to your ongoing research interests?

AD: Siobhán Dempsey, a camera person with a background in ethnography, and I developed the film Plus ça Change with a Russian immigrant named Ирина Быстрова (Irina Bystrov) in Ireland. Ирина shifts rubble from one pile to another and back again, not unlike the mythological figure Sisyphus, who was made to carry out a laborious, repetitive and futile action for all eternity. Plus ça Change pits two fundamental human conditions against each other: the resigned acknowledgment of the fundamental immutability of human nature and the enduring desire to effect change through praxis. Through the woman’s repetitive and recursive action, Plus ça Change metaphysically meditates on the paradox of change: the ‘void’ is built and un-built. It is not complacent viewing and the relationship between the work and the viewer is important. Action is halted by an off-camera voice, presumed to be a director, revealing that all forms of witnessing are constructed.

JL: Your commissioned works often interrogate or respond to artworks housed in civic collections. Can you describe your ongoing relationship with the historic?

AD: Artist Nigel Rolfe asks the question “Do we live in history or does history live within us?” I feel that I have an ongoing conversation, as I suspect many artists do, with previous artworks. It’s a conversation not unlike the one Pearse and Connolly may have had before drawing up the 1916 Proclamation, where the present and past were consolidated. In some ways artists continue discussions that began in the past but persist in the present. National institutions understand this continuum and are surprisingly open to such dialogue.

JL: How do you feel about the different iterations of ‘PROCLAMATION’ across different exhibition contexts and locations?

AD: Nigel Rolfe described the audience responses to ‘PROCLAMATION’ as “heartening, thoughtful and generous, with the artworks raising societal issues and inquiries into meaning”. Since it first opened in New York, the social, political and cultural landscapes have changed dramatically. The bombings in Brussels and Paris, and Britain’s exit from the European Union, have influenced perceptions and readings of the work. Anthony Haughey’s references to the “310-mile-long open wound – divided culture running down the length of my body” in Manifesto, seem even more poignant now, as does Rolfe’s commentary on the shifting definitions of ‘border’. In each of the cities in which we have exhibited, real concerns have been proclaimed. The project has created connections between art, artists, audiences and institutions, and seems to have prompted debate well beyond the discourse implied within the work itself.

‘PROCLAMATION’ is a multi-venue exhibition of new lens-based and moving-image works by leading figures in Irish visual art, dance and performance. It is supported by Culture Ireland’s International Programme for 2016, which celebrates the centenary of the 1916 Easter Rising.

Andrew Duggan is an Irish artist whose video works, installations and projects explore the complex relationships between self and place. Duggan makes work and leads projects which bring artist and institutions, art and ideas together in new dynamic ways. Previous projects have led to new lens based works by artists from various creative disciplines.