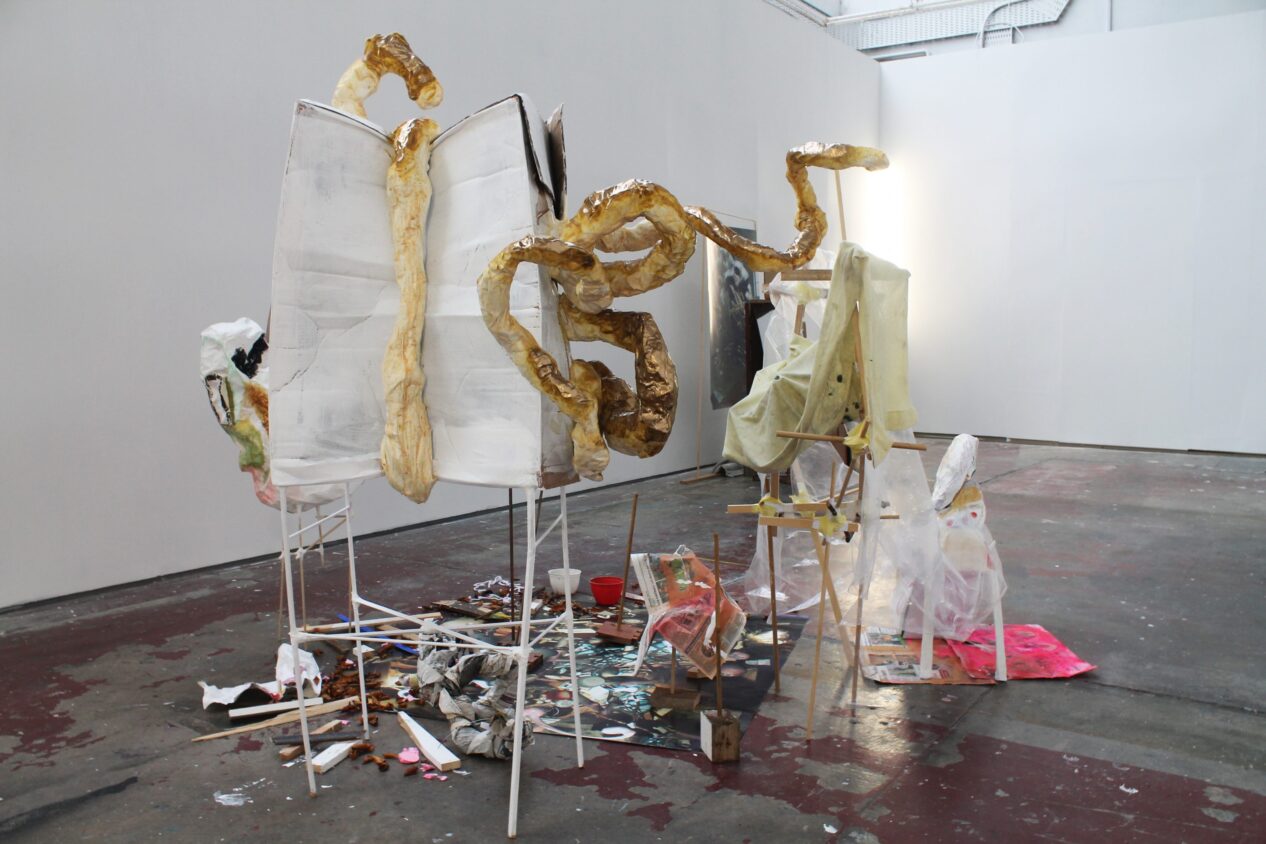 I became interested in identity politics in second year of my Visual Arts Practice degree at IADT Dún Laoghaire. Terms like ‘appropriation’ had begun to penetrate the pop culture sphere, which caused me to evaluate the work I was making in terms of my own cultural perspective. My practice has become an extension of the types of socio-political commentary that have become increasingly prevalent throughout the internet via social media and the public sphere. The internet is a particularly pertinent platform because it offers itself as a vehicle for research, while also providing its own kind of spatial interventions.

Historical art movements such as Arte Povera encapsulated ideologies regarding art and the everyday, defined by Italian art historian, Germano Celant, in terms of people against systems. The system he speaks of falls in line with many concerns regarding present and future assimilation and commodification of queer bodies. When Celant states (with regards to art production) that “each of his gestures has to be absolutely consistent with his behaviour in the past and has to foreshadow his future”, he highlights a tendency towards defining intangible ideas, people and gestures relative to historical contexts – a concern widely shared by queer theorists.1 Such concepts resonate with my own interest in making and are particularly relevant to postmodern notions of the everyday, whereby computers and digital spaces have become primary models of communicating and recording, generating vast archives of personal data – uploaded to clouds and easily accessible from anywhere that has an internet connection. For me, the repositioning of these historical narratives inside a queer framework has become interesting, based on a capacity to subvert and to create new narratives. Where queer theory practices see understandings of the term as relative to history, it is constantly being defined and redefined as that narrative progresses. The type of assemblage techniques that underpin my two-dimensional research and digital collages, echo the same process interests found within my sculptural assemblages. Compounding the two approaches has expanded my ideas about image deconstruction and reconstruction. Judy Chicago’s installation, The Dinner Party (1979), is a pointed reference for my work, based on how the piece wrote a new historical narrative by placing a certain value on kitsch over the aesthetic object. Documenting the process of making a physical sculpture and deconstructing it through collage techniques; reconstructing and printing this form as another physical object – this amounts to an aesthetic investigation of how we read images and objects. It also questions whether the documentation of process embodies the transience of queer culture more apparently than a finished artwork.

New sculptural works (including An Urban Phenomenon and Clobber Verses) developed for TULCA Festival of Visual Arts 2017: ‘They Call Us the Screamers’ allowed me to engage in the types of community politics that ran concurrent with the contextualisation of the exhibition. Across my practice, building sculptural installations has always been typified by methodologies that feel queer, through the use of found materials and ready-made objects. Incorporating large-scale prints into my sculptural installations for the first time allowed an engagement with pictorial space that felt authentic to my background in painting. The installations for TULCA’s Connacht Tribune Print Works venue were built from a range of materials including plastic, wood, plaster, papier-mâché and cardboard. These material associations allowed me to erect spaces that fostered associations with historical art movements (such as Minimalism and Pop Art), as well as capitalist mot

ifs that intersect with queer theory, engaging the viewer’s relational co-presence with objects in space.

Exhibition production has become an important extension of my studio practice. If artworks already exist, or are made for a specific purpose or setting, they are often repurposed or recycled afterwards. Exhibition-making exists as a platform for my ideas to be realised in a space outside of the studio. Whether a success or failure, this process allows making to be tangential and revaluated once art objects return to the studio. This treatment of materials is in direct conversation with the ‘precious culture’ surrounding artworks – and indeed the preciousness and perceived hierarchies of art materials themselves – and is only further compounded by my own interest in the ephemeral vernacular of queer culture. I am currently interested in expanding my use of digital collage – a process that, for me, denotes a fundamental compositional principle, but also the origins of symbols, motifs and visual representation. Moving the rhetoric into a digital sphere only furthers this conversation about how images are consumed, based on contemporary audiences’ participation in internet culture. When Hito Steyerl suggested that the ‘poor image’ mocks the promises of digital technology, it reminds us of our expectations regarding systems and the kinds of representation we readily and intimately consume.2 Digital art seems to be more expedient, because it addresses a viewer’s concerns more directly, but the medium interests me because it proposes many of the same concerns as sculpture. The dimensional concerns of the medium are investigated through my use of AutoCAD softwares, where virtual spatial interventions are possible and scale is implied through screens and projections (as opposed to physical objects), which requires a different set of demands from viewers in this regard. Building images using software like Photoshop, interests me because of the self-documenting processes that the software undertakes on its own. Using the preset software moulds and templates available is like having access to a digital ready-made, which comes with its own set of rules and limitations specific to the medium.

I am interested in notions of sculpture as architecture or public artwork, based on expectations of audience participation, as proposed by Swiss artist and architect, Max Bill. Bill questioned whether, at a time when “sculpture had become closely identified with the object, with something seen rather than experienced as a presence, a sculpture could still constitute a monument”.3 In this way, the work becomes more performative and has direct concerns with the body politic – habitually a very queer space. Arguably, successful queer art practices have become even more engaging when interpreted through the lens of socially-engaged critical frameworks, like Relational Aesthetics. Addressing the audience is a more practical concern that has emerged in a recent body of work, currently showing as a part of ‘Like Me’ with Eleanor McCaughey and in The Dock, Carrick-on-Shannon, until 31 March. This work is entirely framed by digital processes and plays with expectations regarding the origins of these processes. Images built inside a resolution usually encountered on a screen have been enlarged to the scale of a billboard. Similarly, images encountered amid fleeting online conditions are materialised in a more formal and traditional sizing in the exhibition context.

Kian Benson Bailes is an artist based in Sligo.