Entering The Dock, I head for Gallery 2 first; it’s the brightest room and the optimist within me moves naturally towards the light. And it’s spectacular, pouring through large, west-facing windows, highlighting individual works, or casting them into shadow according to its whim. The shifting light messes with the physicality of the paintings too, their luscious impastos emphasised one minute, only to be dematerialised the next. As a viewing experience this is frustrating but also a reminder of the act of painting itself, the painted surfaces remaining vexed and alive, seemingly never coming to rest.

The Dock’s exhibition spaces have proven remarkably flexible, and the team there – including Director Sarah Searson and Visual Arts Manager Laura Mahon – have presented memorable shows by Ailbhe Ní Bhriain, Marcel Vidal and Anita Groener, among many others, in recent years. The presentation of Ní Mhaonaigh’s work is relatively straightforward, the paintings hung alone or in pairs, judiciously distributed between the two main spaces and the mezzanine, where a series of five small paintings provides a link between the larger rooms. Spanning a decade or so (the majority are from this year and 2011) there are twenty paintings in all, marked by their similarities as much as their differences. 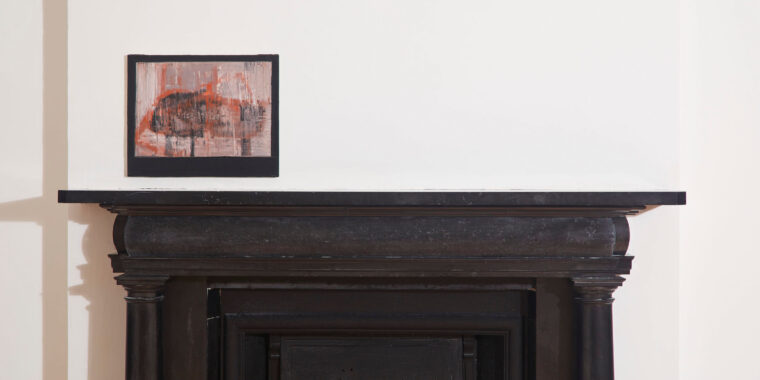 Sinéad Ní Mhaonaigh, Untitled, 2011, oil on canvas, installation view, The Dock; photograph by Gillian Buckley, courtesy of the artist and The Dock

Four paintings in Gallery 2 are called Teorainn (all 2020)1. Their depictions of bounded space are typical of the artist, with borders painted within the physical border of the canvas support itself. The oil paint is applied thickly, with the appearance of being worked and reworked over a long period of time. In Teorainn II striations and layers are made visible by a comprehensive scraping back of the painted surface. Distressed pinks and glimmering yellows have the appearance of a body exposed. Normally accumulative, the painting process is revealed as mostly an act of attrition. The painting shares a motif with its neighbour Teorainn I, where evenly applied strips of grey and pink form a compressed, central stack. These little heaps of paint reminded me of discarded mattresses or piles of old books. I also thought of certain paintings by Phillip Guston, his great pile-ups of shoes and cakes. I’d hazard Guston is important to Ní Mhaonaigh; for his palette and application of paint as much as his journey between abstraction and figuration.

In Gallery 1, where the light is more tempered, an arched recess offers an ideal home for Monument II (2020), the painting’s golden hues and composition of raked, heroic building blocks well suited to hints of divinity inherent in the large niche. On the opposite wall a much smaller painting, Untitled (2011) hovers above a black marble fireplace. The smooth mantle reflects the lustre of the painting’s filigreed skin, bringing both surfaces additionally alive. Elsewhere in Gallery 1, a black and white painting, also Untitled (2011), looks like a large, heavily worked Polaroid, its distinctive black frame as though the borders of the photograph had been reversed. Unlike the scoring technique often employed by the artist – where graphic forms are swiftly drawn into the surface layers – the cartoonish shapes inhabiting this painting have been incrementally built with short, dabbing brushstrokes. While this haptic quality draws your eye into and across the painted surface, the surrounding borders cut off the action like a theatrical curtain, lest you forget that painting is always some kind of act.

The five paintings (all Untitled, 2011) on the mezzanine are lined up above a wainscoting. As though through the windows of a train, their darkly-framed, squeegeed surfaces suggest a passing landscape. Dabbed, dragged and tickled, the paint in Ní Mhaonaigh’s paintings seems always on the move. You sense that she too, is always moving, from one painting to the next, the act of painting an endless, restless enquiry. When a painting is finished, the viewer can take over at last. But this can be a cat and mouse game. Even the best paintings here never seem quite fixed. Their mercurial quality – that sunlight so accentuates – making them lively to look at but also curiously provisional. As a viewer I didn’t always feel privileged with the finished version, as though the painter’s commitment to painting makes her reluctant to let them go.