Joy Gerrard, Sign of Distress Version 1 and Version 2; courtesy of the artist and The Golden Thread Gallery

Originally conceived by Golden Thread Gallery’s director, Peter Richards, and inspired by The Police song, Message in a Bottle, the exhibition ‘Not Alone’ uses a travelling bottle as a curatorial device to reclaim agency in the face of a precarious future as a “powerful act of defiance and optimism from the stranded.” Eight local artists were asked to create an artwork with one rule – it must fit in a bottle. Packaged into said bottle, these artworks are being mailed to different curators’ homes around the world. Using these various domestic settings as a site-specific stage, the works are being documented and exhibited on social media.

So far, this nomadic exhibition has been installed in the homes of curators Chiara Matteucci in Bologna and Manuela Pacella in Rome. At the time of writing, it is currently with Micol di Veroli (also in Rome) and will then travel (provisionally) to Mia Lerm Hayes in Amsterdam, Ciara Finnegan in Heemstede and Gregory McCartney in Derry until December. Its destinations are subject to the unexpected changes of the year that’s in it, and it is intended to travel until June 2021. The exhibition is hybrid in form, as the work is physically mailed, installed and digitally shown – it is being privately exhibited and disseminated publicly online. The viewer’s interactions with the exhibited artworks are fragmented and varied, as intended, through the curator’s social media accounts and Golden Thread Gallery’s website. 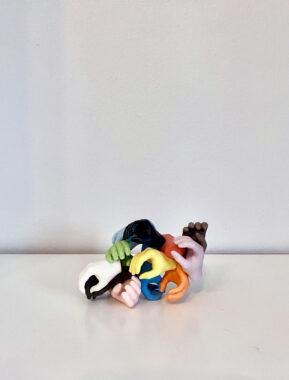 John Rainey, To think about things that appear to be separate, 2020, parian porcelain; courtesy of the artist and Golden Thread Gallery

Manuela Pacella has embedded the artworks within the dailiness of her home. Graham Gingles’ work, Glass Tower – a small glass cuboid sculpture – is contained in an emptied-out cube of her bookshelf. On the shelf next to it is the book, The Cities of Belfast by Nicholas Allen and Aaron Kelly, whose cover features a detail of a photograph from John Duncan’s series, Boom Town. There is a welcomed intimacy in viewing artworks in a domestic situation (and occasionally recognising books) as I peer into her living room from my own.

Matteucci has taken a more formal approach, arranging the works by theme, removed from any clutter. John Rainey’s sculpture of different brightly coloured hands, titled To think about things that appear to be separate, is seen in scale next to Joy Gerard’s black ink drawings of upside-down American flags, Sign of Distress Version 1 and Version 2. They complement each other both aesthetically and in terms of subject matter, with their opposing tones and references to the Black Lives Matter movement.

By favouring physical objects, the participating artists have aligned themselves with the means of travel, as opposed to the mode of distribution. Only one of the eight individual works are digital; Chloe Austin’s video, Kairos, has been sent on a USB drive, with a scroll-text piece to be installed alongside the video. Viewers have yet to see Austin’s video itself, as both curators have only posted image stills of the video being projected and viewed on a television screen. There is a sense of immediacy in knowing that these artworks have been produced under the same restricted conditions that we are all working under. In Ailbhe Geaney’s photographic series, Through a pane  H91X6XN – BT180AJ 3, 7, 8, 9, 12, 14, 19, 20, it’s impossible not to feel connected to the artists’ family, who are trying to make the most of their quarantine at home. For this series, the artist’s mother, father and sister sent photographs of themselves, taken through their kitchen window and framed by wooden panels, which they then sent to the artist, who is currently living in a different county. These photographs have been printed on acetate. One can be seen taped to Pacella’s window.

As a curatorial endeavour, ‘Not Alone’ has gone one step further than other ‘mail art’ initiatives, by posting actual sculptural artworks, as opposed to 2D or text-based work.1 However, as with many online exhibitions, there is a flattening out or equalising that takes place. In this case, each of the artworks are reduced to a poorly-lit image and limited to the 1080 × 1080 px square allowed by Instagram. This leaves a sense of removal between the works and the viewer – a feeling of not having seen the work fully. Indeed, it is early days with a project like this. One can only assume that the exhibition will become richer, the more it is installed, as the repetition and accumulation intrinsic to its travel will be interpreted and reiterated in new and unexpected ways.

Gwen Burlington is a writer based between Wexford and London.