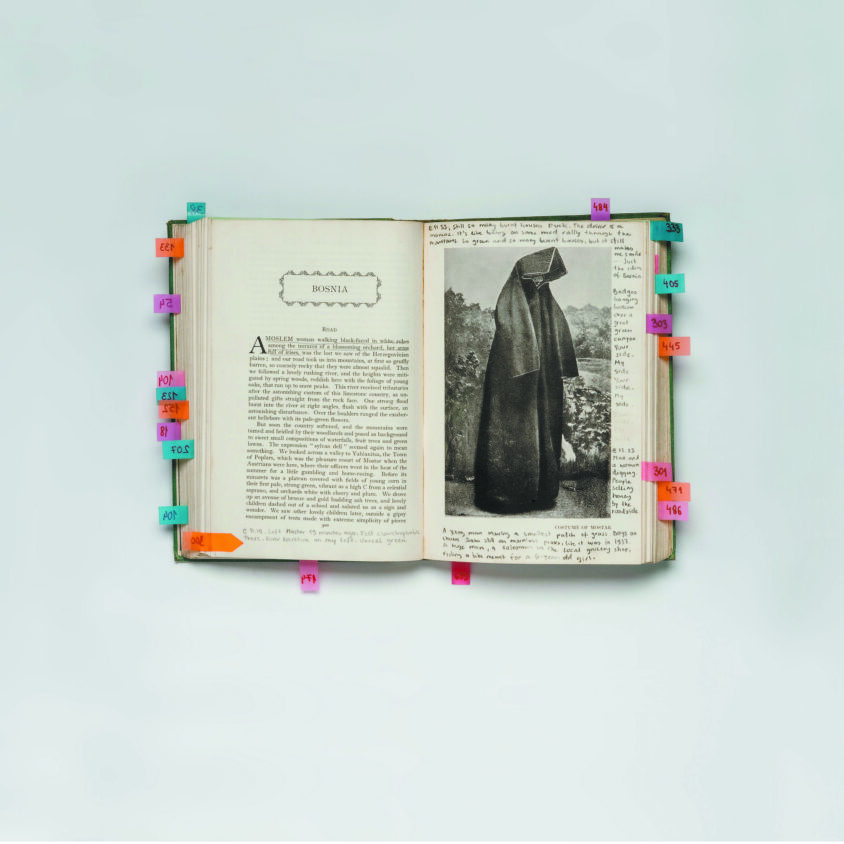 CURATOR SANDRA KRIŽIĆ ROBAN TALKS TO DRAGANA JURIŠIĆ ABOUT HER BOOK YU: THE LOST COUNTRY, AND HOW THE ARTIST’S PERSONAL HISTORY AS AN EXILE DETERMINES HER WORK AND HER PERCEPTION OF THE WORLD.

Sandra Križić Roban: In the last couple of years we have witnessed a surge in the number of publications and research works that deal with the former Yugoslavia. While some focus on the legacy of post-war modernism, and others on the post-1990s period and the social divisions that transpired as a result, there are also a significant number that deal with the writer’s own family history and the pursuit of identity. I want to know about how you came to do it. Why is heritage important to you? What have you found out about yourself during this research, and how did you perceive your own family? Did anything change from the things you already knew?

Dragana Jurišić: I am the child of a Serbian mother and a Croatian father, from Slavonski Brod, a border-town with Bosnia and Herzegovina. Until 1990 I was registered as a Yugoslav. Since Croatia proclaimed its independence I can only register as ‘other’. Yugoslavs have been written out of history. I wondered what happened to 1.5 million Yugoslavs. Where have they disappeared to? I also wanted to deal with the politics of forced amnesia that many independent states of the former Yugoslavia adopted. My memories and emotions about this lost country were very conflicting. I tried to engage with the meaning of identity. Is identity tied to a nation or a place, or can a person build his or her own metaphysical home, one that can’t so easily be annihilated and taken away?

SKR: The need to determine one’s own identity by exploring the past – of one’s family, friends, immediate surroundings, state, and nation – is becoming a global trend. Is it a generational issue? At a time of mass migrations, the uncertainties in the political and the economic realm, what is actually being changed? Is this a case of dealing with personal insecurities or the need to, despite all the instabilities, define one’s personal identity? DJ: It is a reasonable presumption, in this era of globalisation, that the concept of identity as tied to the nation state, is rendered obsolete and redundant. This, unfortunately, is not the case, and we can see that if we look at what happened in the former Yugoslavia. If the national identity is worth killing for, it must be important! What I found out about myself, through experiencing war and losing my national identity, is that this experience, although traumatic, freed me. I believe that people are not trees; the importance of roots is something I left behind. I also learned that nationalism is the ideology of idiots; it points to a significant lack of confidence in yourself as an individual.

I really admire the work of Dubravka Ugrešić, and when you ask this question I am reminded of something she said in an interview with Svetlana Boym: “The identity policy is a toy; it could be benign, it could be dangerous, it could be liberating, it could be enslaving. When people realise that they were given a cheap toy identity, and that the real problems are somewhere else, maybe they will start to search for ways to be equal, not different. Because perpetuating the trauma of repressed ethnic and other identities produces a thick and manipulative ideological fog”. (Ugrešić, 2002)

SKR: Why have you decided to base your research on Rebecca West’s book? Some of her political statements are questionable and subjective. Are her political views important to you, or just the fact that she ventured on a journey that still provokes interest and serves as a kind of a model?

DJ: I find Rebecca West’s Black Lamb and Grey Falcon (1941) extraordinary. It’s a masterpiece of twentieth-century writing. I look at it as a work of art, not as a history book. She said she knew that the country would disappear so she had to write about it (and it did disappear twice since the book’s publication: first in 1941 and then in 1991). Black Lamb and Grey Falcon is a repository of memories, and we all know how factual memories are. Look, for example, at the collective memory of our Yugoslav past and what happened to that?

Yes, I was well aware of some of the exaggerations and inconsistencies in West’s writings. I am also well aware of her politics after the book was published. The key for me is that in this book she never ‘others’ Yugoslavs, unlike the majority of the writers who wrote about it. Some of these writers even used Black Lamb and Grey Falcon as their guide during the conflicts of the 1990s, and still ended up writing patronising and stereotyping publications such as Balkan Ghosts by Robert Kaplan.

YU: The Lost Country is a conceptual artwork in which I present my point of view. It is my personal history. Following the thought that this is a conceptual artwork, I could have invented a story in which Alice in Wonderland came to visit ex-Yugoslavia and documented her fictional journey; it really would not matter. I just chose the book I loved, Black Lamb and Grey Falcon. This book provided me with a map to follow.

SKR: Your book begins with a photograph of a girl at the moment of her becoming a Pioneer. Although you belong to a younger generation, who perhaps did not even enter the pioneers, you use this symbolism that probably has a completely different meaning to you than it has to my generation. What motivated you to open your book in this manner?

DJ: Well, actually, the little girl in the photograph is me. I was 16 when the war started so I did experience that whole narrative and symbolism you speak about. I think constructs like national identity, belief systems and core values are bestowed upon us. These are strong currents to swim in and not many people have either the strength or courage to make their own way. I chose this motive as a ‘beginning’ because the photograph was all shades of wrong: it’s blurry, my Pioneer hat is falling off my head and my fist is clenched. I am looking very uncomfortable with the whole scenario.

SKR: You first studied psychology, and later you started studying photography. What is photography to you? Your book ends with a ‘delicate’ scene captured from a plane. Does photography provide assistance in the transition to ‘other’ states, different ways of understanding? Is it a medium that makes research easier and spices it up with bits of reality?

DJ: Photography contains elements such as fleetingness, which allow it to capture that sense of rootlessness and dislocation with relative ease. I consider myself an exile, because the country I refer to as my home does not exist anymore. There is no home to return to. Both exile and photography intensify our perception of the world. In both, the memory is in its underlying core. Both are characterised by melancholy. As Salman Rushdie said, exiles live “more comfortably in images, in ideas, than in places”. (Rushdie, 1992)

Dragana Jurišic works predominantly through the medium of photography and video. Jurišic has won several awards including the Dorothea Lange and Paul Taylor Award’s Special Recognition from Duke University. In 2013 she completed her PhD and presented ‘YU: The Lost Country’, a critically acclaimed touring exhibition and a book. Her work is in many collections including the Irish State Art Collection.

Sandra Križic Roban is a Croatian curator, art historian and critic. She developed a digital archive of conceptual photography projects and is responsible for the programme at the Spot Gallery, Zagreb. Since 2000, she has been the Editor in Chief of the magazine for contemporary visual arts Život umjetnosti. Roban has authored numerous books including ‘At Second Glance: Positions of the Contemporary Croatian Photography’.

Images: Dragana Jurišic, images from YU: The Lost Country; all images courtesy of the artist