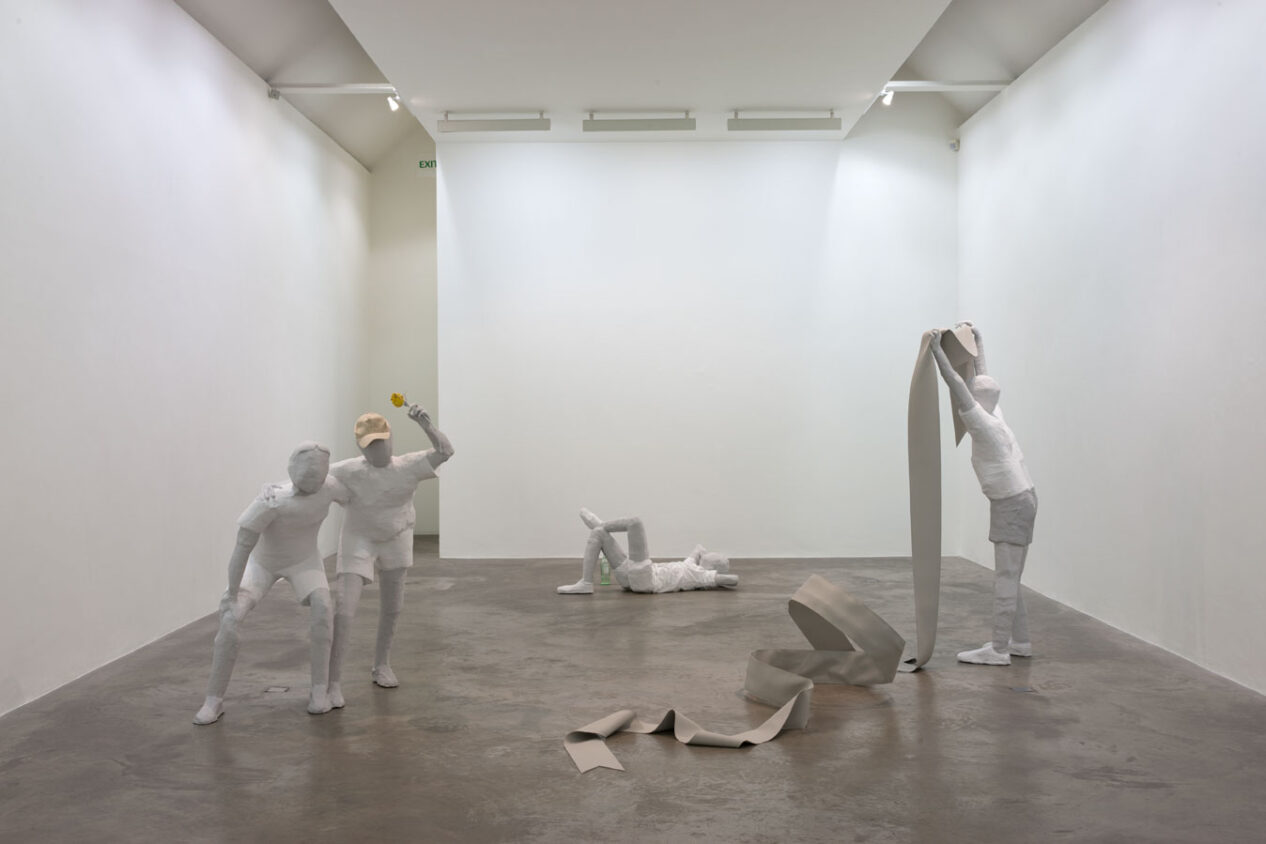 Hannah Fitz’s exhibition, ‘OK’, comprises eight crudely sculpted life-size figures of boys cavorting clumsily around the spartan environment of the Kerlin’s white cube. The premise for the gathering is a mob of football fans on match day, as they crouch, stand, jostle, show off and celebrate, alone or in pairs around the gallery.

One can’t help feeling pity for their rudimentary facelessness and gawky execution in dirty white plaster, while at the same time trying to figure out the relevance of their lumpen physicality and apparent worthlessness. The few props that dress some of the characters – including a pair of runners, a t-shirt, football scarves and a baseball cap – don’t reveal any further insight. Neither do they manage to inject conceptual coolness or visual appeal.

The titles of the works are relatable idiomatic wisecracks – such as HERO, LIAR LIAR or ALL HAIL – that in another artist’s hands would provide layers of metaphorical meaning. But in ‘OK’, they simply collide with the work’s strange and creepy physicality. The exhibition is genuinely weird, ugly and unsettling.

If Fitz is concerned with anatomy, it could be from the perspective of her childhood self. Rectangular torsos and log-shaped limbs look as though they have materialised from a primary school painting. It doesn’t really matter which angle they are viewed from: like pop-up cut-outs, they seem to absorb their own three-dimensional form. At the heart of Fitz’s oeuvre is an intuitive impulse to make art from inside her head, rather than from observation. It is as though her ideas form into arcs of electricity from her mind that are moulded urgently into physical form, while dispensing with formal considerations such as gravity, proportion and weight.

In ‘OK’, the football fans existence is paradoxical and fleeting, not unlike Morph – the stop motion animation from the BBC’s 1980s children’s television show Hartbeat. The smiley, wide-eyed miniature plasticine man could pour, stretch, flatten and roll himself into a ball, yet he always returned to his thickset amorphous form in double-quick time. That illusion of being able to observe the ‘live’ emergence of this little character’s antics is somehow approximated in Fitz’s ungainly figures, who might unravel, flop or crumple into an unrecognisable mass at any moment.

In an interview with Eimear Walshe in 2016, Fitz described how she thinks of groups of her work as forming themselves into a “gang” in which individual works might be “falling in and out of relations” with each other.1 ‘OK’ could be viewed as a failed test of this concept in the Kerlin’s laboratory-like environment. While it is evident that placement is important and spatial relationships are active between individual works, what is not clear is if they really are ‘relations’, or if they are in fact the opposite of relations (if that’s possible).

More likely is that each individual or pair have been compulsively positioned to existentially avoid acknowledgement of each other. They seem only aware of their own singularity, formed in a simultaneous moment of creation in Fitz’s hands, which could just as instantly collapse or disappear without reference to others in the group. Of all of the unsettling aspects of the exhibition (putting aside the coarse rendering and crude limbs) it is this disassociation between the characters that undermines the viewer’s attempts to empathise or understand their relevance or the artist’s intentions.

Though not pretty, an equivocation of Fitz’s ideas is executed in material form. She puts it up to the viewer to think, to examine, and to feel something in the face of her very unattractive work. They are not quite clever or funny enough to be conceptual, nor loose enough to be expressive, nor attractive enough to be lyrical. While Fitz does not come across as self-consciously keeping pace with the inexorable expansion of visual possibilities pursued by some of her peers, she is still well up in the race, casually causing breaches in the pack with her in-between, neither-here-nor-there ideas.