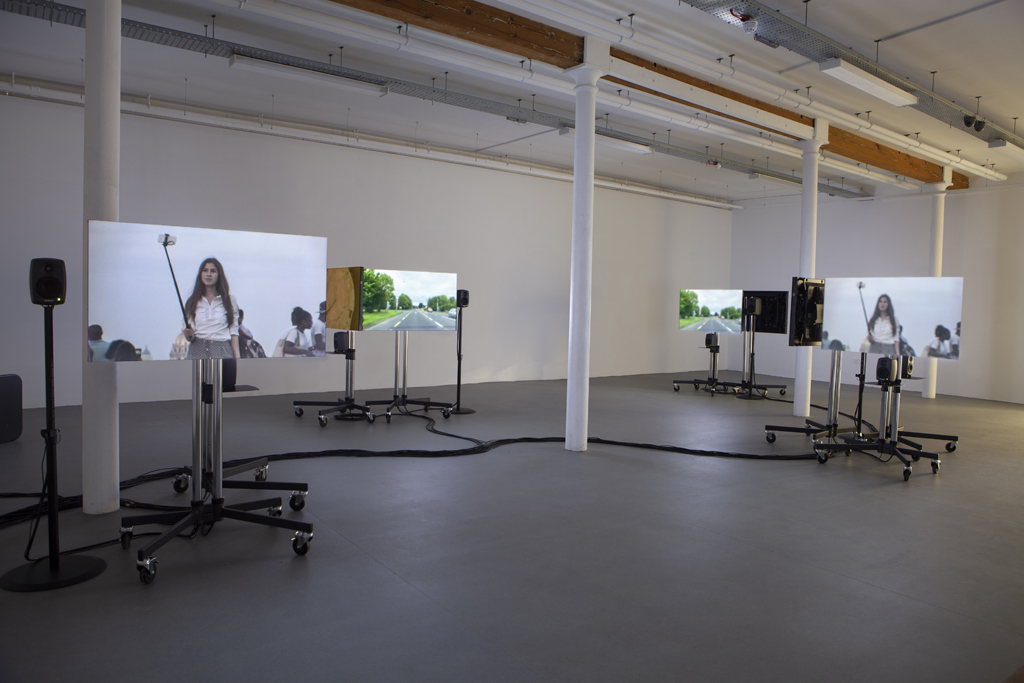 I’m standing in a dark forest. I can hear an ambient rustling and that distinct murmur of the wind, only audible to a fabric microphone. Disconnected rectangles of leaves and sky are visible at eye level; I can briefly feel the forest as I look up towards the grey-blue light diffusing onto the walls. Then a voice declares: “Abort! Lacking power or effect” – and it’s gone.

A forest of identical televisions is installed in pairs throughout Void’s galleries – some are back to back, others at perpendicular angles. Each screen is accompanied by a speaker, either directly below or elevated to the side. The speakers broadcast, in unison, a narrator issuing commands at intervals: “Randomise – Harmonise – Reverse!” The onscreen footage changes from a forest, to a landscape, streetscape or aerial view, presenting scientific data, and a range of other content from a network of contributors across diverse fields. Some footage is simultaneous across the displays (“Harmonise!”), while other footage is spread in patterns, sometimes related and sometimes not (“Randomise!”).

Drawing inspiration from early video-installation work from the late 1960s and early ‘80s, A Visibility Matrix is directed by artists Sven Anderson and Gerard Byrne. Working with an editorial team, they propose a space for crowdsourced video content as an alternative to social media, generating a kind of offline, ‘back-to-the-future’ experience.

A migratory project, it has so far been situated at The Douglas Hyde Gallery (Dublin), Le Printemps de September (Toulouse) and Secession (Vienna), until pitching up here in Derry, at Void. Its evolution has, we are told, been shaped by this journey, but the markers of evolution are unclear: has the content library grown? Have more editors become involved? Have the audio-visual combinations changed? It seems unreasonably difficult to determine this on observation alone – the work’s accumulative nature is imperceptible, its mechanisms obscured. Of course, there is absolutely no requirement for any artist to work with transparency, but if we’re discussing a media platform, the processes become a matter of public interest.

The televisions are physically connected through a bundle of black cables that engorge exponentially as they snake through the galleries, ending in a smaller, darkened space where they separate and climb upwards into an unseen mezzanine. On an adjacent wall is a vertically aligned panel, displaying command-line text that appears to instruct the exhibition through code. But is this an authentic command-line? The syntax is more ‘plain-English’ than any programming language I know of, and the font is proportional, not the monospace font regularly used in programming interfaces. If other critical elements of the project are only referenced, not documented, then why relay the digital backend with this screen of pseudo-code? A large, wooden spindle of black cabling sits next to the data cables but is physically disconnected from them. It’s just there, and unless it has Wi-Fi, I doubt it’s an active part of the system. Maybe its inclusion further symbolises the ‘obscured physicality’ of digital media – a point that is already abundantly made. This final space illustrates the backend of the system in a way that betrays conceptual purity for aesthetic gestures, revealing the ‘hand of the artist’.

Of all the narrator’s interventions, it is the W.B. Yeat’s line “Things fall apart; the centre cannot hold”, from The Second Coming, that stands apart for its poetic gravitas, amid the otherwise prosaic commands. It is the strange fate of The Second Coming to have been absorbed intravenously by popular culture, such that even complete ignorance of Yeats or poetry-in-general is no barrier to knowing what these words mean. Their spectral reoccurrences here, semantically out of place, symbolise the pathology of viral culture.

It is proposed that A Visibility Matrix “speculates on an alternative to the […] subject + smartphone + online-video-sharing-platform” paradigm. It aspires to abjure social media, but the immediate viewer experience actually mirrors it: both are driven by an obscured, proprietary algorithm. The idea of systemic content generation is a priori; it seems accomplished, so long as we respond using the language provided. But if we dissent, there is a messier, more human authorship to be glimpsed amid the occasionally sublime moments that occur outside of the system.