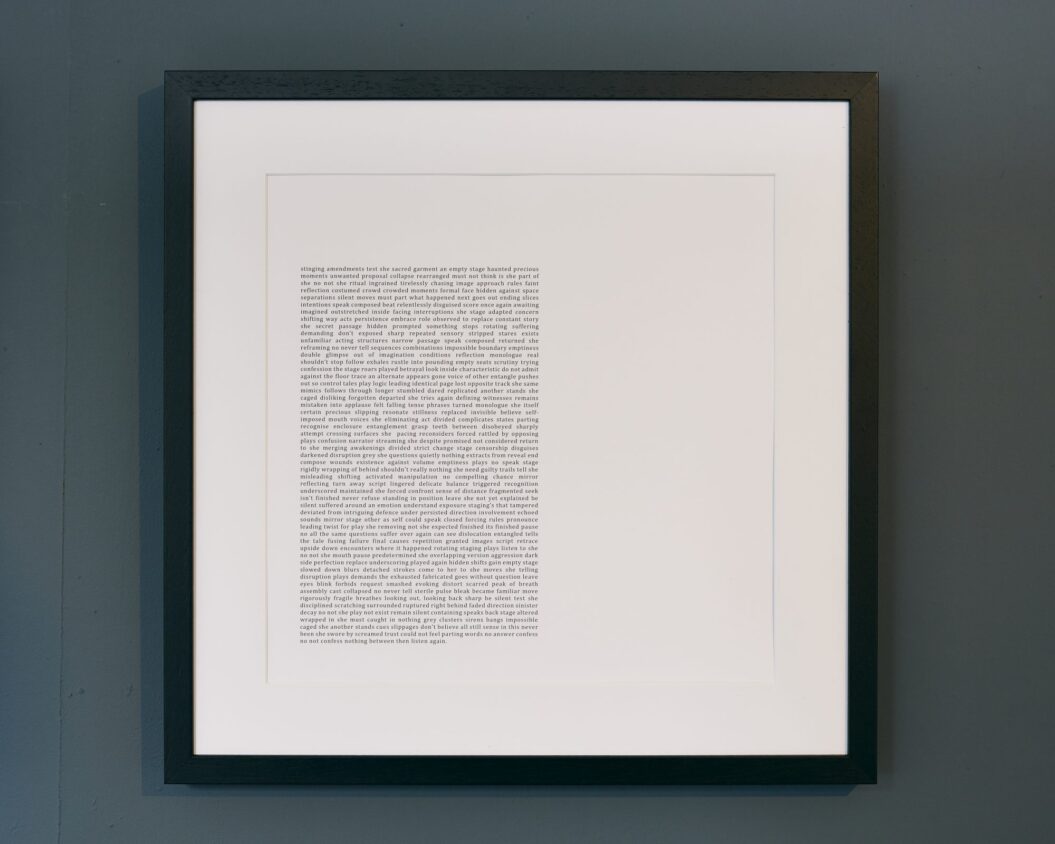 Centre left of stage, she stands, faintly lit, from close-up and below
She is enveloped from head to foot in black.
Behind She, the Other emerges out of darkness.
Motionless off stage three Narrators stand, facing directly across from the stage.
They face front, without deviation, throughout.
An invisible microphone sits beneath each mouth.
Their speech is prompted by a pronounced breath.
Each voice toneless, except where an expression is indicated.
Tempo varies throughout.

The curtain rises, the stage is almost in complete darkness.
Faint spotlights simultaneously illuminate the three faces.
The three Narrators begin to speak.

Justine McDonnell’s sound installation ‘A composition of she’ is accompanied by three framed texts. The first, in the form of theatre stage directions, describes the environment in which it is contained. We stand on the (clumsily angled) protruding grey stage to read and thus find ourselves intruders in the diegesis around us.

There are, though, inaccuracies and omissions. The ‘physical absence of both She and the Other and the lack of curtain and darkness focus our attention on our own critical presence. This brings to mind Walter Benjamin’s writings on Bertolt Brecht’s epic theatre: “For its public, the stage is no longer ‘the planks which signify the world’, but a convenient public exhibition area. For its stage, the public is no longer a collection of hypnotised test subjects, but an assembly of interested persons whose demands it must satisfy.” The second written text is a composed arrangement with the appearance of random selection. Devoid of punctuation or capitalisation, it has the breathless pace and incoherence of Molly Bloom’s monologue in Joyce’s Ulysses, but this does not even pretend to be a stream of consciousness, with its clashes of unrelated grammatical forms and denial of narrative weight. And like Molly’s “yes”, the passage has the occasional appearance of the eponymous ‘She’. With its references to drama and negativity, there is a sense of tragedy and oppression about it, an appeal for sympathy through the panicked, disjointed voice of an asthma attack.

Thirdly is curator Manuela Pacella’s written response to the work – an exercise in self-loathing that makes for difficult reading. Expressing her alienation from the external world and her unhappiness with herself, the stage and its central “funnel” are simultaneously the cause of and release from her existential crisis.

Facing the stage, like Luigi Pirandello’s six characters demanding their story be told, are four audio speakers, from which the three narrators make their proclamations. Reminiscent of the second framed text, the tone, in its atonality, is now however accusatory. The three women address the “stage that commands a construction of She”, attempting to communicate with a language that is formulated to conceal her identity. The work is a call to action, to overturn linguistic norms in order to remove their role as patriarchal instrument: “Lips bound. Raw angst. Can’t break. Scattered words unborn. Drained from the mouth. A sense of unease, deliberately constructed for She. A veil of language to be torn apart.” This Beckettian play from a female voice uses disciplined formal structure to demolish the male framework of gendered language (in her text, Pacella refers to the Italian language’s male gendering of all bodies).

The formal qualities of the self-referential dramatisation of her arguments sit uncomfortably in formal theatrical tradition (despite its adoption of long-established Brechtian alienation devices and Pirandello’s extradiegetic interruption), but sits quite happily in an art gallery, where such considerations have become commonplace. The work, though, has a constructive poignancy about it, encouraging its audience into a critical position toward existing power relations: “An unknown conclusion. It’s never forgotten. A structure that will soon collapse. Smacks of the past deliberately constructed for She. A composition of She hides in every corner.”

Colin Darke is an artist, curator and writer based in Belfast.