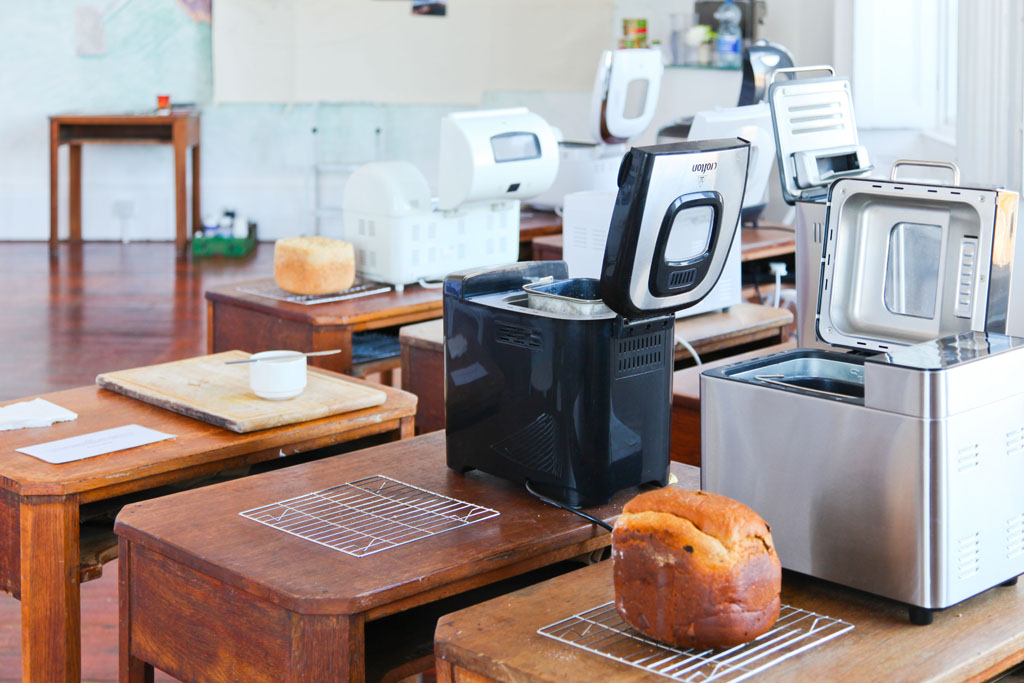 ‘See you Tomorrow’ – an ambitious collection of public projects, led by Australian artists Elizabeth Woods and Kevin Leong – has transformed Sirius Arts Centre into a hub of activity. On first impression, the space was busy and alive, albeit slightly confounding. Bread machines whirred in one corner of the room, while leaflets were scattered across a table in another. A video work depicting a serious looking performance of semaphore occupied one end of the space, while at the opposite end, a pile of booklets lay under a bell jar. Amidst the frenetic activity, I was invited to engage with the exhibition’s bakery and to taste the fresh bread being made onsite – a proposition that allowed me the time and space to digest my surroundings.

‘See you tomorrow’ is impressive in both range and scale. The exhibition forms part of ‘This Must be the Place’, an annual event in Cobh and Great Island that encourages participation in the arts centre’s activities. It is easy to feel overwhelmed by the amount of information presented, yet there is also an underlying simplicity to the exhibition. Literature is provided (with the entire project having been documented by Professor Patricia Hoffie) however, engagement with the gallery staff helped to further illuminate the details of the various projects. Leong and Wood have a well-established collaborative practice, focusing on site-specific and community-based arts projects, with ‘See You Tomorrow’ being one of their most expansive projects to date. Each of the projects involved collaboration with residents and local artists, with Leong and Wood acting as both facilitators and co-creators. The artists’ primary research began in 2016, when they conducted interviews with locals, posing the following two questions: What would you like to change about Cobh? What would you like to keep? These recorded interviews – entitled Evolution Interviews – were screened as part of the exhibition. In addition, the different concerns raised by interviewees were mapped out statistically and displayed on the gallery wall, providing a useful visual aid.

Two new publications aimed to promote a positive relationship between the younger and older communities in Cobh. The booklets were developed in collaboration with artist Peter Nash and emerged from workshops with local youth groups. Elsewhere, a video performance by local artists Lynne-Marie Dennehy and Nicole Flanagan, titled Sign Bearers, saw the artists using flag semaphore to communicate a poem. As Cobh is a maritime town, the visual language of semaphore is part of the local heritage. This project articulates concerns over the loss of traditions and identity within the community. A hieroglyphic, digital-looking translation of the poem – which imagines the mythical Hawthorn Tree awaking to a future Ireland – was displayed on a wall adjacent to the video. This project also assumed an autonomous identity during the exhibition, with the artists performing at various locations in Cobh town centre.

To the right of this screen, were chairs and a table, suggesting the remnants of another performative project. A series of election-style posters occupied the wall, detailing a public event, titled The Long Table. As part of this project, politicians running in the local elections were invited to speak at the arts centre. Each candidate was given the opportunity to discuss their plans for the future of Cobh. The concept for the event originated from concerns raised by interviewees about a widespread disillusionment with local politics. This project also brings the political motivations of the exhibiting artists to the fore, with the philosophy that the ‘personal is political’ resonating throughout the exhibition, through a social examination of the Cobh community.

Addressing a similar concern was a real-estate style display of vacant buildings in Cobh. Images of each property were accompanied by textual descriptions of imagined future purposes. ‘The Vacant Building Appreciation Society’ accepted submissions from locals, who dreamed up everything from alternative nightclubs to activist art collectives. In addition, a large-scale mural by artist Mark Hathaway is slowly being completed during the exhibition, adding a further sense of activity to the space. Another project, ‘The Green Light’, invited Cobh residents to participate in installing green lightbulbs in the gallery – a wonderfully simple gesture signalling that they are giving the ‘green light’ to the future.

Sarah Long is an artist and writer based in County Cork, who recently graduated from Crawford College of Art & Design.