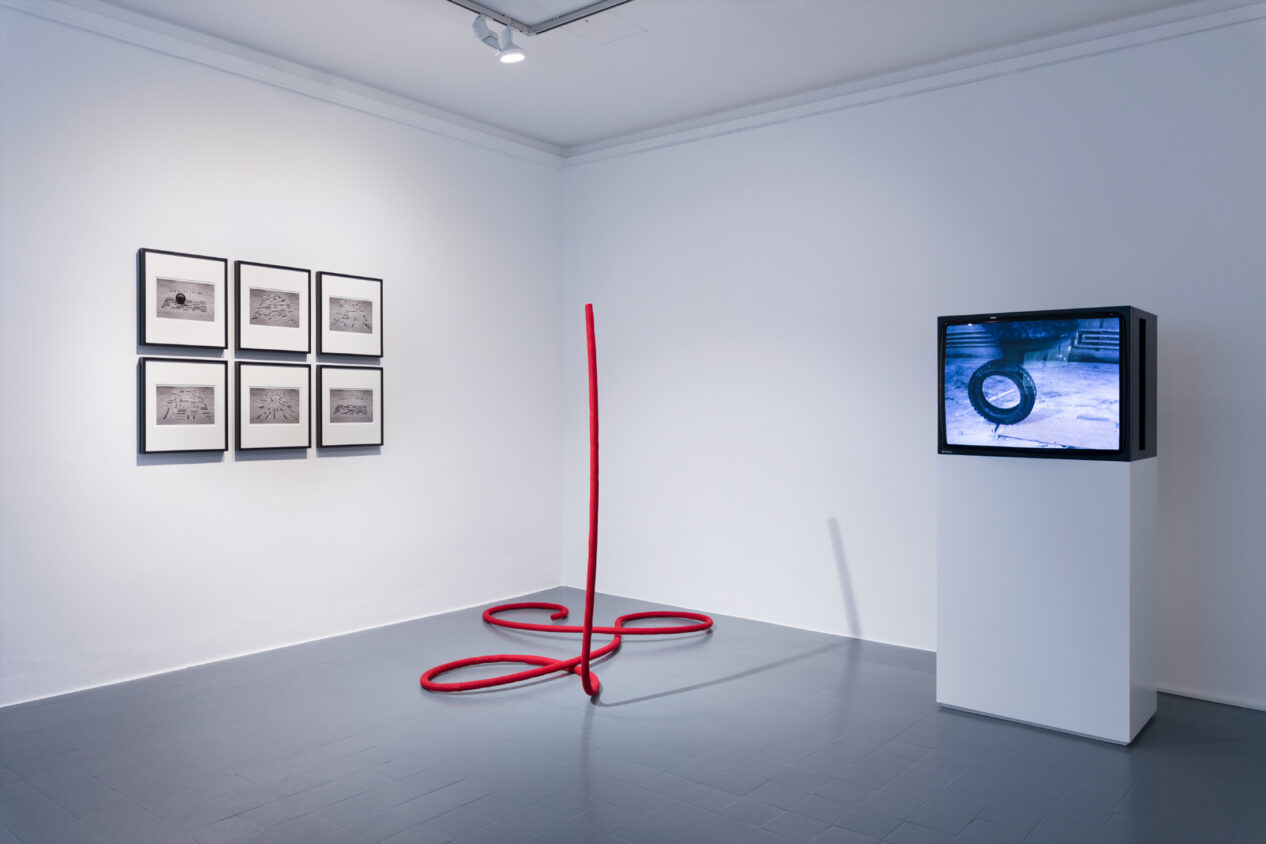 Though the work took three days to film, the resulting footage was meticulously edited to imply a single take, and ever since, it has held up to extensive scrutiny. For ‘The Way Things Go: An Homage’ at the Butler Gallery, curator Anna Sullivan invited nine artists to respond to this seminal work. Some made new artworks, while others present existing pieces that illustrate relationships with the original source material. Located in the basement of Kilkenny Castle, the gallery comprises a series of interconnected rooms – a spatial configuration that affords a gradual unfolding of artistic responses.

The gallery entrance is home to Come and enter the Void with me – an installation by Japanese artist Atsushi Kaga featuring comic book-style works painted across custom-built partition walls. The chief protagonist is a bitter and confused bunny (reminiscent of the nihilist rabbit featured in Matt Groening’s comic-strip Life in Hell). A disjointed narrative sees Kaga’s anthropomorphic rabbit interacting with his friends, including a one-eyed cat, evoking the bittersweet machinations of the everyday. The installation is topped off with a series of glittery donkeys and cats, which act as castellation for the structure, while giving sculptural form to the artist’s imaginary characters. Inside the gallery, The Way Things Go is presented alongside two works by Isabelle Nolan. There will be time no longer is an exquisite cursive of red wool ‘cable’ in the corner of the room that loops through space, as if describing kinetic arcs. It brings to mind the hypnotic effect of a dancing cobra, poised in mid-air. An adjacent series of black and white photographs considers ‘provisory rug designs’, loosely configured on the floor using blocks and wedges, illustrating the artist’s profound understanding of structure and form.

Maggie Madden uses materials of such delicacy and subtly they may almost not exist. They beg the viewer to closely inspect their form, such is their demand for exploration. In Madden’s work total internal reflection (2016), a simple loop of optical fibre and telephone wire resembles a lasso or even a noose. Deftly suggesting an unseen threat, it radiates a power at odds with its simplicity.

More well-known for their junky assemblages of salvaged materials, both Nevan Lahart and Liam O’Callaghan depart from their habitual approaches to present a large oil painting and a series of five c-type photographs respectively. Lahart’s sepia-toned monochromatic painting, Overpainted Underpaint, depicts a kind of nihilist teddy bear’s picnic: humans are dressed as pandas and tigers; a tree plays guitars, serenading a coterie of laughing cats; the severed head of W.B. Yeats is pumped with fluoridated water – and more. It’s a mysterious and compelling vignette, overloaded with cosmic allegory and stuffed with metaphysical symbolism. O’Callaghan’s photographs, Designs for public monuments that won’t happen (dumb series), depict maquettes of structures made from an assortment of random materials including Jaffa cakes, timber blocks, cardboard packaging and plastic eggs. These ad-hoc arrangements have been doused in viscous glossy paint and tantalisingly documented in luscious colour.

Using words, quotes and textual fragments is a familiar trope in Johnathan Mayhew’s work. For this exhibition, he presents aphoristic snatches of text on a monitor, against a background of spoken word, barely audible in this space with competing sounds from other artworks. Different Thoughts Various Evenings (2017) explores what Mayhew describes as the “points where quantum realities, physics, literature and poetry might intersect”, and its simplicity is profoundly moving.

Referencing the meditative allure of The Way Things Go, Caroline McCarthy’s MANSIZE is a real-time video of tissues being removed one by one from a large tissue box. Meanwhile, Aideen Barry employs her signature combination of drawing and animation to detail aspects of domestic drudgery. Presented via mini-projectors, and so it goes (2017), speaks to Fischli and Weiss’s industrial concerns with the more quotidian realities of the exhausted homemaker.

This domestic response is echoed in two new works by Hannah Fitz, Candelabra and Rose – synthetic decorative objects made from PVA glue, epoxy resin, paint, wire and paper. Rose is gleefully presented on the gallery floor as a sickly red puddle containing a long-stemmed rose surrounded by shards of a broken vase. With such strong responses to The Way Things Go, the work is once again reaffirmed in its role as both instigator and enduring reference point. Perhaps in another 30 years, it may play this role anew.

Anne Mullee is an art writer and curator of the Courthouse Gallery and Studios in Ennistymon, County Clare.