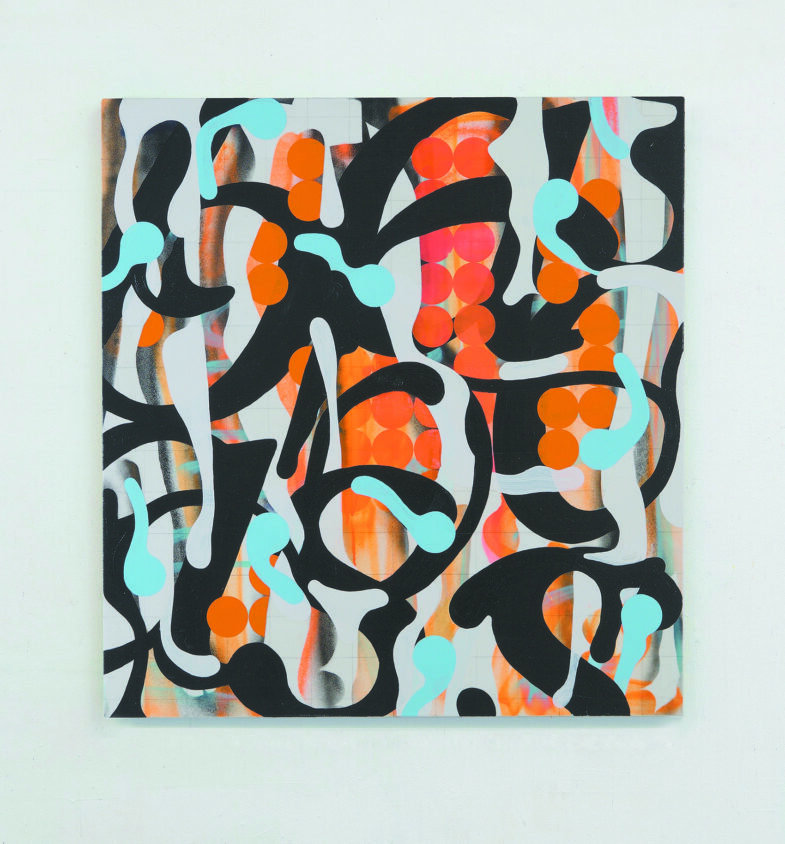 Martin Herbert: Perhaps we could start with a simple question: Why did you choose the title ‘Strange Attractors’ for this exhibition?

Ronnie Hughes: As some people might know, it’s a term from Chaos Theory. I’ve had a layman’s interest in science and science fiction for years. Attractors are determinants within a given system that cause it to take a certain kind of form, while a strange attractor is one that has a fractal dimension. It’s a sequential or mathematical relationship, in part, that I like to use as an analogue for what happens in the paintings. For years, chaos was something that people didn’t understand. It was mystical, immeasurable and awesome in a fearful way. The natural entropy that builds in a swinging pendulum was largely ignored by Newtonian physics until someone recognised that there is a pattern that goes behind things. That sense of a pattern running throughout existence is something that I have always been fascinated by.  It’s something that’s central, not just to art, but to all branches of human activity: to try to make sense of the mystical. But then there’s also this implied pun, that I see the paintings themselves as strange attractors because they are quite colourful and optically interesting, as well as there being a strangeness about why they exist. MH: Something that is relatively consistent is that you work with geometry, but it’s a very humanised geometry: your grids are off and things that look very regular to start with have this humanised quality. Is that an autobiographical impulse?

RH: It may be. I had a very particular early life in terms of where I grew up. There’s no question that for anyone being creative, there are always forces that are trying to express themselves. I do feel that, even though I make abstract paintings, they are very definitely expressive. When I create a painting that I momentarily feel is successful, it’s usually because there’s a moment of tension in it. I’m always aware of the onset of a system falling apart, or of a sense of entropy or violence suspended, and that’s a recurring note in my work.

MH: Why circles, for example?

RH: There are a number of motif type things that happen in my work, such as geometrical lines, grids, triangles, circles, spheres and occasionally ellipses. To create an agency in people’s minds, you have to create a figurative situation. I used to make these lozenge or ovoid type shapes, which I think came from the west of Ireland landscape. I see circles as primary shapes that are very nonreferential, but they start off as a kind of pulse point. When you paint a particular colour, it’s there as a kind of energy. Colour is a very important aspect of my work and colour is always very relational; it doesn’t exist by itself. Certain hues become notes that you can’t deal with. You have to make things more subtle or nuanced, shift them sideways or make them come alive in some way.

MH: Your works have the feel of diagrams that don’t explain anything and that unravel as you look. There’s quite a lot of doubt in these works. Is this personal or universal?

RH: I was born in 1965 and there was this sense, in the books I read as a kid, of a futuristic utopia. I used to fantasise about Disneyland, where you could find hover-rail trains, automated robots and so on. I was also an avid Star Trek fan. I take pleasure in diagrams and graphic designs from the 1960s, which manifest in the work, but are counterbalanced. I often create structures and expectations but then undermine them. I paint something that looks like a grid, then you realise it’s not a grid at all – it’s been knocked sideways in some way. I think painting, compared to many other artforms, is very slow, in terms of how it’s made, but also in terms of its reception. Ideally, you’d like to be in front of a painting time after time and let it unfold in different ways. That’s the way I make paintings, hoping that they will unfold in that way, but accepting that people don’t always have the chance to experience them like that.

MH: How do you start a new painting?

RH: When I was younger, I would start with an idea or an intention, but that doesn’t really happen too much anymore. It’s quite random in some ways. I usually work with wood now, and there may be little glitches on the wood, so that’s enough for me to see if there’s a pattern between the notches. I’ll mark them and draw lines between them or separate them and that’s how it starts. In my paintings, there could be all sorts of layers happening underneath the finished surface. I work in a certain way that means I can pour paint over the surfaces so I can suppress things completely. I’m always fishing around, waiting to find something. If it doesn’t work out, you can sometimes turn it in another direction and find interest elsewhere.

MH: Do you have a consistent process?

The thing about the process is that you can’t decide to make a specific painting, because you can’t even imagine it at that stage – it hasn’t previously existed in any way, even as an idea. I have a painting wall in my studio and I work on multiple paintings at once. What looks like a random bunch of colours, I’ll often fret over for months, trying to get certain shades that appear in a balanced sequence. Painting is very much about material. The main thing that’s special for me about painting is the haptic experience and the touch quality of someone making something. I very much feel that a painting is a handmade object. It’s very different from seeing a reproduction of an image on a screen. I’m interested in play when I’m painting. There are not really tremendous rewards from being an artist a lot of the time, but one of the greatest rewards is when you can be involved in your own work – that’s a fantastic and important aspect: to spend time doing what you enjoy.

MH: The classic question: how do you know when a painting is finished?

RH: Very few paintings are safe forever. If they come back to the studio, they can often be changed. These days, I typically stop working on a painting for six months before I let it out of the studio. If I’m in the studio and I feel that I’m doing something habitual then I’ll try and knock it sideways, spoil it or add something, to try and give me a different set of obstacles to work with. The problem is that after a certain length of time you can’t but help end up making things that look like your work, no matter how hard you try to avoid it! But that’s a paradox that most artists have to deal with.

MH: You live in rural Sligo, yet the colours in your recent paintings are very synthetic and almost deliberately artificial. When and how did this element enter your work?

RH: When I moved to Sligo first, all these forms, shapes and colours from the landscape came into my work. I didn’t really recognise it at the time, but I can see it very clearly now. Over the last eight years, the work is just getting more artificial in terms of the colours and the colour relationships. When I made the switch from working with oil paints to using acrylics, my main focus for a while was making them look like they were oil paintings, which I realised one day was quite ridiculous. I’m interested in this idea of plasticity and using a plastic medium, so at one point I just decided to be a bit braver about the colour that I would use.

MH: Are you interested in acknowledging known paradigms in abstract painting?

MH: Am I right in saying that the most recent works in the show are all drawings?

RH: I typically can’t work on two things at one time. If I’m painting, I’m painting. I’ve been working quite intensely for a long time, so I took a break and decided to do some drawing. Drawing is interesting because you generate things in a different way. The drawings in this show are small scale and were made quite quickly. Some of the drawings may have taken up to a week to make, which is nothing compared to the five years it can take to bring certain paintings to fruition. For me, drawing and painting are separate, but drawing is implicit in painting anyway. It’s very difficult to get away from the idea of drawing.

Martin Herbert is a writer and critic living in Berlin. He is associate editor of ArtReview and a regular contributor to Artforum, Frieze and Art Monthly. Ronnie Hughes is an internationally-renowned Irish artist who lives in County Sligo where he is a lecturer in Fine Art at Sligo Institute of Technology.

This interview is an edited version of a public conversation that took place between Ronnie Hughes and Martin Herbert on 15 April 2017 at The Model, Sligo. ‘Strange Attractors’ is curated and toured by The Model in partnership with Limerick City Gallery of Art and the Royal Hibernian Academy, Dublin. The project has been supported through the Arts Council’s Touring and Dissemination of Work Scheme. The exhibition was previously presented at The Model (16 April – 22 June) and Limerick City Gallery of Art (29 June – 27 August) and will show at the RHA, Dublin, from 7 September to 22 October 2017.