CHRISTOPHER STEENSON INTERVIEWS ENDA BOWE ABOUT HIS MOST RECENT BODY OF WORK.

Christopher Steenson: Your latest exhibition, called ‘Love’s Fire Song’, is currently showing at the Gallery of Photography in Dublin. This project focuses on young people living in both Unionist and Nationalist communities in Belfast. What drew you to working in Northern Ireland?

I got in touch with a photographer in Lurgan, called Tony Corey, who went to the same college as me in Blackpool and asked if I could visit him. I ended up staying with him and his family for a couple of days and he showed me around. I experienced being stopped at a car checkpoint by soldiers and being told not to speak because of my Irish accent. We also went to the different estates and it was the first time I saw kerbs painted with red, white and blue – or green, white and gold, depending on where you were. Unfortunately, I didn’t have the insight at the time to see these territorial colours as interesting images. Also, Tony kept saying to me, “Enda never take your camera out”. It was only years later that I saw Paul Graham’s photographs from that time, which documented those kinds of things. One evening, we went to a Catholic nightclub, which was the most bizarre thing.

The next day shaped a lot of things for me. We went to a Nationalist estate and I noticed the young children were wearing green tracksuits, while in the Unionist estates, all the kids were wearing red tracksuits. That was my answer. From a very early age, our minds have been made up for us, in terms of identity. I didn’t realise it then, but that trip has filtered into everything I’ve done since. In my photography, I tend to pick unremarkable areas that are a bit grey and try to find the colour and brightness in them. The red and the green in Lurgan has evolved into cherry blossom, like in my ‘Clapton Blossom’ project, where the colour represents the vibrance of the community. Leading up to ‘Love’s Fire Song’, I wanted to focus on the colour of youth culture – the vibrance and possibilities – either side of the peace wall, rather than on the politics. Even though the border between the North and South had become nearly invisible, there are people in Belfast who were still living on either side of the peace walls. I wanted to hone in on the subtleties, passing through the politics and looking at the kids there without judgement. 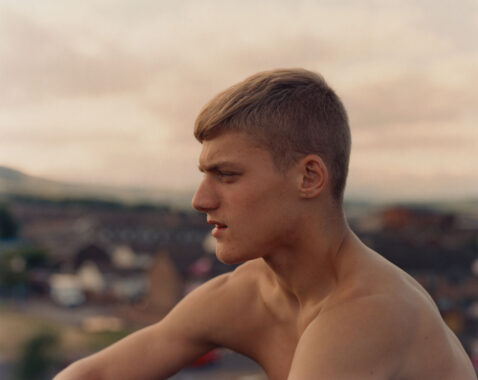 CS: Growing up in Northern Ireland, I know that communities in Belfast can be extremely wary of outsiders. They have a heightened awareness of how they can be negatively portrayed by the media. Can you discuss how you foster trust with the people involved in your projects?

EB: When I made my first visit to Belfast, I didn’t know anybody there. I was just walking around. It didn’t go particularly well. I went through one estate and had stones pelted at me. It’s just what the kids do, if they think you’re not from there – it’s inherited belief. I did take some pictures but they ended up getting destroyed by the airport x-ray machine when I was flying back to London. After that first visit, I realised that I really needed an ‘in’, so I contacted a producer I knew, called Louise Liddy, who introduced me to someone called Paul Shaw, who worked in a flag shop on the Shankill Road. I explained to Paul that I wanted to do a project on youth culture in the Shankill and Falls about their overlapping lives. He wasn’t sure about me at first, but eventually agreed to bring me around a few estates. He introduced me to a few people who sort of looked over each estate, telling them to look after me.

After that, I knew I had to just go for it. I went to the Shankill estate on my own and walked up to a group of kids sitting around a fire and said “alright lads, how’s it going”. Luckily, there were a few really decent lads there and they sided with me straight away. They had just graffitied “Free the Shankill Six” on the wall, because six lads had been arrested for robbing pallets for the bonfires. But by the end of the night, my name was graffitied on the wall too! So that was the beginning of the journey. For the next couple of weeks, I was hanging around those places, but I didn’t take any pictures. It was just about slowly getting to know people. Spending all night at the fire is a commitment, and I sometimes wondered why I was doing it. But every time I came to the end of a trip, I realise why. Because you enter worlds, which you never would have entered; you become friends with people you were told you might not be friends with. You have these experiences and hopefully you create something along the way.

CS: The photographs have a very vibrant orangey-gold sort of colour to them. Were they taken during the golden hour?

EB: Yeah, I’d mapped out exactly where I wanted the sun to be. I wanted a low-ish type of light, so I’d get modelling and form going on from left to right. And obviously for the night-time stuff, if it wasn’t a hot night, it was miserable. A lot of my favourite photography is American photography and I’ve studied it well. What I like about American photography, especially in the south for example is that everyone looks really still. But, of course, you realise they’re just so hot! They are happy to stay there and be photographed. Whereas we’re all tensed up when it’s wet and cold, so it was really important for me to have warm weather. When people are relaxed, you get down to a more open self. The estates in Shankill and Falls on rainy days are not very positive at all, so I consciously wanted my photographs to be shot in bright light. There were several days when I couldn’t photograph anything because it was rainy or grey, which wasn’t right for the project.

CS: The summer is also a very active period in Northern Ireland, in terms of important events that happen in the different communities. Does the work cover the different bonfires?

EB: Yes, it does. The two main bonfire nights being 12 July and 8 August. But I wasn’t overly interested in those dates. I was shooting a couple of weeks beforehand, because that’s when all the activity happens. I was interested in people being together. These kids are from such poor areas and there’s nothing for them to do – no skateboard parks or anything. This is the highlight of their year. They’re most excited about making the structures, collecting pallets and all the mischief. It’s also about manhood. You have the four-year-olds dragging rubbish and passing it to the teenagers, who are climbing up the piles. And then you have the early 20-year olds on the top. If you fall off, you’re dead. Older men are looking up and shouting advice, but everyone is getting approval from one another. So, I photographed in the period leading up to the bonfires. The big nights weren’t my priority at all.

CS: These photographs are quite candid, in how they’re shot and composed. I was wondering whether they are staged in any way, or if you take them on the fly, while everybody is busy?

EB: I usually have a certain type of concentrated image or picture in mind that I want to create. It’s not about grabbing photographs – I want to create a pause in time. So, I’ll be patiently waiting, often for days, before I take a picture. There’s often a certain person I’m looking at and have in mind. During my teenage years, I was shooting 35mm, then for all of my 20s, I was shooting 5×4 large format. Now, even though I predominantly use medium format and handheld, I take that training to everything I do. Shooting large format is very similar to how a painter would work, in compositional terms. You have to decide what the picture is going to be before you take it out of the bag. It’s too cumbersome to use any other way. So I ask the person and bring them to the spot I have in mind at the right time; I mould it very quickly to get the subject into that place of quietness and stillness. So, it’s kind of a mixture of reality, because I’m not bringing models to a set. I’m going to places and waiting for things to surface. It’s not just a document – it’s about the atmosphere, space and feelings. I want the photographs to fit together as a sequence, like stills in a film. 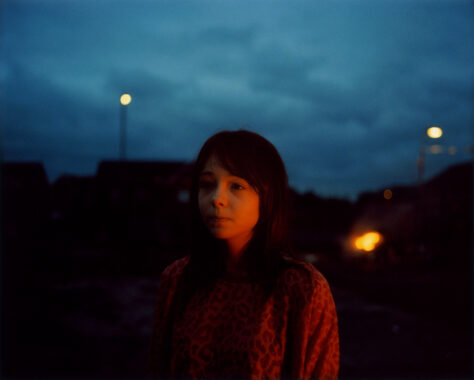 CS: When do you know it’s time to finish a project like this?

EB: That’s a really good question and a hard one to answer. The last trip I made to Belfast during the summer of 2018 was such a positive experience. My dad, Thomas Bowe, had died six months earlier without much notice and through his passing, I asked myself: “What are we all scared of and why do we put so many blocks in our lives, when we just have to say yes?” I think my dad’s energy was with me when I returned to Belfast and I was a lot more open than usual. And when the possibility came up for me to climb one of the bonfires, I knew I had to do it. The bonfire structure was huge – 25 or 30 metres high. There we were, up on the top, me and the three other lads. We were just looking at the sky and the view over Belfast, and I thought “I don’t know if this can get better”.

It was on top of that bonfire that I photographed Neil Ballantine. That photograph got runner up in the Taylor Wessing Portrait Prize in 2019. That one image has made quite a shift in the whole project and it felt like a conclusion. I wouldn’t be making this exhibition if I felt the project wasn’t whole, or if there were any gaps. But of course, there’s always part of you that wants to do more. I have other possible projects that have since come to light from my experience. There’s a series of short films, as well as a project based around one person that I’d like to pursue. I might revisit the estates and do a project focusing more on the women there. Either way, I will keep my connections in Belfast, because I now have friends in both communities.

Enda Bowe’s exhibition, ‘Love’s Fire Song’ continues at the Gallery of Photography Ireland in Dublin until 16 October. A photobook of the project is being launched on 8 September.
endabowe.com
galleryofphotography.ie