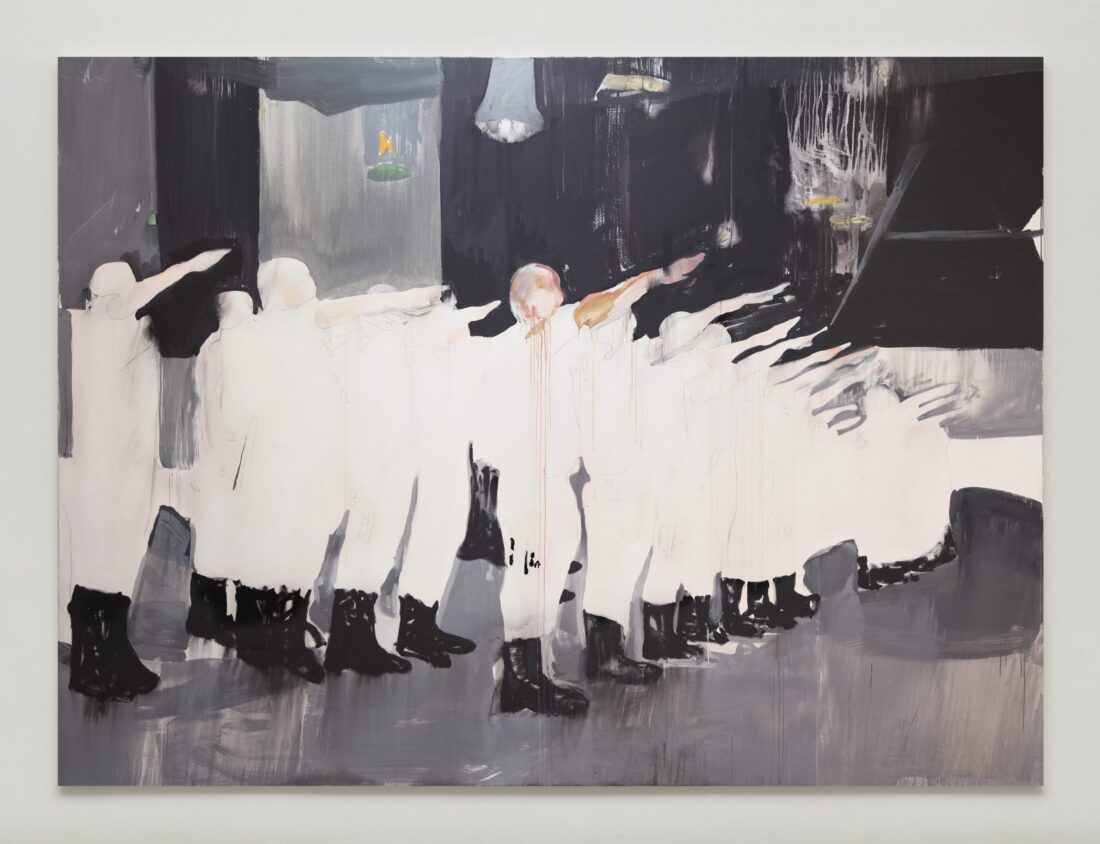 Joanne Laws: ‘The Aleppo Paintings’ depict the crumbling buildings of the war-torn Syrian city. Can you describe your motivation for this work?

Brian Maguire: I was very interested in the Syrian Civil War. I was reading texts by Patrick Cockburn, which made me think about how the Irish Civil Rights Movement was militarised and sectarianised. It became about Catholics and Protestants and was taken over by the military, yet it began as a civil rights movement, just as the rebellion in Syria began as a peaceful movement and very quickly became militarised by armed gangs. It also became sectarianised, meaning that people of different faiths could only live within certain areas. With these paintings, I’m not making any statement about who did what to whom, because I don’t know. This series evolved from a painting I did for the Kerlin show in 2016, of a destroyed apartment block in Aleppo. The motivation was to finish the argument.

JL: At such a large scale, the paintings feel very immersive – was that your intention?

BM: Yes, that’s necessary. The Paris painting studio I’ve used since 2010 is big enough to make work of this scale. You collect the information and you come back. What is the information? Well first of all, your memory – I always think that memory is the best editor. I took hundreds of photographs that were slowly whittled down to just a few, to be blown up and printed. This system seems to work for me.

JL: In contrast to your previous series – which focused on the refugee crisis – these scenes are bereft of people. Why is that?

BM: It’s because the place is bereft of people. There’s a war there, with not just two sides – more like 22 sides. People are being bombed out of their homes, so that’s why the refugees are coming across the Mediterranean Sea. When I finished the 2016 series, I realised that if I wanted to do more, I had to go there and immerse myself in the place, if only for a short period of time. I painted the bodies of three Mexicans who had been shot by criminal traffickers while attempting to cross into the US. What was interesting about that painting is that when people looked at it, they said it reminded them of the image of the Syrian child washed up on the beach, but the painting had actually been made six months earlier.

JL: With the title of this show, ‘War Changes Its Address’, are you implying that the narratives of global warfare are very much transferable?

BM: I have years of experience in civil war conflict – I was involved in the one in Northern Ireland, with the Tamils in Sri Lanka, in Brazil I observed an undeclared civil war between rich and poor and Mexico was similar. In these circumstances, I don’t feel free. Really what I wanted to show was the effects of war – full stop. I was horrified by that piece with the ceramic poppies to commemorate WWI, because it excluded the German and Austrian dead. That artwork was still fighting the war, suggesting that only our dead counted. I fail to understand WWI in nationalist terms; for me, it was working class men on both sides. If you look at these paintings, you wouldn’t know who did the attack or who placed the explosives into each building. This is purposeful because I just wanted to stand back, in the same way that I can stand back from WWI and just see it as an unmitigated disaster. In 20 years time, if I’m still alive, I guarantee you I’ll be reading about some other city, bombed to a fucking tinder box.

JL: It’s horrifying to observe responses from certain western countries, who profit from the sale of arms to these regions yet are the first countries to close their borders to refugees. Does this kind of geopolitics influence your research?

BM: There are two major arms fairs in Paris and London each year. My attention was drawn to them because the Irish Quakers who demonstrate outside these fairs often sleep in my Paris studio while they’re visiting. They brought me back the arms catalogues and one in particular struck me – a top-of-the-range personnel carrier. The text was terribly revealing, stating that this personnel carrier could carry nine “units”. We’d call them people – maybe soldiers – but the production people who are selling this machine describe them as “units”. Now, if they can do that with their own, what chance do civilians have? This is the language of war and the people who sell into war. There are no victims because there are no people in this world, just cash. So that was very illuminating for me. JL: Is it true that in Mexico, you saw rifles similar to those used in the north in the 1970s?

BM: Oh yes that’s true, but it was more than that – it was the whole military infrastructure. The first night I drove over the border, I stayed in the Ramada Hotel in Juarez. The NGO I was working with advised me that this was the safest place, because there were no cops staying there. The cartels have since taken over that hotel. The first thing I saw was an open-backed truck full of soldiers. There were also black Land Rover pickups, with police in black uniforms in the back, and machine guns mounted above the cabins. In Belfast, in the 1970s, that’s how the British Army arrived, and when the RUC fired on the Shankill or Falls Road, it was from those kinds of vehicles. I said: “I know this kind of place – I’ve been here before!” So it was familiar – I almost felt safe!

JL: For me, Police Graduation (Juarez) (2014) remains one of the most important Irish paintings of the twenty-first century. Where did the image come from?

BM: I got the image while doing a residency in a newsroom in Juarez. I asked the editor if I could go through his archives and I found photographs documenting the graduation ceremony of the protective police. I recovered the image from my own archive years later, around the time that 43 students were disappeared and killed in Mexico. It’s incredible, because they were just trainee teachers demonstrating about the law being changed. I saw many demonstrations while I was in Mexico – they are normally very banal and cheerful, like fucking carnivals. But it became very violent for them that day, and I knew this painting explained why. It’s unbelievable that a fascist salute would be used by cops.

JL: Did the strong social conscience that underpins your practice come from your work in prisons?

BM: I was always involved in communist ideology as a young person. I got teaching in prisons on behalf of NCAD, so ended up mostly dealing with incarcerated working-class men, sometimes women. For me, Ireland was very simple – if you were from a particular place, the chances were high that you’d end up in jail, but if you were from another area, chances were, you’d go to university. These were the major institutions of the state; one for the lower classes and one for the middle classes. I began to see society in this way, based on what I learned from the Marxists, in terms of class structure. I didn’t go to prisons in Damascus and I wouldn’t say I’ve completed my research until I have. JL: You have previously described painting as a “gesture of solidarity” or as “an act of revenge” for some form of injustice. Can you explain this?

BM: Remember we talked about memory being an editor? Well, for a long time, the feelings that returned to me were feelings of anger, so this became the source of the work. I get very fucking angry when I see something like this. How did those people manage to get here? Why did they kill this girl? It’s a separate question as to who the anger is for, but that’s what I meant when I said that most art comes from a spirit of revenge; sometimes love, but mostly revenge.

JL: Perhaps you’re not just documenting the aftermath of war, but recording atrocities in the public memory?

BM: There is an archival and forensic nature to this work. Justice failed the Jews in Europe and every text I’ve read emphasises that their story be told in the future. And who does the telling? Artists. When asked why Ireland had so many writers, Becket said: “when you are in the last ditch, there’s nothing left to do but sing.” The only thing left is to ensure that the story is told. I see myself as a storyteller, as a contemporary history painter. The logic of the work rests in the telling of these stories.

Brian Maguire lives and works in Dublin and Paris. His exhibition, ‘War Changes its Address: The Aleppo Paintings’, continues at IMMA until 6 May. Accompanying seminars will take place on 1 March and 27 April. exploring the role of photojournalism and activism in regions of conflict.