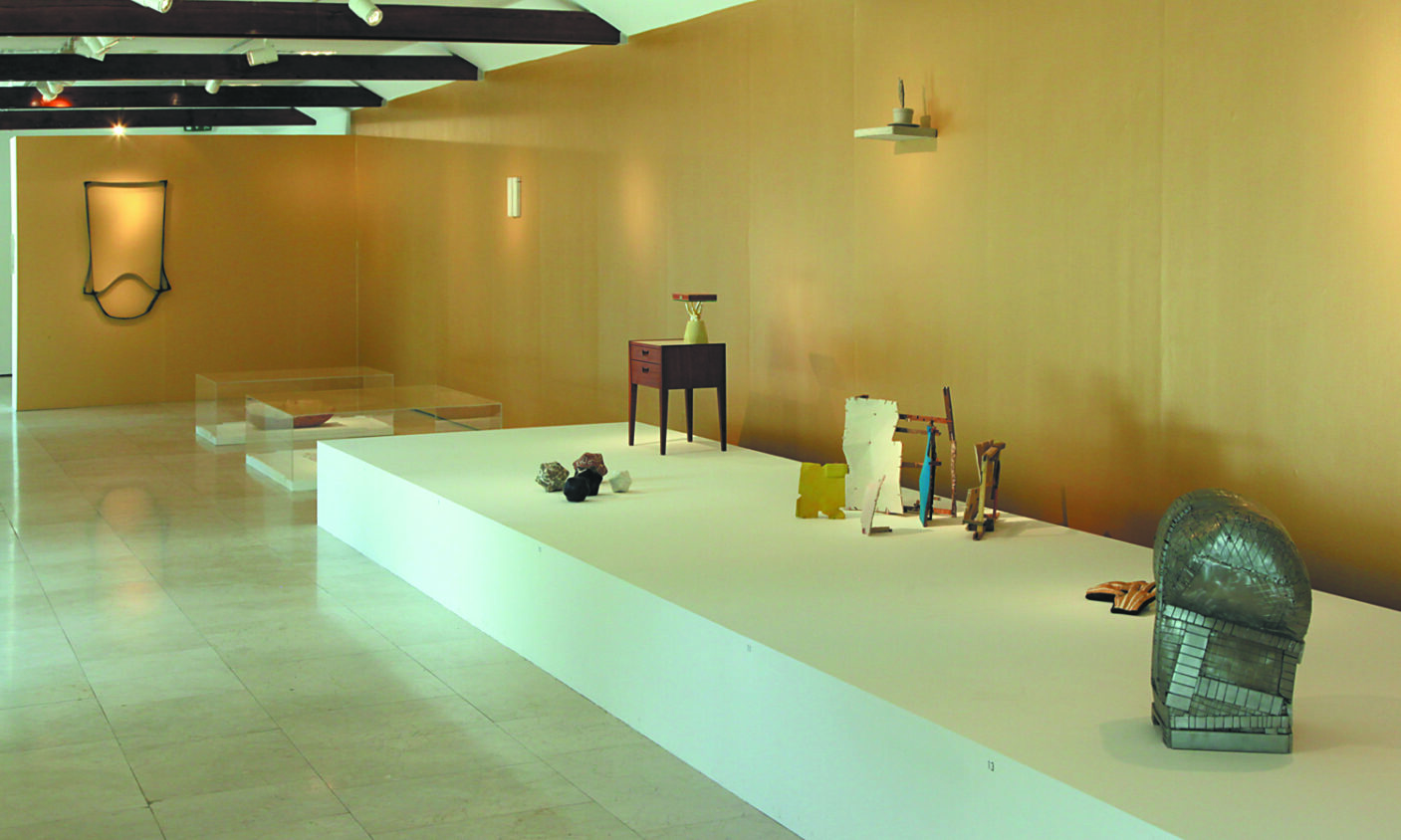 The layout is carefully orchestrated, Mullarney states in her introduction to the exhibition, to guide the viewer through this central premise “that the material chosen is imperative to the final reading of the work”. She continues: “The simplicity and directness of choice means there is no need of further explanation, one can understand through the eyes just how the artist has imparted everything that needs to be said through the use and choice of material”.

You first enter a compact room with two small contemplative works: a small, delicate piece in resin by Paul Mosse and Charles Tyrrell’s found boulder with the word “Here” carved into to it. The next room is a parade of sculptural ideas and making strategies, presented in a way that utilises the long narrow shape of the gallery. The effect is akin to a cast court, where objects created at different times and in different places find common cause and come together to create something new while still retaining their individual resonance.

The wall of the main area of the gallery is painted gold. Metallic walls have been in vogue since Warhol’s factory, but rather than allude to the future it seems that the metallic colour here relates to the past, more Duccio than Billy Name. The gold speaks of preciousness, and of things being alchemically altered by the sculptor’s intervention. The idea that objects, albeit sometimes those made from very unpromising materials, can be imbued with life and poetry by the sculptor’s intervention seems fundamental to the exhibition.

‘Two Birds/One Stone’ is a paean to the physical act of making – to reduction, addition, manipulation and adaptation. The use of found elements, often situated alongside more conventional art materials, is a theme that runs through the show. The interventions in the found range from the ostensibly straightforward, such as Michael Warren’s chopped and charred piece of oak, Trefoil (2013),  to the complex and laborious, such as the fragile interlocking structures created by Helen O’Leary to support The Shelf Life of Facts (2015).

Manipulating the powerful associations of found materials is a theme that runs through many of the works in the show. Rachel Parry’s Water Gloves – clothes for transformation, exquisitely rendered fish skin gloves with webbed fingers, and Alice Maher’s Medea’s Gloves (1998), silk gloves adorned with flowing tassels of human hair, seem to allude to ideas of enchantment or magical transformation.

Kathy Prendergast’s Grave Blanket (1997), a woollen blanket combined with marble chippings, and Dorothy Cross’s Bedding (1993), which comprises a cow udder, a pillow and blankets, are works that use the symbolic power and cultural associations of found materials to provoke a sense of unease. They both use materials associated with comfort and put them with objects which are discomforting in a way that invites the viewer to meditate on corporeality.

Interestingly it is a video work that most clearly asserts the show’s central theme. Adrian Paci’s The Column (2013) features a block of marble being prepared at a quarry in China and then transported to Europe. En route it is carved into a Corinthian column. We watch in awe as a team of masons form the stone. The skill with which they approach their work and their knowledge of the physical characteristics of the material is mesmerising. The work resonates with several others in the exhibition, evoking images of other artists and their relationships with materials, about ancient processes such as stone carving, and more recent processes such as welding or assemblage. The video made me notice the way that sculptures as diverse in style as those by David Quinn, Helen O’Leary and John Gibbons all bore notches, indentations and marks, also indicating the process of creation.

The show’s emphasis on deliberate, meticulous and intensive process does not mean that it’s devoid of humour. For instance Linda Quinlan’s subversive work, It Adds to the Confusion (2006), a conflation of the sort of objects that would have been very at home in a post-war suburban living room, has none of the organic textures of other works in the show, but it shares the seriousness of purpose Mullarney alludes to in her curatorial choices and in her foreword to the catalogue. This catalogue by Jurga Rakauskaite is worthy of mention. It is a small but meticulously designed hardback book with an exposed spine and a blind embossed gold stone shape on the cover. Created in the manner of an artist’s book in an edition of 500, it reflects Mullarney’s curatorial premise of a profound engagement with materials and making.

Andy Parsons is an artist and curator based in Sligo. He is the co-founder of Floating World Artists’ Books.