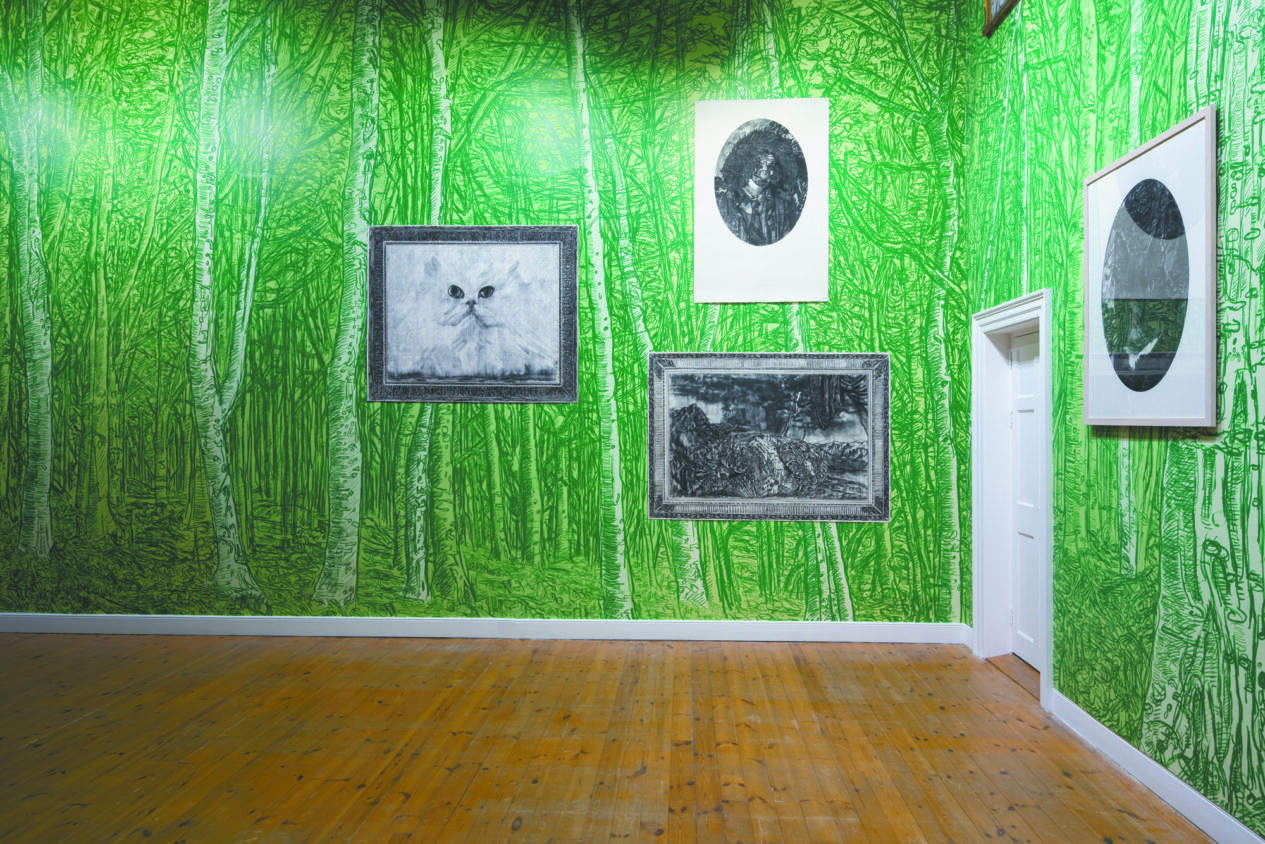 ‘Now Came Still Evening On’ is a unique exhibition presenting the work of father and son John and Gary Coyle. John’s intimate paintings occupy The Dock’s light and airy Gallery One while Gary has created a vast immersive installation in the largest of The Dock’s three galleries.

John Coyle’s paintings and drawings depict scenes and people close to his studio and home. The works have a conciseness and authority clearly developed over a long career. They are reminiscent of the intimiste paintings of Vuillard and Bonnard, and of works by their more northerly descendants in Dublin and London.

The paintings are rooted in empirical study, in the act of looking closely and analysing the world close at hand. They seem to flow from a desire to understand and to convey the poetry of the everyday. Although the visual language can be traced back to Post-Impressionism, these works are completely contemporary, presenting an unfiltered response to the world as it is right now. The sympathetic hanging of the works helps further convey their sense of contemporaneity. In Old Boat Dun Laoghaire (2014) the taut construction of interlocking planes edges towards abstraction. At the point when the painting might become an abstract configuration, Coyle brings the viewer back to an awareness of the motif. This friction between the object depicted and the formal language deployed to represent it is evident in Flowers Still Life (2015), where the welter of brush marks threatens to dissipate the image. Here, again, Coyle brings the viewer back from a tipping point with just enough information about the vase and flowers.

The to and fro between representation and abstraction is a result of looking really hard and bringing to each picture an awareness of the endless possibilities of the language of painting. In Now Come Still Evening On (Clarinda Park) (2014) Coyle has captured the fading evening light in a painting that is close to dissolving in front us. In choosing a title from Milton, he has asserted his faith in finding the potential for greatness in the everyday.

A sense of magic in the everyday is a theme that also runs through Gary Coyle’s work, as does a profound engagement with art from the past. His installation is situated in a darkened room where the viewer is dazzled by the installation’s sheer scale and intensity of colour. The gallery has been papered floor to ceiling in a bright green vinyl drawing of a forest. The woodland scene acts as wallpaper, rather like the elegant flock papers in eighteenth-century salons. On top of it there are charcoal drawings displayed in a salon-style hang, complete with their own meticulously drawn baroque frames.

The forest depicted in The Dark Woods (2016) is Coole Park, a key site in the Irish literary revival where W.B. Yeats went looking for fairies with Lady Gregory. The woodland setting is a continuation of a theme first explored in Coyle’s 2015 RHA exhibition ‘Into the Woods’, which depicted the forest in Montana that was home to the environmental terrorist known as the Unabomber. The woodland scene in ‘The Dark Woods’ is an environment where anything can happen, a place that is real and also surreal.

The imagery in the charcoal drawings, of cats and chickens and clowns, is derived from the internet. Coyle lovingly re-works these ubiquitous images, which are consumed in their millions all around the world. The images are drawn on heavyweight paper in a process involving great care. They are revised, erased and redrawn until they are right.

The drawings in tandem with the wallpaper reflect on our problematic relationship with nature. The choice of cats is apt, as they are both familiar and unfathomable creatures. They represent our unease with nature and the uncanny within the familiar. Nature in Coyle’s work is like one of the thoroughbred cats in his drawings: having been manipulated by man, their future actions are unclear and possibly not benign.

A significant aspect of the work is the presence of kitsch. In Venus (2015 – 2016) Coyle depicts an oven-ready chicken against a background derived from Titian’s Venus and Cupid with an Organist (1548 – 1549). Coyle explores kitsch in art history and contemporary popular culture, as well as on the internet. Of the artists Coyle quotes or alludes to, Titian is often seen as beyond reproach. Others, such as Watteau, are frequently viewed as populist or superficial. Coyle presents a subtle examination of the workings of taste over time and our shifting relationships with images.

There is something subversive about the artist’s deployment of such overt levels of skill and even more so in the evident pleasure he takes in process. The works play with ideas of scale. Subjects that are immediate and close at hand, like the domestic animals, provide a counterpoint to the expansive woodland backdrops. One is also reminded of the vastness of the internet. From this superabundance of images and stimuli, Coyle creates a spectacle and at the same time presents multi-layered and contemplative objects. His work is so infused with irony that it is not ironic at all. The effect is the opposite of the ironic pall that surrounds so much contemporary work made in traditional media. In choosing to explore popular culture and the history of art simultaneously, Coyle presents the viewer with a visual feast.

Andy Parsons is an artist based in Sligo. He is the founder of Floating World Artists’ Books.