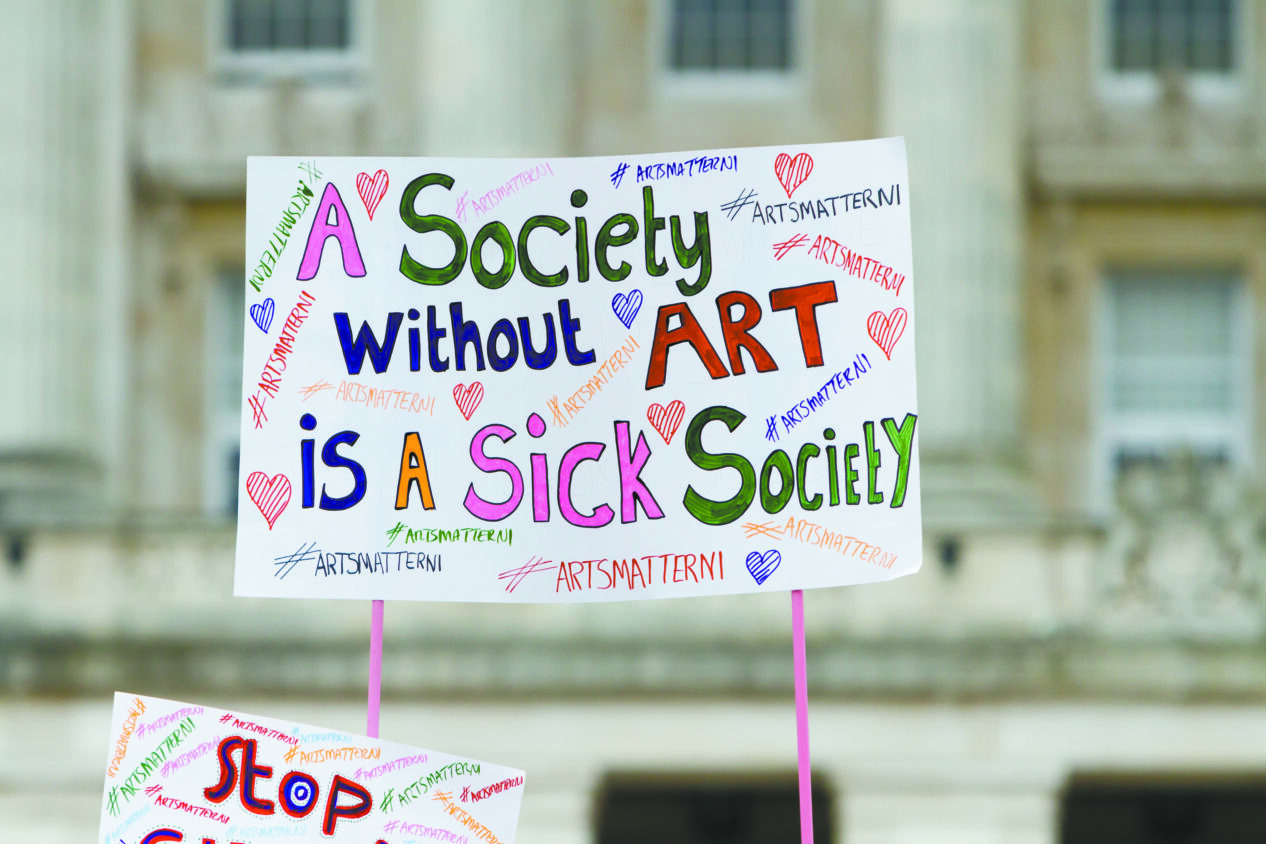 In October last year 32 arts organisations in Northern Ireland received word that they would each receive an in-year cut of 7% to their budget. Given that the core costs of an organisation are mostly fixed, and that much of the budget had been spent in the first half of the year, many of the organisations were looking at a cut of almost 20% to their ability to deliver their artistic programme during the second half of their financial year.

This in-year cut was on top of ongoing cuts made over the past five years. The Arts Council of Northern Ireland (ACNI) are currently only distributing just over two thirds of the public money they had in 2011/12. ACNI also distribute funds from the National Lottery each year.

In November over 300 artists, musicians, writers and actors marched on Stormont to protest. The culture minister, Carál Ní Chuilín, later met with some of those protesting to listen to their very real concerns about an arts sector under threat. The in-year cuts were shortly overturned and the sector felt a mild sense of relief, but deep down remain very worried about the future.

A March 2016 statement has said that the new department will “also take over DEL’s Employment Service and DOE’s responsibilities for Local Government and Built Heritage. In addition, this Department will assume a range of OFMDFM delivery and operational functions in relation to the Social Investment Fund, racial equality, United Communities and Good Relations, disability and poverty, gender and sexual orientation, and North West sites and strategy”.

Many within the sector are worried that the arts will become just a footnote within the remit of this mega-department, which no longer includes the words ‘art’ or ‘culture’ in its title. Not only will the arts have to compete with the traditional party political powerhouses of sports and language within ‘culture’ (as has been the case within DCAL) but now also with social development as a whole. However, some see this time of change as an opportunity to stake a place for the arts at the heart of government.

Earlier this year individuals and organisations were asked to provide feedback on the DCAL draft Strategy for Culture & Arts 2016 – 2016 for Northern Ireland. The sector responded with a massive effort that saw over 2000 responses submitted to the consultation.

Responses from lobbying group ArtsMatterNI, the Ministerial Arts Advisory Forum (MAAF) and ACNI acknowledged that, while the arts can play a big role in tackling poverty, economic development and tourism generation, these must not be the only drivers of government policy. The arts must be allowed to exist, thrive and excel for their own sake if they are to have any impact on other governmental priorities.

Over the last year, Belfast City Council (BCC) have also been working on a new Cultural Framework for Belfast and an Action Plan: 2016 – 2020. There has been extensive consultation with the sector during the development of the draft and earlier this year there was a final opportunity for organisations and individuals to submit a written response before the draft is presented to council.

There is much to admire in the draft document: it endorses skills development, it shows international ambition, it recognises the value of the arts and it demonstrates innovation in its actions and targets.

One area in which both draft policy documents fall short, however, is in explicit support for the individual artist. The ACNI response to the DCAL consultation stated as its number one key point that “support for artists must be at the heart of an arts strategy”.

Our own research in 2016 into artists’ earnings and living conditions highlighted the fact that most artists do not earn a living wage from their professional practice. There is a critical need for local and national government policy to create a climate where having a sustainable career as an artist is not just desirable, but is crucial to delivering strategic goals.

The BCC draft action plan included a general target to support 300 full time jobs by 2020 as well as a separate action point to support 8,000 artists’ contracts per year. It seems evident that there is still some disconnect in understanding that providing more paid contract opportunities will help artists sustain a full time career through their practice.

The Rosie James Memorial Award is administered by ACNI and awarded to one artist or maker each year who demonstrates excellence and has materials at the heart of their practice. This award of £15,000 allows the artist to make a new body of work that would otherwise not be possible.

There are awards available for artists at all stages of their career and we encourage individuals to speak to arts officers at ACNI to discuss applications in advance of submission. VAI also provide support and guidance in developing applications.

Other support for individual artists includes the Paul Hamlyn Foundation under the objective of “nurturing ideas and people”. This includes the new Ideas and Pioneers fund for artists whose projects deliver social change. The Elephant Trust provides grants of up to £2000 for artists wishing to develop ‘imaginative’ new work, and the Fenton Arts Trust provides grants for early-career artists.

Footnote. All of the documents referenced in this column are available publicly online, however, if you would like to receive copies of any of the documents by email, please contact Rob@visualartists-ni.org.