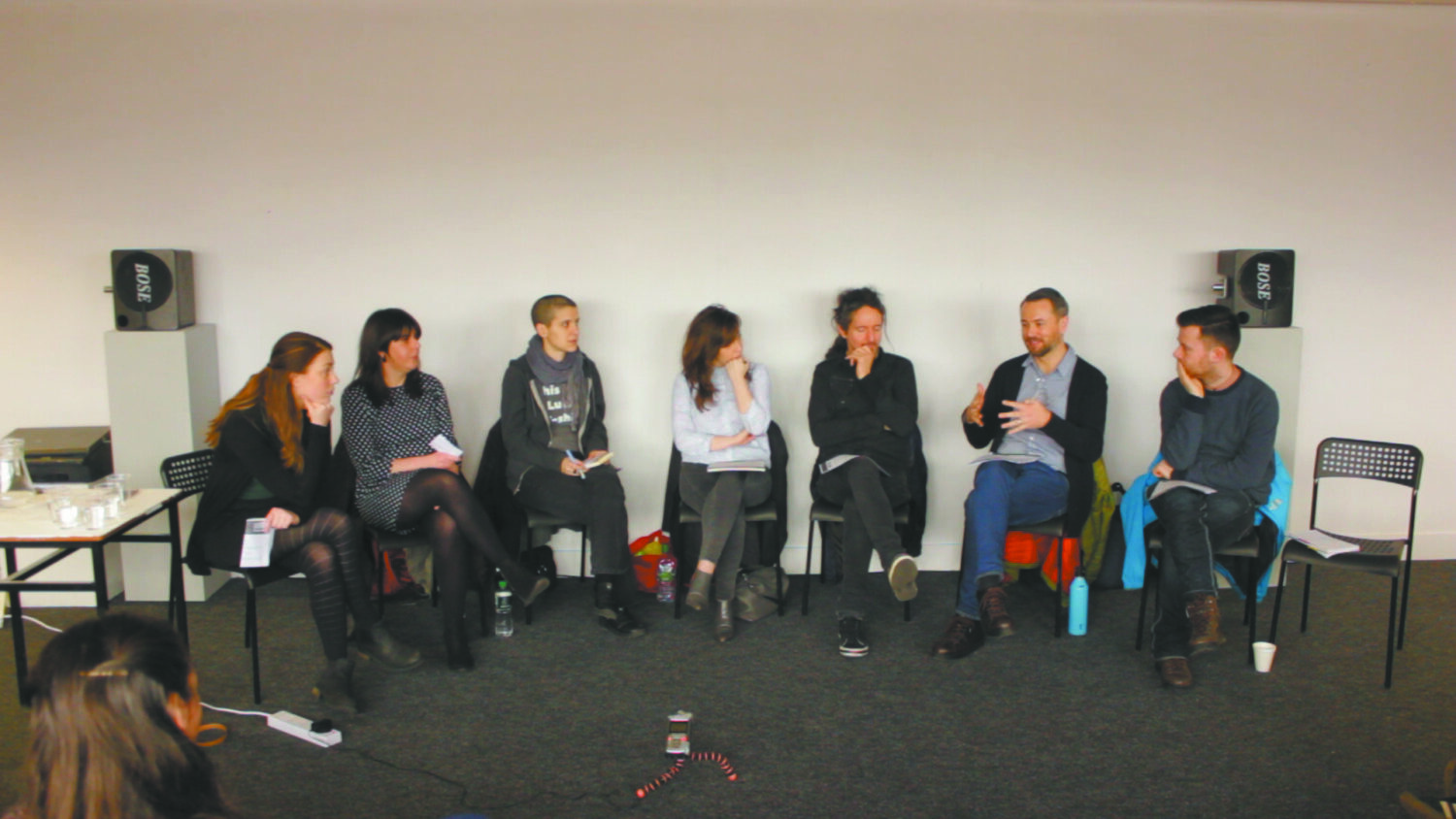 CHRIS HAYES, CO-DIRECTOR OF ORMSTON HOUSE, LIMERICK, DISCUSSES THE TRIALS AND TRIBULATIONS OF ARTIST-LED PRACTICE AS AN INSIDER.

Sample-Studios is an artist-run space in Cork. To celebrate its fifth birthday Artistic Director, Aideen Quirke, organised a three-day festival of events. As part of the festivities a panel discussion titled ‘Artist-Led Island’ tackled the topic of artist-led spaces in Ireland. The panel included Moran Been-Noon from Platform Arts Belfast, Lisa Crowne from A4 Sounds in Dublin, David Dobz O’Brien from the National Sculpture Factory in Cork, Gavin Murphy from Pallas Projects in Dublin, Shelly McDonnell, Communications and Advocacy Assistant at VAI, and myself, representing Ormston House in Limerick.

It was particularly poignant to have the panel discussion held in Sample-Studios, as the building is set to be demolished and a hotel built on the site. Beautiful and spacious as Sample-Studios is, their tenancy was always offered on temporary basis. The history behind their situation is quite specific, yet it’s a story that resonates with artist-led organisations across the country. The reality of and compromise inherent to insecure tenancy leaves many of us simply waiting to be replaced by a commercial operation.

While it’s important for these conversations to acknowledge the problems – the lack of funding, the precarity of space and labour, and the seeming inevitability of burnout – these aspects of the conversation tend to dominate at discussions about artist-led spaces. To paraphrase audience responses I’ve heard throughout the years, it often feels as if we meet simply to remind each other that nothing has changed since the last conversation. The artist-led conversation has, in some ways, been exhausted, ironically reflecting the burnout experienced by the army of volunteers, CE and JobBridge workers who keep the system ticking by.

Discussions about the economics behind artist-led spaces prevail at the events and this is no surprise. In recent years artist-led spaces have been heavily contextualised within the fallout of the recession. So much so that the discussion can feel stifled by cliché. Of course it’s not necessarily inaccurate to situate artist-led practices within the economic trajectory of the last eight years. The economic cycles – boom to bust – mirror the waves of energy behind each artist-led space, with each group of people only able to give so much to a project, as they’re often volunteering to execute their ideas on a shoestring budget.

It’s a story we’ve heard before. Yet, if the best time for artists to get access to buildings is when commercial enterprise is lagging, the crucial question that follows is what role can artist-led practices expect, seek, and demand once the hotels, shops and cafes come back. What is at stake is not simply access to buildings, but the life and legacy of artist-led initiatives.

When interviewing people about the motivations and desires that fuel the artist-led movement in Ireland, one of the strongest common links was what artist-led organisations lack. The hows – funding streams, administrative burdens, logistical problems – seem inevitably to loom over the whys. Of course, there is no point in simply being a poorly funded version of a larger institution, so it is in those moments of defying the lack of expectations, resisting the pressure to follow convention and straying from the familiar, beaten track of the established art scene that artist-led organisations have typically laid their case.

Grappling with the impending loss of the building in which the discussion took place, Aideen Quirke chose not to focus on the negatives, stressing that there was a need for the organisation to become more resilient and prepare for the transition. Sustainability is key, of course, to continuing the support that Sample provides to artists. Elaborating on this, Quirke said: “Artists are staying in Cork because of what’s going on here, and I stayed in Cork because of Sample-Studios. Sample-Studios means that people can stay in an affordable workspace; we purposely price the spaces so that somebody on social welfare could afford it.”

Artist-led organisations are often defined by the role they play as a ‘resource’ to the wider cultural ecosystem. The resources that artist-led organisations offer, not just the art community but the wider community, is less easy to quantify and therefore often overlooked, undervalued and seen as a luxury rather than something necessary for a meaningful quality of life.

Just as artist-led organisations are a resource to artists and the wider public, they can play the same role for the volunary participants of these organisations. The first, more limited, understanding of this is the kind of experience necessary for any career and familiar to every industry: to learn new skills, gain a better awareness of the sector and and to network. The second speaks to levels of involvement, of meaningful engagement with the wider decision making and vision for an organisation. Often artist-led organisations are so small that staff members must take on much more meaningful roles than they would in a larger organisation. Lucy Elvis, who sits on the board of directors of 126, Galway, explained that democracy was at the heart of their organisation’s structure. It’s perhaps the most concrete example of how the practical everyday realities of an organisation feed into it’s creative vision and vice versa. She stated that to “make decisions based on either a majority vote or a consensus prevents one person’s creative vision prevailing… [therefore] keeping the organisation fresh and risk-taking”.

Thus far I’ve primarily spoken about the recent history of artist-led spaces and the impact of day-to-day realities for the broader debate. Despite having its own character and specificity, the situation with artist-led organisations is by no means unique. There’s a long history of these initiatives, both at home and abroad.

Coinciding with their twentieth anniversary, Pallas Project/Studios has scheduled to launch a book titled Artist-Run Europe – Practice/Projects/Spaces. The book features a thorough list of artist-run spaces in Europe, and a selection of critical texts reflecting on artist-led practice. While timed to coincide with their anniversary, the book sets its sights beyond just one organisation, looking across Europe to address the lack of writing, both critical and historical, on artist-led practices. The ambitions of the project are to address the lack of writing on artist-run spaces, and recognise the value of artist-led practice. As Co-Director Gavin Murphy said, “culture doesn’t just appear fully formed in a museum. It grows from the grassroots up.”

When I spoke with my fellow Co-Director of Ormston House, Mary Conlon, about how the present context of artist-led organisations in Ireland feeds into our programming, our discussion quickly turned to how our four-year history – we turn five on the 11 August – is shaping the perceptions and expectations of the organisation.

Conlon remarked: “We had realised last year that there was a shift in how people perceived us, that we weren’t just an artist-led, temporary space. People saw us as something more established, more permanent.” This is all despite Ormston House not having secure tenancy or regular funding, and being run on a volunteer basis. Yet, she added: “I think some people do see us as an institution and maybe ‘institution’ isn’t such a negative word. Why can’t an institution be experimental, be radical and change perspectives?”

While we have serious ambitions to secure to tenancy of the building, in an attempt to grow lasting roots, our conversation ended with Conlon’s reflection on the early days of Ormston House. “What I would say to people who are thinking of starting something today, whether it’s opening a space or developing a project or idea, is to build in a sustainability plan from the onset. And by sustainability I don’t just mean the physical infrastructure, I mean the health and well-being of the staff, of the participants, of the relationships of the people who are around you.” She added: “We’re not there to satisfy the architecture; Ormston House is the team”.