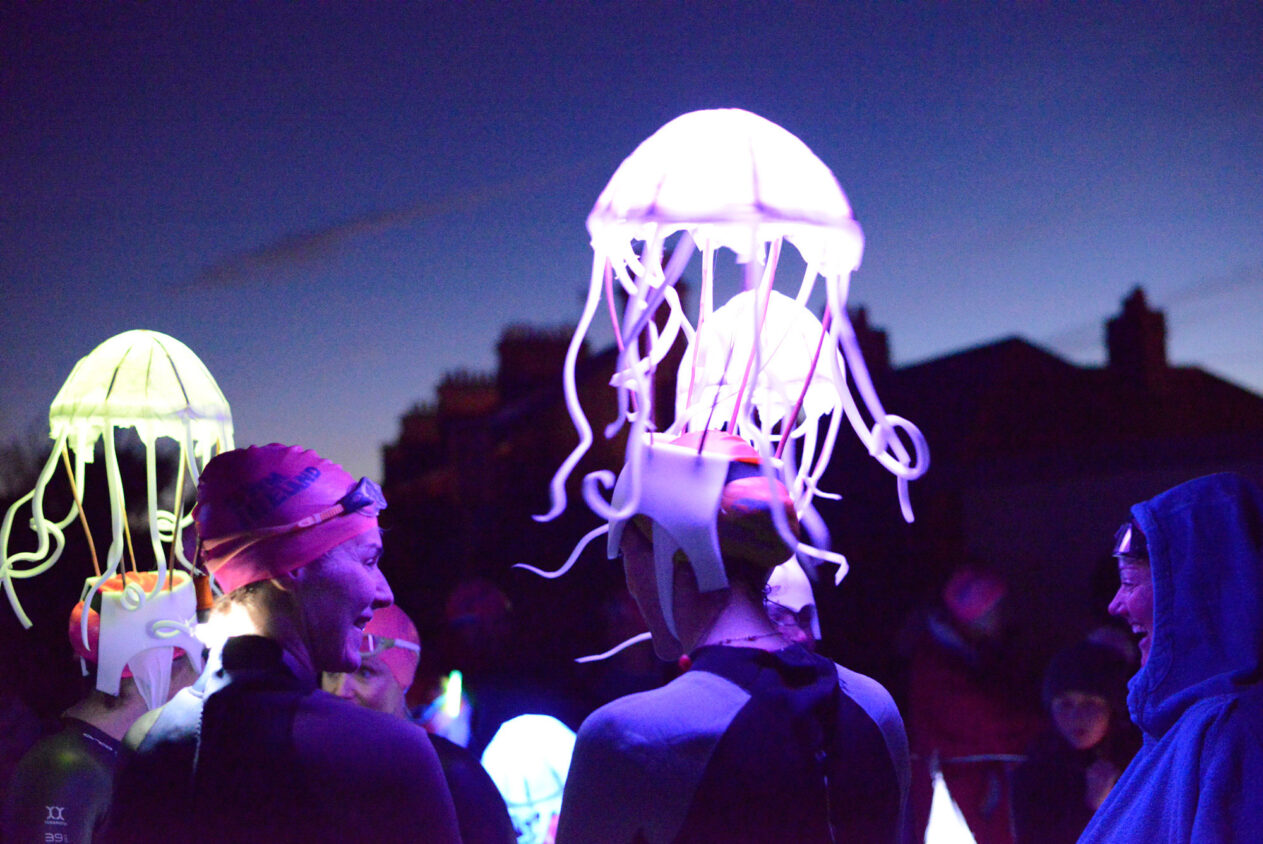 I lie on my back and float in the dark water; around me swimmers tread water and bob. In the distance, I can see a long procession of people carrying an array of lanterns and sea creatures; they walk past a large blue wall where a black horse is rearing up, afraid to go into the boat and be taken off the island. The sea creatures beckon.

‘Beyond Islands’ was a participatory nighttime event that took place in Skerries, County Dublin, on 21 October 2019. It was the culminating event in a series of swims I have undertaken over the past few years, to and around Lambay Island, as part of an expanded art project.1 My art practice explores ‘place’ through swimming – place being the watery spaces that are navigated and swam through, the littoral space surrounding, and the social space created by this shared activity. Swimming, journey, encounter and conversation are the starting points for my projects. I’ve been describing my process as ‘Psychoswimography’ – a watery drifting and reimagining of place.

‘Beyond Islands’ took people on a journey, with participants choosing whether to travel by land (walking) or by water (swimming). Along the way, the audience encountered performances and readings of commissioned and archival texts, video and animation projections, illuminated floating sculptures and a large shadow wall. The event started across the bay on the South Strand as the sun went down. After an introduction by the narrator, Rosaleen Ní Shúilleabháin, the swimmers and walkers parted ways, with Rosaleen guiding the walkers. The swimmers followed a smack of illuminated, flashing jellyfish towards the sea, where they encountered a performance by synchronised swimmer, Aoife Drumm.

Meanwhile, the walkers met Ian Fleming, disguised in a mound of seaweed, who read ‘King Fish’, adapted from Natural History of Lambay, written by Robert Francis Scharff, who was part of the Praeger expedition that spent a summer researching the flora and fauna of Lambay in 1907. Scharff’s text describes how the King Fish was found on the shores of Lambay, and how this rare and beautiful fish can still be seen in Dublin’s Natural History Museum, although it has lost its silvery hue, now more a brownish-yellow colour of old varnish.2 Dominic Gilmore read this same text to the swimmers from the Currach ni Sceirí, lit by a beautiful King Fish lantern, made by Carol Martin from Skerries. Later on, after the walkers had passed the large shadow wall, Emer McLoughlin read a text written by myself, while the swimmers could be seen passing by. The final destination for both the walkers and swimmers was The Springers Bathing Area, a natural auditorium. At the Springers, 50 metres out in a boat on the water, Landless (a group specialising in unaccompanied four-part harmonies) sang The Ramparts Against Uncharity, a ‘siren shanty’ written by Landless member Ruth Clinton especially for the project.2 Landless sang as the ‘voice of Lambay’ who, like a siren, calls the listener to turn away from the signs of ecological collapse; the song warns of the perils of doing so. The swimmers listened while floating in the water, and the walkers listened from the shore.

My art projects start with a swim in the particular body of water I’m interested in. This embodied form of artistic research allows a sense of acceptance. Before submerging, I talk to local swimmers about the best to place to enter and exit and what the tides are like. I see swimming as a social activity and the swimmers are a crucial part of my projects. Springers is situated on Red Island, a tombolo that used to get cut off by the high tide, before it was developed, and a road built as part of Skerries town. Lambay can be seen from the Springers. The main attraction to the Springers was the Skerries Frosties, a group of local sea swimmers who meet daily at this site for swimming all year round. I’ve been swimming with the Frosties for many years and love their energy, camaraderie and booming laughter.

During the making of ‘Beyond Islands’, the longer I spent in Skerries, the more the project gathered momentum, fuelled by enthusiasm and support from the community. The project couldn’t have happened without all this good will. In particular ‘Teddy’s Shed’ – a large garage behind Teddy and Aisling’s house – was generously made available for the fabrication and storage of sculptures and lanterns. I facilitated lantern-making workshops with the Skerries Foróige, Prosper Fingal and in Skerries Mills.

For most of my art projects, I’m the sole organiser, administrator and producer. ‘Beyond Islands’ was the most ambitious project I’ve undertaken to date, and it was a massive learning curve, trying to navigate the red tape, logistics, permissions and safety procedures for events in the public realm – made even more complex by having the swim after dark, and with musicians out on the water. I worked with Swim Ireland on safety and insurance for the night swim. As a member of CREATE, I have artist’s insurance with JLT Ireland, which covers public liability, costing approximately €250 per year. I had to get permission from Fingal County Council for a public event and conducted a risk assessment. A problem arose when the company I had arranged to supply the pontoons told me (late in the day) that no one was actually insured to be on them. I was then faced (two weeks before the event) with trying to find someone to insure the grey area between land and water. After many emails and phone calls, thankfully JLT added this requirement to my policy.

‘Beyond Islands’ was scheduled to take place on 7 October 2019, but Hurricane Lorenzo had different ideas, so I had to change the date to 21 October to get a similar tide time and height. However, on the night, the weather was perfect. The Skerries Sea Scouts gave us kayak safety cover, Carol Finlay and Kinny from Swim Ireland kept the night swim safe. ILDSA lent us tow floats, and there were little last-minute miracles on the day, like Geraldine’s horse box that turned up unannounced, to help move all the sculptures. Over 100 people of all ages took part, with some travelling from as far as Belfast. I enjoy the chance encounters that working in the public realm allows, such as the people out running or walking their dogs who come across an art event unexpectedly.

Vanessa Daws is an artist based in Dublin. ‘Beyond Islands’ was funded by the Arts Council of Ireland. Her next swim project will explore the English Channel, following her own Channel swim attempt in 2019. The project will involve a series of live events and a touring exhibition.

Notes
1 I have been swimming at Low Rock, Malahide, every week since moving to Dublin in 2011. Eight kilometres out from Low Rock, is the privately-owned Lambay Island and, for a swimmer, an island is a lure. I started a series of swims as a way to explore and research the island. The first swim was in 2014, as part of the CREATE Artist in the Community scheme. The sea swimming community from Low Rock swam relay-style until we reached the beach in Lambay harbour, where we swam the last 500 metres together. The second swim was during a residency at UCD in 2015. I swam a solo swim from Low Rock to Lambay, inviting members of the scientific and artistic communities to act as my support crew and to respond to the swim as they would in their professional practices. The third swim was a circumnavigational swim in 2016, when I became the first known person to swim the 8.2 km around Lambay.
2 Robert Francis Scharff, Natural History of Lambay, 1907.
3 ‘Ramparts Against Uncharity’ was the nickname given by architect Edwin Lutyens to the circular wall he built surrounding the castle and woods on Lambay Island.