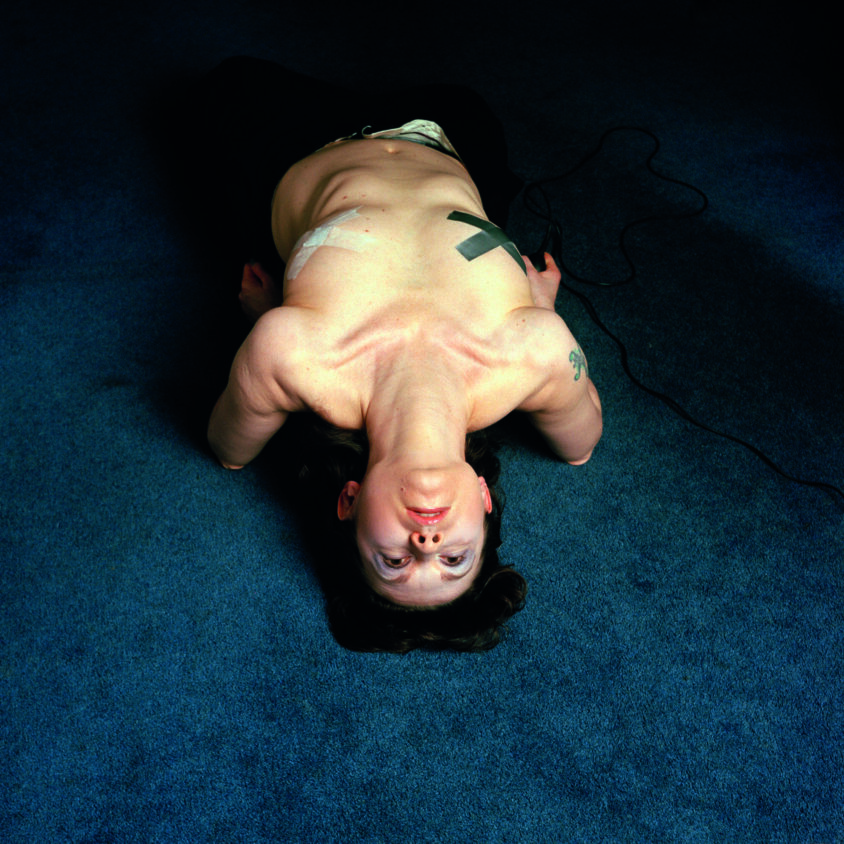 Exhibited online by Cultúrlann McAdam Ó Fiaich – an Irish language, arts and cultural centre on the Falls Road in Belfast – Vera Ryklova’s ‘Aesthetic Distance’ re-presented a photographic series made in 2015. Thirteen minutes long, the artist’s montage had three evenly spaced segments that guided viewers through a choreographed experience of the work. In the first, the images were revealed in fragments, a roving lens traversing their surfaces; in the second they featured in their entirety, while, in the third, they were shown in relational groupings of twos, threes and fours.

The genre is self-portraiture, coupled with role-play, through which Ryklova deploys herself, her experiences and her body to probe themes relating to gender and identity. In addressing notions of how the self is perceived internally and constructed by social means, she is interested in the emotional conflict that arises from negotiating the gap between society’s expectations and reality.

Previously shown in an in-person exhibition at the Triskel Arts Centre, Cork (2018-19), the images were taken at the artist’s Dublin home using a fully manual, twin-lens reflex camera, on medium-format film, the negatives scanned for inkjet printing. At the time, she revealed, she was dealing with feelings of longing and fear of ageing. These are not conveyed literally, but in a performative manner that leverages ambiguity.

Having made the decision to view the online showing, our role is rendered passive, the act of looking shaped by Ryklova’s curation, and the fact that we are in our own private spaces rather than a shared public setting. It quickly becomes clear that, in adding a layer of animation to still images, her approach is direct and unapologetic, which provokes a heightened viewer engagement.

The sequence of fragments opens on a black-and-white image, the camera panning over pale fabric on a dark background. It pauses perceptibly to track slightly downwards – emphasising the location – before moving steadily up to reveal the artist’s face. Appearing dishevelled, she looks directly at you. This matters when it transpires that the ‘emphasised’ section focuses on her crotch, clothed in underwear and dark tights. She is watching you looking, and you are caught in the (albeit unintended) act. Slips of white can be discerned either side of her panty line, hinting of menstruation.

The tone now set is revisited in the second, colour image, which opens on a head-and-shoulders crop. Hair up, untidily, Ryklova stares at the viewer sideways-on. Caught in this gaze, your eyes are drawn deliberately downward in a movement that alights, once again, on her groin. Clothed in pinstripe suit trousers, of a type traditionally worn by men, her splayed legs and open-neck shirt gesturally conflate defiance and seduction.

Here, as in many of the photographs, a camera trigger lead features in the mise-en-scène, pinned down by a booted foot as it traverses the floor. Its inclusion recalls a stark image from 1992 of the terminally ill photographer Jo Spence, whom Ryklova admires.1 More suggestive of fetish in some than others, the extent to which the wires feature is calibrated from image to image, speaking not just of their maker’s control, but also of their contrivance. In the third image, they form a triangle around the artist, a pair of triggers held aloft above her head. The camera tilts down from its pinnacle along one wire’s length, before panning left to a third crotch shot. The unexpected sight of boxer briefs emblazoned with a Superman logo lightens the intensity of the moment, relief quickly extinguished as eyes are led back up to be captured in Ryklova’s unrelenting glare.

Having been lulled into certain expectations by common features of the first three images, the content now diversifies: the artist wearing a silver space suit and sloppy red lipstick; or kneeling on the floor, head thrust back. In one monochrome photograph she disappears within an oversized jumper, its upright polo-neck covering her face. Commenting on public-private tensions and the problematics of ‘the gaze’, while also recalling the bizarre Victorian ‘hidden mothers’ trope,2 it contrasts sharply with three mildly humorous images shot in front of a shimmering gold curtain.

This segment ends with a resounding return to the artist’s pubic region, a part of the body with deep connections to identity, desire and expectation. Her strapped-down breasts intimate gender fluidity or suppression, her underwear padded to emulate a bulging phallus. Although still mostly covered, it is a more exposing image than previously seen, one that communicates a mode of honest questioning from one human to another.

The full-size and grouped photographs confirm the nuanced staging intuited from the fragments, which exploits the connotations invoked by many of their elements – from the blue ‘office’ carpet, lone picture hook and dated wallpaper, to various items of clothing and props. Interpretations will undoubtedly be varied, but it would be hard not to be emotionally and mentally stirred by this body of work.

Resolving the paradox that arises from many of the photographs being so bravely intimate, it transpires that the title ‘Aesthetic Distance’ refers to the interface provided by the lens. It was drawn from Thomas J. Sheff’s theory of catharsis as a process of emotional release. He wrote: “At optimal or aesthetic distance, one is simultaneously and equally a participant and an observer. The patient has a double vision; at this point, repression is lifted, and the emotion can be managed. Catharsis may occur.”3 In constructing these images, Ryklova has used her medium to achieve distance from her distress, liberating while processing her emotions. Working spontaneously and intuitively, the experience was, she has stated, “truly cathartic.”4

Susan Campbell is a visual arts writer and researcher.

1Interview with Vera Ryklova ‘My practice is about the concept of the self and its social construction’, Futures, futures-photography.com

2To overcome difficulties associated with photographing young children in the early days of photography, when they had to keep still for long periods, mothers covered themselves by various means so as to provide support while remaining effectively invisible.