Marie Brett, Day of the Straws: The Fairytale, video still; courtesy of the artist

MIGUEL AMADO INTERVIEWS THE ARTIST MARIE BRETT ABOUT DAY OF THE STRAWS, A WORK EXPLORING THE EXPERIENCE OF COVID-19 THROUGH CULTURAL LORE.

Miguel Amado: Day of the Straws was created during the lockdown ordered by the Irish government to mitigate the spread of COVID-19, but its origins lie more broadly in your interest in cultural lore. How did the work emerge and evolve?

Marie Brett: The project stems from research on the loss of Irish cultural lore from both the collective consciousness and the practice of everyday life, as advancements in technology make manual ways of doing redundant. I have always been interested in revealing what is socially hidden or shunned. My ambition with Day of the Straws is to reassess the value of such Irish cultural lore within contemporaneity, repositioning it as a critical necessity.

In the context of the COVID-19 pandemic, specifically the contradictions between the governmental and/or medical discourse and public opinion, themes of cultural lore in Ireland appeared with urgency. It seems that the outbreak paved the ground for an open discussion on feelings of fear and corresponding acts of protection. People told me how they were looking after themselves not only using science – for example, washing hands – but also by calling upon deceased ancestral forces, invoking the supernatural through secret acts of sacred ritual.

During the lockdown, I remained curious, focusing on matters associated with the supernatural as well as the politics of care, with mind and body connecting both. I wondered whether their intersection could offer or advance new meaning for hope within such a period of mounting crisis. Multiple topics emerged: science and folk medicine; ritual and repentance; mental health and well-being; fake news and warning factors. Figures such as the oracle and the soothsayer as well as totem animals complemented them. I sought to creatively reimagine these topics and figures with respect to the experience of COVID-19. Consider science and folk medicine: notions that immediately occur to me include invisible threat, bacteria, contagion and vaccination on the one hand, and healing, cure, shamanism and natural remedies on the other. 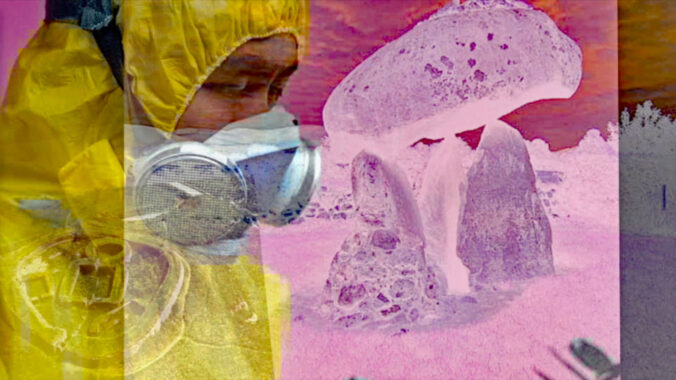 Marie Brett, Day of the Straws: The Spirit, video still; courtesy of the artist

MA: The title of the work refers to the historical Day of the Straws. What connections do you perceive between that nineteenth-century event and the present pandemic?

MB: The Day of the Straws took place in Ireland during the second cholera pandemic, which lasted from 1829 to 1837. Much of what happened then resonates with what is happening now. For example, across Europe, populations were quarantined, and buildings fumigated, while the scientific community varied in its explanation of the causes of the sickness. Some believed it resulted from divine intervention; others thought it was provoked by recent immigrants, particularly the Irish.

In County Cork, the Virgin Mary allegedly appeared in Charleville on Saturday 9 June 1832, leaving ashes at the church, which she warned were the only defence against the disease, and which were to be delivered to four houses, and then another four, and so on, in order to spread that message. By the following Tuesday, the message had reached the borders of Ulster, and three days later it had crossed into Derry. The message changed on its travels: ashes, turf and stones were used in the east, while straws were used farther west. Straw has a rich cultural heritage in Ireland, from day-to-day uses such as bedding and roofing, to symbolism around safety, such as that of the Parshell – a handmade cross believed to protect against evil spirits. The Day of the Straws consolidated the idea that materials, which ‘exist’ in the field of the vernacular, can invoke protective powers through belief in the otherworldly. I felt that tracing the experience of COVID-19 to a phenomenon such as the Day of the Straws nods to Ireland’s traditions of the supernatural, giving audiences a generous entry point to the project that I was planning to develop, and enabling me to expand from the sphere of the rational into more esoteric territories.

MA: How and with whom did you develop the work?

MB: I developed Day of the Straws in dialogue with Kath Gorman from Cork Midsummer Festival, and with creative collaborators Katie Holly, Kate O’Shea and Lucia Pola. Cork Midsummer Festival commissioned the work for BE PART, a Creative Europe-funded programme, and SIRIUS, an arts centre in County Cork, became a project partner. Holly wrote texts that investigated key trends that I had been researching. For example, ‘The Cure’ explores the alternative antidotes to COVID-19 as a countercultural attitude, spanning a universal longing for aid amid a Cork-based psyche. ‘The Fairytale’ addresses myth creation, hypothesising about a mystical contagion.

I work primarily through dialogical approaches and methods, and it is often people who have never worked with me – or any artist – who get involved, turning my practice into a reciprocal exchange. Through the networks of Cork Midsummer Festival, SIRIUS and the team, a huge number of community members – including historians, healers, spiritualists, storytellers, folklorists, druids and artists – elected to participate in Day of the Straws, becoming co-creators. Around 75 individuals took part in interviews with me and Kate over the telephone, WhatsApp and Zoom, emulating face-to-face connections. Kate was crucial in helping me initiate conversations and lead video chats with individuals across Ireland and beyond.

MA: Did the participatory dimension of the process steer the direction of the work?

MB: The depth and breadth of people’s engagement led to materials with vitality and wonderful potential. Through their suggestions, reflections and comments, participants dug deep in gifting authentic, personalised narratives, providing a wide perspective on the experience of the COVID-19 pandemic. Additionally, many participants generated materials, prompted by our conversations. For example, William Moloney, a hand analysis specialist, shared his wisdom and abilities over a video call. He tested my assumptions regarding palm reading, proposing that it has been hijacked by quacks for financial gain when, in fact, it is and has always been about locating well-being.

MA: It seems that you were more a movie director or orchestra conductor than an artist, bringing together multifarious contributions. What did you do with the materials that you gathered?

MB: First I distilled the materials – not only those that we assembled, but also those that were purposefully generated for this occasion. Then I edited the materials to an essence, aligning them in clusters (for example spirituality, soothsaying and conjuring protection; self-care and health; hope, and so on). Finally, I shared the materials with Lucia, who deftly arranged them among shimmering anamorphic gifs using my photographs and video stills. 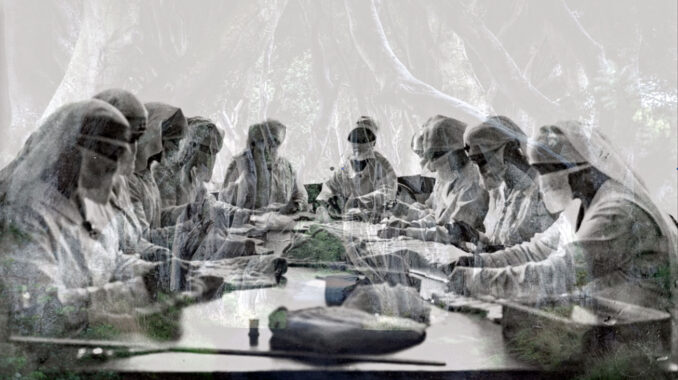 Marie Brett, Day of the Straws: The Ashes, video still; courtesy of the artist

MA: The work is born-digital, taking the form of a website. Can you describe it?

MB: The website comprises eight sections, or ‘rooms’: ‘The Ashes’, ‘The Cure’, ‘The Virus’, ‘The Ritual’, ‘The Spirit’, ‘The Fairytale’, ‘The Separation’ and ‘The List’. Each room features a piece encapsulating the concept summarised in its title. Within five of the rooms are vaults. They are symbolic of what lies under the floorboards – the skeleton in the closet or the treasure trove waiting to be found – and operate as extensions to the thinking underlying those five sections. Both the rooms and the vaults feature myriad audio clips (from music to spoken word), still and moving images, and texts, all collaged and able to be activated. Users make navigational choices between rooms and vaults, followed by multiple options for continuing onwards.

It was important for the work to somewhat mirror the internet – an accumulation of found, fabricated, archival truth and blurred fiction – to expand greatly from a gateway of documentary, towards a more fantastical fiction-reality of shared experiences of COVID-19. In addition, it was important to claim the website as a place of vigour, with potential for a little bemusement from the outset, so that viewers might feel they had landed in an unknown universe and would be lured, almost compelled, to delve deeper through multiple doorways to territories of wonder, where fantasy carnival meets visionary chimera.

MA: Which section could you highlight?

MB: Within ‘The Ritual’ is a video which mixes slow, cross-dissolving close-ups and details of carved animal heads, borrowed from the Cork branch of the Celtic Stickmakers Club, with a recording of a live, electro-acoustic performance of Full Moon Cleansing Bath by Mama Matrix Most Mystical. By utilising double imagery and mirroring, I suggest that the totems mediate between the natural and the supernatural worlds, conveying the notion of a transformative, mystical object, a venerated deity who watches over a clan. The composition utilises bowls, water, flowers and electronics, and is dedicated to the last supermoon of 2020, operating as a call for healing.

MA: What sort of impact, now and in the future, would you like the work to have?

MB: The project reimagines the historic Day of the Straws story within the present, encapsulating the modern-day mythology that charters the indiscernible social fabric of Ireland during COVID-19. I believe that Day of the Straws effectively establishes coordinates to navigate both a country’s very real terrors and the complicated, interrelated matrix of ‘hope and cope’ amid faith, science, the rational and the supernatural, as manifest in ancient and contemporary cultural lore.

Day of the Straws was commissioned by Cork Midsummer Festival with SIRIUS. It was launched online during Midsummer Moments in June 2020 and further public presentations are scheduled for Culture Night (18 September) and Samhain (31 October) at SIRIUS.
dayofthestraws.ie

Miguel Amado is a curator and critic, and Director of SIRIUS.
siriusartscentre.ie

Marie Brett is a visual artist based in County Cork.
mariebrett.ie