Helen O’Donoghue: Bernie, you said that the film, Flight (2020), came together very quickly for you. What was the genesis of the idea?

Bernie Masterson: I had worked in collaboration with the poet, Máighréad Medbh, on my short film, Bold Writing, in 2016. When I came across her prose-poem, Microcosm – from her book of internal dialogues, called Savage Solitude: Reflections of a Reluctant Loner (2014) – I asked her if I could record her reading it. I had this recording here in my studio and was ruminating on it, when I read about the Highlanes Gallery’s call-out to artists for the Janet Mullarney Award. It just felt so right and timely to use it as the starting point for Flight. Máighréad was happy for me to use her poem, so I embarked on this project while in COVID-19 lockdown. I wanted to express what the experience of the restrictions was like for us all, by juxtaposing this with the themes in the poem. In her narrative, she speaks as three personas: ‘One’ is the instinctual emotional self; ‘The Other’ is an aggregate of society-at-large; and ‘I’ is the conscious, reasoning self. Together they constitute a single consciousness.

HO’D: Can you tell me about the metaphor of the bird?

BM: Flight is embedded in the current situation of necessary solitude, working with ideas of movement, the ultimate being flight – a concept that has always fascinated humans. I explore this theme, weaving in the Greek myth of Icarus. I was also strongly influenced by Janet’s video work, Cortociruito (2005), which featured men imitating birdsong. The film shows a group of men and the camera pans from one man to the next as they each perform a specific ‘bird call’ into the air. They are arranged in a circle like a male choir and as one man ends his ‘verse’ another takes it up. It is very lyrical, poignant and peppered with Janet’s rather wry humour.

HO’D: You chose to depict a young male – did you consider focussing on a female figure?

BM: No, I wanted a young man; a pre-pubescent on the cusp of manhood. I worked with Ronan, my neighbour’s son. He liked the poem and engaged with it from the start, and completely understood what I was looking for from him. I worked with him and his parents initially. We rehearsed it by reading through the poem and working off a storyboard that I had prepared. I made the movements and he mirrored them back to me. I filmed it all in one shoot, outdoors in the dark just after sunset. It is artificially lit in the laneway, using a green screen as a backdrop. We talked only minimally between shots; he peered into the dark abyss (the lights blinded him), hearing my voice directing him from one transition to the next. Ronan came to this very naturally, with an open curiosity, as he is not trained as an actor or performer. He liked the concept of the boy who desired to be a bird. He had recently experienced the loss of his grandparents, so understood that I wanted to explore grief. 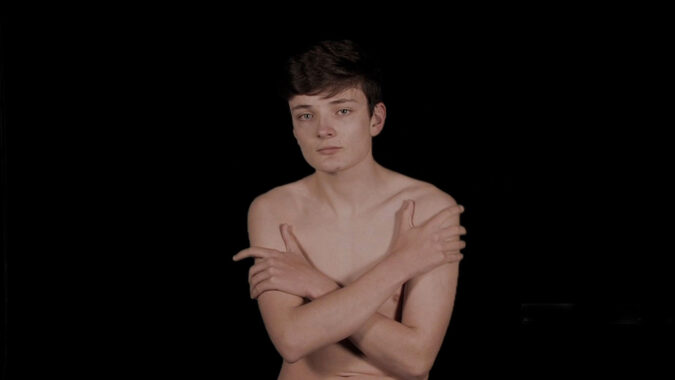 HO’D: Tell me about how you approached the filming?

BM: I approached it as a painter, making reference to masters like Rubens, Vermeer and Caravaggio, but subverting this by placing a boy into the female role. Brueghel’s Landscape with the Fall of Icarus, Matisse’s cut-outs on the same theme, and Rembrandt’s self-portraits were other important influences, while more contemporary references included David Lynch’s soundscapes and, of course, Derek Jarman. I filmed with minimal camera movement, as I didn’t want to distract from the stillness. I wanted to capture the vulnerability by focussing on his naked chest. He was feeling cold in the evening air, so his skin appears raw – translucent, with only a thin layer of skin protecting him from the external danger, thinking of our collective vulnerability with COVID-19 attacking the respiratory system. His push-back gestures are to signify the line in Máighréad’s poem, which talks about the loner’s obsession with the body; he is protecting himself rather than breaking through something. His questioning gaze casts us in the role of the perpetrator, as well as spectator.

HO’D: How did you approach the soundtrack for the film?

BM: The narrative for the film was led by Máighréad’s poem, with the visual and audio being an embodiment of its dramatic inner dialogue. This was felt by me, as an artist in lockdown, and further amplified during this period of uncertainty, in which many of us have been questioning the nature of our existence. Sound is just as important to me as the visual aspect. I worked with one of Ireland’s leading classical guitarists, Eoin Flood, who teaches music in Wheatfield Prison. This was the first time that Eoin had worked closely with a filmmaker to create a soundtrack. I initially asked him if he wished to interpret the visuals, but he opted to be directed by me, experimenting on a sound texture together. I directed the emotional resonance of the film by suggesting certain types of textures such as ‘a rhythm of wings flapping’ or ‘threatening sounds’ (for the section where the boy is pushing back) or ‘a one-pitch note’. There is the voiceover of the narrator, overlaid with multifaceted sounds including a hawk, panting breath and musical instruments played by Eoin. The reference to birdsong has two origins – Janet’s Cortociruito and my own experience of sitting in the garden listening to pure uninterrupted birdsong. Finally, I sent him a rough cut of the visuals and he cut the soundscape to this. The audio was tightly managed, as time was of the essence, and we turned it around fairly quickly!

HO’D: Incarceration is an ongoing theme in your film work, and I see Flight as a continuum of this. Were you aware of this when making this film?

BM: It is interesting that you see this, as I did not consciously think of it when making this film; but on reflection, it is not surprising… Flight is also a contemporary perspective on the story of Icarus in Greek mythology.

HO’D: Can you talk about grief?

BM: During the lockdown, my experience was of a very surreal existence. There was the daily reminder just before the Six O’Clock News – the naming of the dead. I was struck by the loss of loved ones who were dying alone; the absence of rituals to comfort bereaved relatives and friends, and the fact that Janet, too, died during this period of isolation. There was a grief overload across the world. Flight is the story of a boy who metamorphoses into a bird, embodying the thin line between life and death and capturing the fragility of this time.

Bernie Masterson is a visual artist based in Dublin.