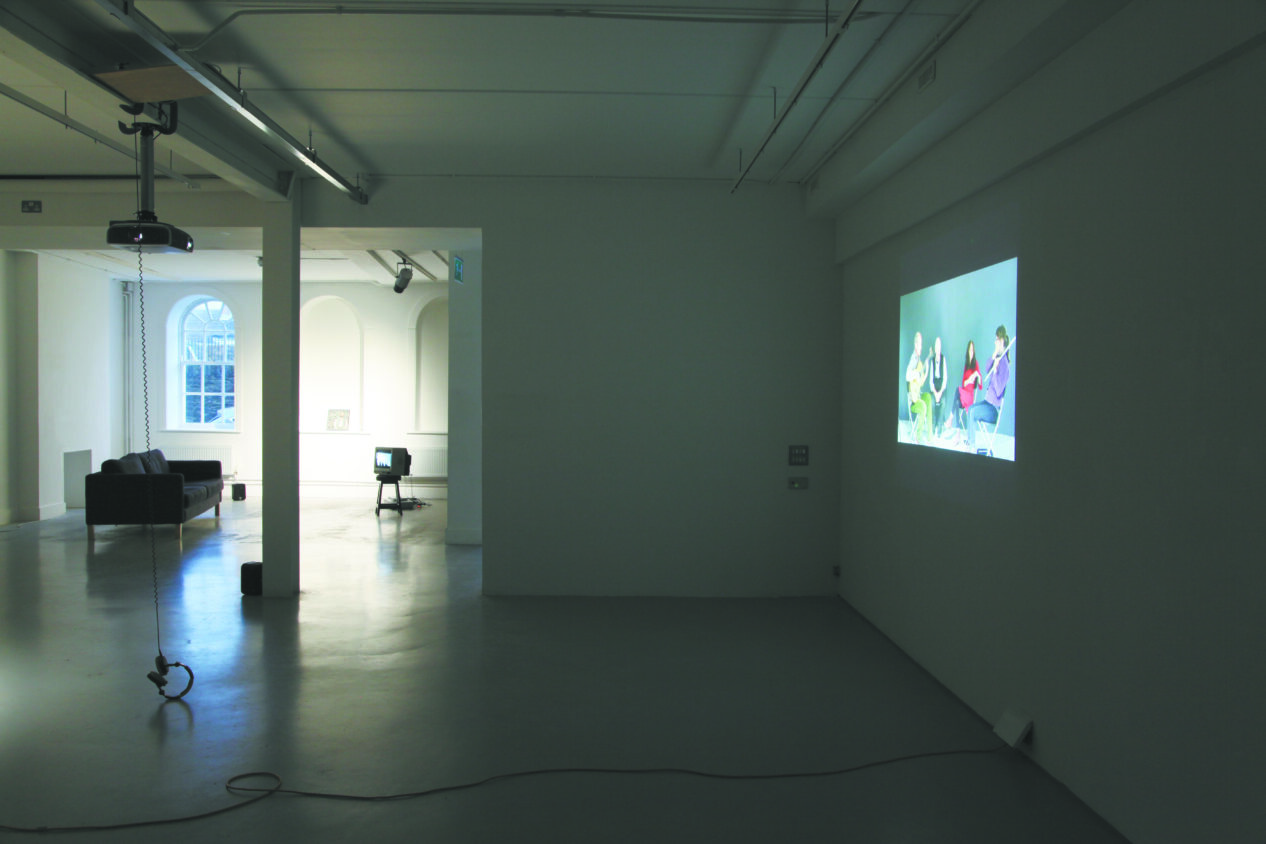 CCA’s latest show explores the temporary nature of exhibition alongside residual cultural processes. It activates the build-up to an opening performance, or the post-processing of creative method, and the legacy left by those actions. The first collaboration is founded in Irish folk music. Artist Seamus Harahan formed the group ‘Trees Prosper’ with Patrick Morgan, Christina Anna Morgan and Sara J. Barry, who, in this venture, collaborated with established traditional singer Len Graham. The musicians worked toward the opening-night performance Along the Faughan Side, and their chairs remain in an arc in the space as a part of the recorded and exhibited rehearsal process.

A full rendition of their performance plays on a cracked 4:3 television, with each song portraying romantic and nostalgic stories of local scenes. The film itself is shot outside, showing the musicians as leaning silhouettes against bright sunlight. The steady, handheld camera moves occasionally and eventually picks up enough detail and light to show the musicians against the walls of the city.

In these understated films, it feels as though the rehearsal is captured almost incidentally. In another work, the song The Rollicking Boys of Tandragee is followed by what seems to be an impromptu solo of The Bunch of Kale. This time the musicians rehearse inside, seated on the foldout gallery chairs, which squeak as they sway to the rhythm. In this work, the musicians’ process is foregrounded; the performance element, the film and the stories that are shared in the song are secondary. The lyrical communication becomes a side effect, and so its informal structure and potency remains in spite of overt re-presentation within the gallery.

A live microphone points toward the empty chairs, capturing the audio of surrounding films. It’s plugged into an old tape deck, so visitors can play another rehearsed song, The Newry Highwayman, on top of this ambient sound. This musical layering and the sound quality of the cassette produce the most evocative rehearsal record; there’s almost a synthetic session in the background. The outmoded equipment, which is used in this work and dotted throughout the collection, gives no indication of the work’s timeframe, yet the surrounding recordings are made immediate in the space when converted into ambient sound. These very subtle prescriptions and shifts in the music’s status between forefront and background, old and contemporary, play with the active/passive nature in our own receptive role: we consume their results, but without seeing the true performance, and so we are left with its decommissioned suggestions. The performers have produced another myth of the opening-night work, which can only be alluded to in this rehearsal documentation.

In her work, Kathryn Elkin addresses a collaborative archetype in an entirely different cultural realm: specifically, that of the celebrity talk-show interview, where formal transactions of influence and image-building are dressed up as casual discussions. Her work replicates and distorts the format, expanding and borrowing from two interviews with Dustin Hoffman; in one, the young actor discusses his method and, in a more recent interview, he talks about how he plays the song La Bamba to “stay loose” on set.

The work John Shuffling His Tarot Deck & Playing Guitar recreates a retro interview set-up, complete with black background, swivelling leather chair and a vase of pale flowers. Whilst a tinny and tentative guitar solo of La Bamba plays, the sitter slowly does as the title suggests, giving an awkward smile. It’s a combination that’s almost comically esoteric. John’s gestures in the title sequence are left unexplained, and the viewer can’t see any of the cards. It operates like a trailer for the next work, Why La Bamba?

In this work, shown on a cinematic scale in the next room, John sits on the same set, repeating selected lines from an old interview given by Hoffman just after he made The Graduate. Elkin prompts his lines off-camera, and they converse and joke in between, at one point discussing Hoffman’s sincerity while they imitate him. John repeats statements about method acting – “I’m not a sailor, I’m a captain” – which are occasionally overlaid with a Spanish translation and become increasingly abstracted. We join the dots between the statements as if they were rumours, assisted by John, who slips in and out of character. The mix of humour and sincerity parallels the original interview with Hoffman, which is on show in the CCA library space, itself a display of discomfort and wandering comedy. In a similar way to Harahan’s work, the performative myth is built upon, this time focusing on the man rather than the tale.

‘Kathryn Elkin/Trees Prosper & Len Graham’ is a show that riffs on cultural output on two temporal levels: the effect of time on cultural communication, and the amalgamation of two widespread points in a creative career. When combined with the brief nature of this exhibition and the artists’ one-step-removed methodology, these disparate points in time don’t consolidate but instead build up fictitious, contemporary legends of performance and performer, and new paradigms therein.