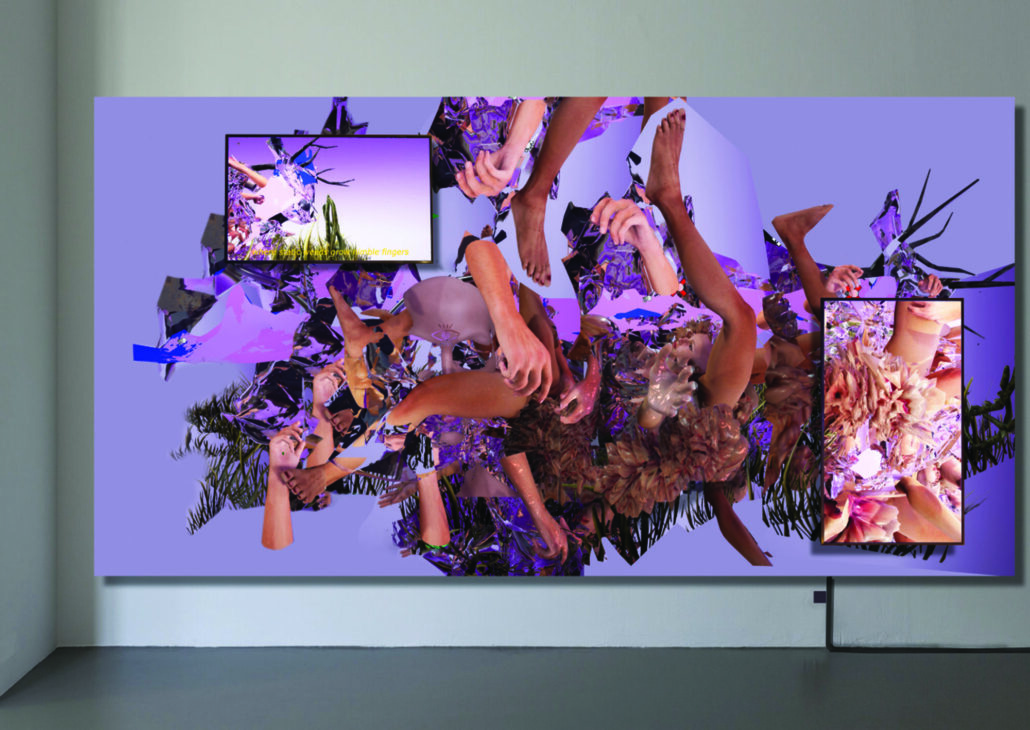 Joanne Laws: How would you describe your current medium, working processes and previous training?

Elaine Hoey: At the moment, I am exploring a variety of mediums – everything from CGI, live cyber performance, green-screen technologies, Virtual Reality (VR) and Artificial Intelligence (AI), to expanded video, photography and installation. Given the conditions of lockdown, I’m very much in an experimental phase, wanting to push the kind of work that I am making into other fields. Right now, I am exploring the potential of virtual spaces for collaborating with other artists, dancers, performers, writers and sound artists. I find that way of working very engaging and it provides a welcome relief from working on my own. In terms of training, I completed an MA in Fine Art Media at the National College of Art and Design (NCAD) from 2016-17, during which time I undertook a lot of initial exploration of 3D and digital spaces using Virtual Reality. However, when working with new media and technologies, you are continually learning and investigating new practices. It’s a field that is constantly evolving, as are the themes and critical discourse surrounding them. So, you are never really done training or learning.

JL: What new projects have you been working on during lockdown?

EH: As well as lecturing part-time in the Fine Art Media Department at NCAD, I have been developing a number of works – both short-term projects and others more long-term. I have two solo exhibitions scheduled for later this year. ‘Flesh and Tongue’ is due to open in June at GOMA Contemporary in Waterford and I am also developing new work for a major solo exhibition, ‘Mimesis’, at Solstice Art Centre in County Meath, later this year. ‘Flesh and Tongue’ is an exhibition that looks at the negative representation of the ‘monstrous’ female body through an exploration of the classic myth of Medusa. I’m interested in reclaiming that myth as a site or a space which challenges patriarchal power and subverts traditional ideals of the female form. The exhibition, ‘Mimesis’, is somewhat inspired by the current pandemic and will explore a type of duality within mimetic systems and behaviours, which reveal our capacity to adapt during times of crisis. It’s also about investigating how the body, both social and political, merges with technological systems, adapting mimetic theories, often in ideologically polarised ways.

I have also been doing a residency with the Digital Hub in Dublin since last September and have been exploring how to develop a critical framework and discourse around emerging technologies. I have been working with Dr Rachel O’Dwyer, lecturer in digital cultures in the School of Visual Culture in NCAD, and Anne Kelly, Director of NCAD Gallery, to develop a sustained and diverse critical inquiry via a webinar series, titled ‘In Public’, which focuses on the transformative nature of emerging technologies. We have some amazing national and international guest speakers, including artists, writers and academics, all working with various aspects and themes surrounding new technologies. The second of these webinars took place in early April with German-Iraqi artist, Nora Al Bardi, and Professor Barry O’Sullivan from University College Cork, who discussed ethical questions surrounding technologies such as artificial intelligence and machine learning. I have also been developing a new project with Irish designer and activist, Natalie Coleman, who is an ambassador for the UN and an advocate for women’s rights, in particular raising awareness around female genital mutilation. We are in the very early stages of developing a live hybrid cyber performance work and immersive installation, with the aim of identifying new ways in which to experience the body, identity and language. We want to disrupt different modes of reproduction – whether linguistic, mimetic, virtual, or even biolytical – that generate ‘feminine’ subjectivities.

JL: Has the pandemic changed or influenced your recent work in any way?

EH: The Coronavirus outbreak is changing the way everyone in the world is living and working. Like many other artists – who are learning to adapt to the ‘new normal’, as exhibitions, in-person public events and workshops are indefinitely put on hold – I am also using this forced downtime to create new work, experiment and to plan longer-term projects. I have also been doing some cyber performance lectures as an avatar and really thinking about the vulnerability and instability of the body, given the current situation, and how technology is somehow bridging a gap between the outside world and the internal domestic space. Therefore, this forced departure into virtual spaces has opened up some very interesting conversions around my own practice.

JL: I often consider the aesthetic appeal of your works in terms of commercial gaming technology and graphics. I’m wondering if you have any thoughts on the power and functionality of artworks that resemble computer games?

EH: For me, it’s more about focusing attention on the creative potential of this type of medium. Games are no longer just a form of entertainment; I think they also now have value in terms of cultural expression. The online gaming community has a global reach of over 70 million people. As a medium it is breaking down barriers between genres and creating interactive and immersive ways to engage with making art. Also the tools and software used within the gaming industry, many of which are free or open source, are really providing alternative means and modes for artists to be creative. Similarly, we can develop critical conversations around our virtual lives, through the simulations being played out in online gaming.

JL: Through formats like Artificial Intelligence, simulation technology and live virtual-reality performance, you have variously depicted the human body as sensual, vulnerable or superhuman, while exploring the nature of physical and non-physical borders. What happens when these constructs of personal or national identity break down and become somehow vague or abstract?

EH: I think this idea of the body, and what that means within virtual spaces, is a key part of my research this year, whether that be through remote cyber performance or examining theories of the biopolitical body through the lenses of gender or identity. I often consider cyber space or the internet as a type of third space, in which complex social, political and cultural narratives are constantly being played out on a daily basis. So in that respect, the virtual is a living breathing space.

One of my recent works, Imaginary States (2019-20), shown as part of the exhibition, ‘Desire’, at IMMA last year, sought to question themes surrounding national identity through a cyber performance, with actors performing live and remotely from both Derry and Dublin. Through this work, I wanted to blur the boundaries between real and imagined spaces and between ideologies, by highlighting the alienation of individuals within society and these types of national identity politics.

JL: Can you discuss some of your upcoming projects and future plans?

EH: I have just received a studio award from IMMA, as part of their partnership with DAS, so I’m looking forward to getting into it and continuing to develop these projects, but also having a physical space to work from and to develop installation ideas. As part of my upcoming show in Solstice and also my collaboration with Natalie, I will be working with live dancers and performers and creating hybrid live and cyber performances around the body. I love making work in a collaborative fashion – it is such a break from the isolation of me and my computers!

Elaine Hoey is an artist based in Dublin who uses contemporary digital art practices and aesthetics to create interactive installations exploring the politics of digital humanity and our evolving relationship with the screen.

The Digital Cultures Webinar Series 2021, co-hosted by NCAD and The Digital Hub, continues with evening webinars on 13 May, 27 May and 10 June.