I first learned about Ted Purves’ work when I was sitting on a bus in Oakland with two friends I knew from back in Singapore. We took the bus from Lake Merritt to Berkeley; I had an iced lavender latte in my hand that would eventually turn into peach rose sorbet and then a Blue Dream Pax pod in the evenings. When things have good names they taste better, I think, or at least advertising has successfully convinced me of this. Actually, I think anyone who has chosen their own name also knows it to be true. Trump had been President for almost a year at this point and there were many regular family-friendly protests in parks to abolish ICE. My friends pointed out things of interest to me as we drove past them: a bakery (formerly a Black Panthers’ HQ), multiple homeless encampments, old apartments, party sites and gay bars, good Korean food, and California College of the Arts, where Purves taught on the Social Practice graduate programme.

It is impossible not to notice the lusciousness of Northern Californian gardens and the wealth that must accompany being able to water plants so regularly, despite the area being on fire at that time. I had a great phone camera and couldn’t stop documenting trees full of hibiscus, cute outfits at Pride parties and the never-ending stream of anti-fascist placards. I follow a few ‘foragers’ on Instagram and have friends who enjoy making things from found produce, but my consumption remains mostly visual. Fortunately, I also have friends who make lockdown ferments and generously share these goods. In this sense, my experience of this period so far has been more social than I anticipated, in terms of giving and receiving care, of meeting new community forces and learning how to be of service in a way that doesn’t reinforce unacceptable structures.

My research into gestures began with painting and still lies somewhere in the realm of pictures. The dissemination of images online allows them to have more prominent social lives than they used to. I mostly layer mythologies, tropes from various online subcultures and use software to make collaged images that reconfigure relationships between everyday things like ‘compulsory heterosexuality’, ‘death’, and ‘history’. These reconfigurations have somehow led me down a path of becoming ‘networked’ and I have been really fortunate to be able to participate – mostly peripherally – in communities of art, care and education across the globe, wherever my contacts (many of whom I have never met in real life) end up.

The first time I encountered the idea of ‘mutual aid’ was when I lived in Sydney, Australia. This was also an extended period of social isolation for me. The people I met at gigs and DIY events (when I could summon the courage to go alone) in Newtown and St Peters were mostly punks, artists and white queers. I was 21, recently heartbroken and desperately uncool. But loneliness and aloneness have always been part of certain pedagogies, I think. I learned how to ‘get involved’ by doing the grunt work, read resources that indigenous communities shared and learned about white supremacy, colonialism, and how the movements away from these structures were often led by discussions around indigenous Australian art. Abstraction and obfuscation make sense when you consider the body horror of British colonialism, plagues, and associated trauma and addiction. Recovery programmes talk about ‘white-knuckling sobriety’, using sheer willpower rather than taking the necessary emotional steps to get through a programme. I think the process of ‘falling apart’ and becoming abstract makes sense this way too. Recovery is a fragmented process, where the shapeshifting and time-traveling of Science Fiction can begin to feel normal. 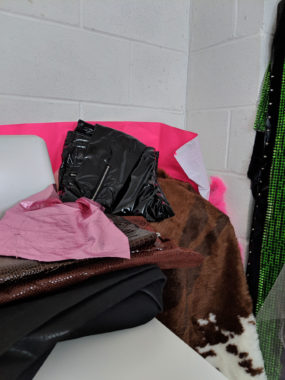 Returning to Oakland: Ted Purves and his collaborator, Susanne Cockrell, created ‘Temescal Amity Works’ (2004–2007), a project that started out as a cart that collected and redistributed fruit from local citrus trees, while also gathering stories from the residents for a collective biography of the area, investigating the overlay of urban and rural systems on community life. The cart became a space, and the space eventually received too much pressure to change its model from mutual personal exchanges to a more hierarchical format, and so it closed. Basically, it was pressured to turn into a non-profit service organisation, which defeated the purpose of the collaborative actions and overrode the DIY ethos and core values of the project. The title of Purves book, What We Want Is Free (2004), reminds me of other things I have told myself while having a terrible time, like “you already have everything you need” and “if you want what you’ve never had, you must do what you’ve never done.” The COVID-19 community groups I am part of sometimes need similar encouragement and you can end up sounding like a Tesco ad – “every little helps.”

12-step recovery literature is filled with clichés. Leslie Jamison speaks about this in her book, The Recovering, where she describes the repeated phrases as “not revelations but reminders, safeguards against the alibis of exceptionality that [masquerade] as self-knowledge.” I am writing this on the second day of protests across Belfast in solidarity with Black Lives Matter and against white supremacy, police brutality, or the existence of police at all. Standing there on the first day of protests, I thought about the clichéd gestures of solidarity we make with each other – the homemade signs, hands and sounds – and the gestures that occur in opposition to each other: black fists pointed to the sky, passerby fists gripped tightly, facing the ground. The white knuckle, the tight grip, the inability to let go; we see this come together in the images that get circulated of violence towards people who are black, transgender, indigenous, brown, gender non-conforming, and so on. Social distancing has given many of us space to fantasise, to dream and participate in utopias and to be somewhat protected from things other than the virus, because being ‘in public’ isn’t safe a lot of the time anyway. White supremacist capitalist patriarchy really believes its own hype.

I have always felt like the best place for me was somewhere else; that I would find better communities if I left wherever I am, at any given time. My art would be ‘better’, I would encounter more ‘radical’ collectives and movements in other cities, where people might actually know how to make escaping all of this a real possibility. Being forced to think about staying in one place has cleared pathways for me in a way and allowed me to reconfigure my practice to make more space for gestures that incorporate justice, mutual generosity and solidarity into digital networks, as well as my own neighbourhood. As my work shifts to become more “humus than human” (Haraway) and as my studio continues to be slowly replaced by my allotment, I am learning to rethink relationships and kinships, to exist within the ‘gift economy’ and to allow for fleeting intimate possibilities between people, animals and other organisms we share this planet with. Abstraction offers itself as a tool to look beyond the familiar, beyond what we know – and we know that things haven’t been right for a long time now. I look forward to seeing what grows from this huge pile of s**t.

“Every day it gets a little easier, you just have to do it every day.” – That one is from Bojack Horseman.

Jennifer Mehigan is a Belfast-based artist and researcher.
jennifermehigan.com