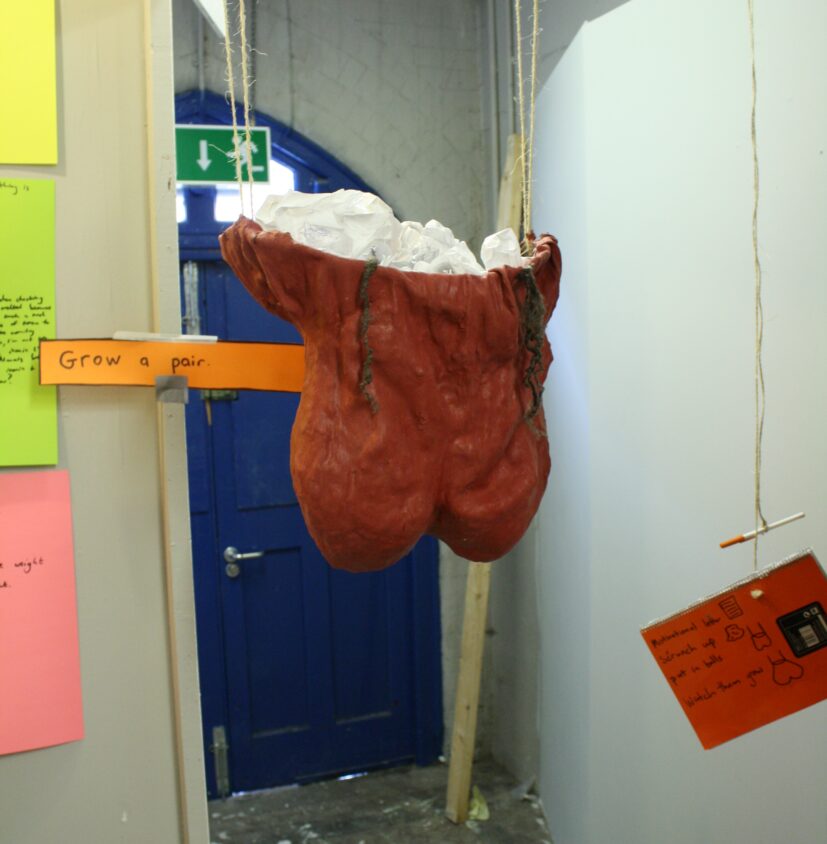 SARAH DEVEREUX WAS INVITED TO CONTRIBUTE AN ARTWORK COMPOSED OF TEXT AND DRAWING FOR ONLINE VIEWING. THIS CONVERSATION BETWEEN JAMES MERRIGAN AND THE ARTIST AIMS TO DRAW OUT A CONTEXT FOR THIS ARTWORK, WHILE ALSO BROACHING THE SUBJECT OF SEX AND ART. James Merrigan: After experiencing your BFA Degree show in the basement of a building on John’s Lane, Dublin, I was smitten. You disappeared off my radar for a couple of years until sometime in 2014 I caught the tail end of a thread of your perverted commentary on Facebook. There was an uncensored precision to it all that I equated to art, even though it was being displayed on something as fugitive as social media. To my mind you were a cross between American poet Patricia Lockwood’s Twitter ‘sexts’ and Raymond Pettibon’s hyper-dialectic drawings. I questioned why I didn’t get to see more of this kind of stuff, sex stuff, in Irish galleries. Do you know why sex and art don’t tag team as much as they could in the Irish arts scene?
Sarah Devereux: Well James, is this “tag team” a case of art slapping sex in the hand as its partner to tag in against the world, or is it a question of art vs. sex? You have to be more specific when it comes to tag teams. Who is against whom? Is there consent? Is there equal involvement? Is there mud involved? These are the things everyone must ask before partaking in a tag team between sex and art. Is the sex willingly becoming art or is it trying to just remain sex? Are we too afraid to tag in? Or do we think we are better than having sex in the gallery. Of course I mean sex as a subject matter. As a matter of interest, have you?

JM: As an artist I never tagged sex in the gallery; well, not that I am aware of. What I mean by that is, as an art critic I have noticed that sex is everywhere in the Irish gallery in its outright denial. So base objects that look like cocks and vaginas are intellectually denied as sex objects, or dressed up in theory that removes the artist from the subject of sex. ‘You are the one seeing the dirty pictures’ is the response by the invisible artist. I do respond to what you say about the fear and the attitude towards sex – that we think we are above and beyond sex in the gallery, or are ‘in control’ of our primal instincts. For you, is there a pressure to conform to the status quo?
SD: Without sounding like a sappity Ann, I automatically and instinctively go against ye old status quo. When putting together my degree show (*shudder* three years ago) one of my tutors said, “it’s like you don’t realise that this is an important event”. This, for me, was the greatest compliment. Because it was exactly what I was attempting to convey: my ‘clusterfuck’ of a haphazard show shoved in a corridor behind a student whose space kept growing and growing and growing (I think her show was about capitalism).

JM: So you are aware and maybe reveling in or frustrated by the fact that your way of making things and expressing things lies somewhere outside of what is considered art?
SD: Well, I sort of took a bit of a side step and a jump away from ye old gallery art, creating work in formats such as ‘zines’, and displaying and performing these at somewhat casual events. Are we back to that question, what is art? SHIT… How much am I getting paid per word, let’s do this! Wait, am I getting paid for this?

JM: Going back to what I said earlier about equating your Facebook commentary to art, which may seem sacrilegious and not ‘serious’ to the art cognoscenti, how do you see your verbal dalliances online? Is it art, research or just tipping your toe in the public consciousness about what is possible to verbally express?
SD: So you were basically Facebook stalking me is what you are trying to say? In the time we have been Facebook ‘friends’ (I checked: December 2012) you have never once liked, commented or shared anything on my page. You’ve pretty much just been an observer of my dalliances – a dalliance if you will! I do enjoy writing, whether they are rambles, rants or recounting tales of wit or wine. Maybe it’s a racket on your feed or maybe I’m a raconteur feeding you. I do treat it as a platform though, a dirty digital soapbox.

JM: Artist statements invariably promote and proclaim intellectualism above instinct and subjectivity. For me your “textual sexuality” (Dodie Bellamy) includes the street and the library, life and theory, night and day. You know how they say to models ‘don’t over think it’… well, what’s your process? Is it reactionary or carefully thought through?
SD: I’m definitely more of a reactionary-vomiter (get it out of my system and compile a pile of bile and just go with it, and trust that the yellow glow will be enough to impress even an impressionist). By the way, are you trying to call me a model? OMG thank you! I’m flattered, that’s so sweet xoxo.

JM: If it is true that the subject of sex doesn’t pop up in Irish galleries as much as I think it should, who are your idols? Are your idols in books, online or abroad? You are probably a Liam Gillick fan, right? Not to suggest Liam isn’t sexy or doesn’t make sexy art? He is; he does.
SD: So I just Googled Liam Gillick, he is very good at ‘smising’ (Tyra Bank’s term for ‘smile with your eyes’, created for the 13th cycle of her hit reality show America’s Next Top Model.) However, my idols are far less slick than Liam. I get inspiration from people and things that are more tacky or cheesy, basically, the mundane daily norms (they’ll be put through my conveyor belt into my noggin’ and come out tampered).

JM: Speaking of me “stalking” you online, for your Facebook cover photo you have a picture of yourself and American filmmaker John Waters shoulder-to-shoulder and smiling. A fan?
SD: The god in my life is most definitely John Waters, who I got to meet in 2014. I was interning in a reality TV company in NYC at the time and was showing a colleague some clips from a John Waters film, as he had yet to watch any of his work. I went into a hazy daydream with sunshine and lollipops, and rambled about what I would say and do if I ever got to meet him – I had so much to say. Not even an hour later, after I had done my daily stash bag with as much free food from the kitchen as possible, I picked up the weekly magazine that was always floating about the office for the subway ride home. Flicking through the magazine on the train with eyes glazed over, I turned the page and there it was, a half-page advert: “Meet John Waters”. He was promoting his new book and was doing a reading and signing the very next day. I burst out crying, the HEAVING sort, and then hysterically laughing at how much I was crying. Finally, a right of passage. I was that crazy person for the commute home. I put together a collection of my most filthy and depraved drawings as an offering and spent $26 (out of my last $33 for the week) on the book in order to guarantee meeting him. It was like a religious experience. He is my glory hole. But all I could do was cry and mumble something about my clammy hands. A dream!

JM: Is this verbal dialect you perform an alter ego? What I am asking is, although I have never spoken to you in person, I have talked to you on the phone. Are there two different ‘Sarah Devereuxs’?
SD: I don’t think anyone shows all aspects of their personality to every person they meet/talk to. I wouldn’t say it’s an alter ego… but that being said my default voice bounces from a melodic Derry accent to a sassy 1940s New York news reporter.

JM: When we first discussed your contribution to VAN, I said something about the subject sex in relation to art being always subsumed by the politics of gender and feminism and that raw sex doesn’t get a mention in criticism or in the gallery. As a female artist who makes art about sex, are you interested in the gender and feminist question? In other words, is your work an instinctual or academic protest?
SD: Please refer to what I wrote in the online artwork for VAN, the bit about Mel Gibson will hopefully explain my answer to this because I am weary and this interview is way past due!

Sarah Devereux made a website that hasn’t been released or updated in about two years. It’s www.cargocollective.com/sarahdevereux if you would like to offer her opportunities that she could later add to this site don’t hesitate to contact her. No prank calls please.