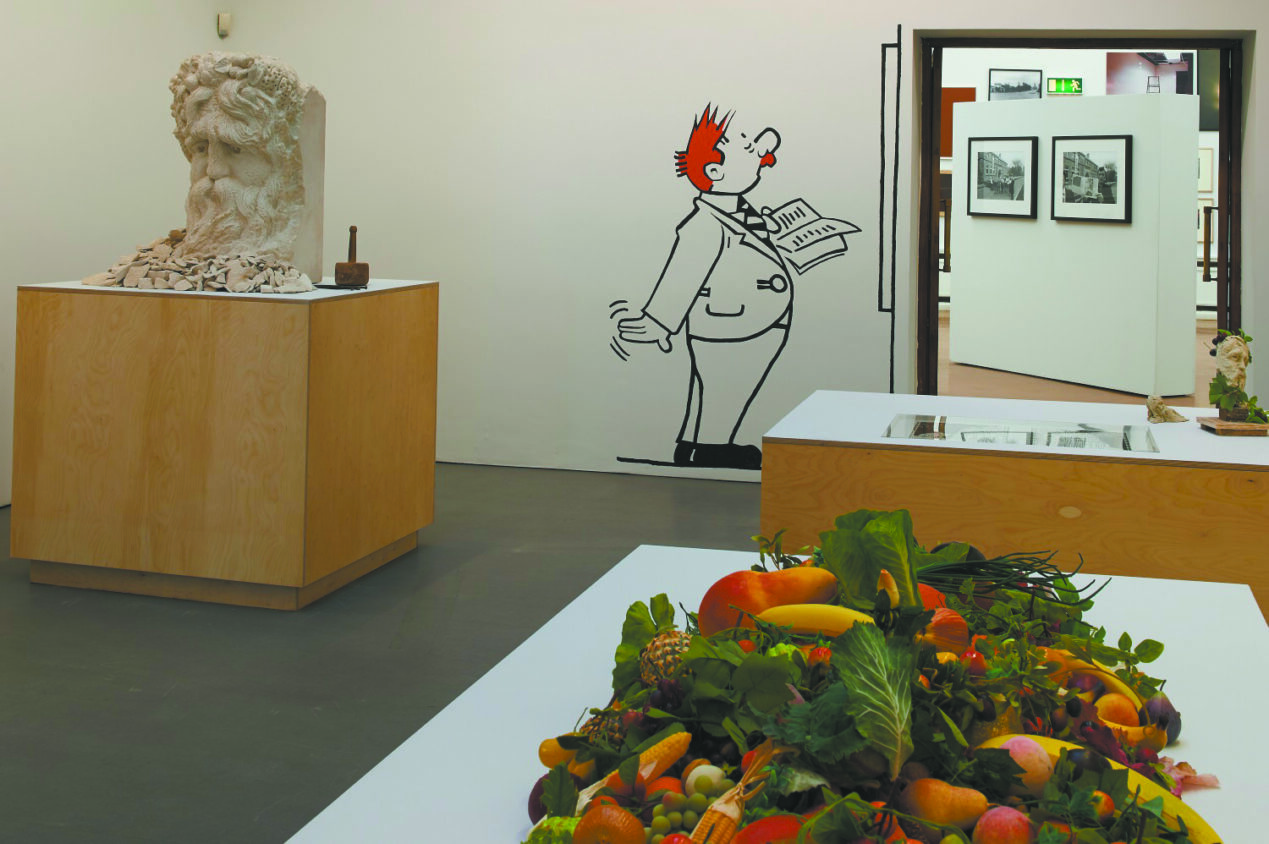 “Man was born naked, without claws, unable to run fast, with no shell or natural armour. But he could observe nature and imitate it. He saw how water ran down the side of a hill without sinking, and then invented a roof for his house. Soon more houses and villages appeared, and more stones were needed. Mighty tools and machines were invented. Demand increased. My chisel got harder, my hammer heavier. Villages turned into towns…towns into cities…stone…rock…next stone…next rock.”

Lynch’s project ‘Adventure: Capital’ traces a journey around Ireland and Britain following the personified spirit of architecture and sculpture “from myth to modernism”. Using narratives, sites and objects, Lynch enacts a unique form of cultural anthropology and investigates art, form, function and worth. From Greek river gods to public art, via abandoned quarries and a traffic roundabout, the scale of materials and research is exhaustive.

Commissioned for Ireland at Venice 2015, ‘Adventure: Capital’ is exhibited alongside a selection of Lynch’s previous artworks. The work is an anthropomorphic archive composed of stone, clay, plastic, lithography, brick, metal, photography and video, the latter an unreliable narrator well-versed in the art of storytelling. The film presents a journey that begins, poetically, in a quarry, as a stone walks out of its burrow, inheriting the earth and reproducing fruitfully upon its surface.

“As I touched it, I felt connected, and part of a forward movement. The owners of these wonders must believe these stones have come through a special intervention of fate … Remnants dug up out of the earth are no longer covered and pitifully hidden in mud.”

The film cuts to Liverpool airport and a sculpture of John Lennon. Lynch presents an unfamiliar history of modern sculpture, which jumps from one airport to the next, and ends in a lament for an abandoned sculpture on a County Cork roundabout. An animated sequence featuring the sculpture tells of its neglect and abandonment. The piece, which started its life as a community commission, is now rusting away on the margins of that community. In stating, ambiguously, that “we exist; that is strength”, Lynch is not just exploring how the public interacts with art but how art interacts with the public. In swapping the subject and the object, he investigates how art behaves towards society.

The precarious positioning of art and society is reflected throughout the other works on show. A Church Without a Steeple examines the history of modernism in Ireland. A video piece accompanied by reproductions of newspaper cartoon from the 1950s, its title references Knockanure church, built without a steeple to the apparent bewilderment of the local population. Through a montage of sites – the gallery, church, storage area, carpet store and architecture school – the possibility of a single viewpoint is shattered. The anecdotal public reactions recorded do not reflect the canonical idea of a rational modernism, but instead portray how modernist works were caught up in the nitty-gritty of the everyday.

In Bill Clinton, Lynch explores the ways in which art adapts and interacts with everyday life, pushing this idea to its comical limits. For his 1998 presidential visit, the town of Ballybunion commissioned a bronze sculpture of Clinton mid-golf-swing, but, due to a delay with the work, a plaster cast, spray-painted bronze, was displayed instead. In the film, Clinton’s golf ball is reproduced and presented on a plinth surrounded by photographs from the tour. This act a vandalism inspired headlines like: “One of the president’s balls is missing!” (The ball has since been recovered.)

Investigation of public reaction continues in A Rocky Road, which uses the histories of existing artworks to explore the intersections of reception, protest, vandalism and the media. David Lilburn’s print Towards from the Forceps to the Chains of Office, featured in Eva 1984, depicts the artist reclining naked with an erection. On 2 November 1984, the Limerick Leader were alerted to the plans of local café owner Richard Coughlan to destroy the work. After Coughlan smashed its frame and made to spray it with paint, Hugh Murray, chairman of the exhibition committee, pushed him away and a struggle ensued. Both Lilburn’s original work and the photographs of the tussle are exhibited. The original artwork has been usurped by its subsequent afterlife.

‘Ireland at Venice’ is a multidisciplinary exhibition incorporating ethnography, history, archaeology, archiving, storytelling and satire. The extensive research at times seems divorced from the exhibition. Reading the Irish tour supplement is necessary to really understand the work. Similarly, the juvenile photo essay style doesn’t always convey the complex themes in the work. This disjunction between conception and execution is perhaps due to the fact that Lynch is ‘telling tales’ – storytelling is the modus operandi. We already know that stories are unreliable, sometimes cheeky, often abstracted. Turning away from the subject, Lynch concentrates on the object, illuminating the gaps in the verifiable. By exploring the ways in which the object acts upon the subject, sources, sites, and artefacts are given new afterlives. They each present their own narratives, whether you believe them or not.

Gemma Carroll is an art writer based in Cork.