Small Town Portraits is the second publication of portrait photographs by Dennis Dinneen (1927–1985) taken in the back room of his pub, Dinneen’s Bar, Macroom, County Cork, between the 1950s and ‘70s. The first book accompanied the exhibition of Dinneen’s archive at Dublin’s Douglas Hyde Gallery in 2017. This new edition is the largest collection of the photographer’s work made available to the public to date, with over 70 reproductions, many printed here for the first time. The scale and tone of the publication reaches for Dinneen’s position in the canon of Irish twentieth-century photography, yet his untroubled, at times poignant, and inherently everyday images sit comfortably in the snug of Irish vernacular art.

Over the past few years, Dinneen’s photographs have gathered recognition outside of Ireland (via the BBC, National Geographic, The Guardian, etc.), as well as important acknowledgement at home by entering the collection of the National Gallery of Ireland in 2019. A number of portraits have become almost iconic through their familiarity, or at least instantly recognisable as Dinneen’s, if only by the recurring patterned wallpaper, backdrop curtains and pub ephemera from his informal studio. However, it is almost always the unselfconscious and neighbourly expressions of the sitters that connect us with Dinneen’s eye. Small Town Portraits introduces us to many new characters from Macroom’s community by presenting unseen images from the archive of several thousand negatives and also takes us out of the pub’s back room and into the nearby theatre and halls to show locals in costume for performances or ceremonies.

Daly & Lyon’s graphic design purposefully sidesteps any identifiable style from the era of the photographs and reactivates the Dennis Dinneen Archive for a contemporary audience. The grotesque typography and monochrome layout are comparable to styles frequently utilised for mid-century social history photography (such as the Café Royal Books series). It abstains from the charming, nostalgic revival of Irish modernist design that is very much present in the Harp and Phoenix Ale branded signs in the background of Dinneen’s pub interior. The heavy-set and declamatory typeface brings to mind Daly & Lyon’s design of Sean Edwards’ Undo Things Done (Liverpool and Wrexham, 2019), which draws from newspaper headline fonts and a social realism aesthetic. It emphasises the engagement in politics, current affairs and education that has historically both limited and inspired working class communities. The stylistic choices of Small Town Portraits echo the strong character of the folks portrayed in Dinneen’s photographs, despite the hardships of emigration, unemployment and conflict that surely touched their lives. Daly & Lyon’s undecorated design also corresponds with the inevitable editing made by Dinneen in the darkroom, when focusing in on headshots for passport photographs and such, capturing the true likenesses of his sitters, and cropping out the distracting signifiers of time and place. 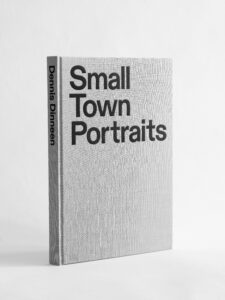 The book also features a responsive, and perfectly titled, text by Irish writer, Doireann Ní Ghríofa. Her poetic and fragmentary essay, ‘Time, Folks, Please’, offers a contrast to the sharply defined aesthetic of the book in her descriptions of a slumbering photographer in an upstairs room above a pub, twitching in his sleep, his dreams filled with the flickering images of his studio: “Every night, his dream unspools a different reel of people.” Resounding with the bubbling undercurrent of mid-twentieth-century country town life, Ní Ghríofa’s essay is a spellbinding parallel to Under Milk Wood (London, 1954) by Welsh poet, Dylan Thomas. Ní Ghríofa’s lilting prose floats above the landmarks of her reverie-induced town, just as in Thomas’ radio play, and each writer possesses the dreams of sleeping souls; visualising their aspirations, fears and secrets, and forging them for evermore in the fabric of their local haunts. Ní Ghríofa’s brilliant association to the vitrified brain of a sleeping body preserved in ash at Pompeii awakens the possibility of suspending a sliver of a dream for eternity and alludes to Dinneen’s mastery of this sensation in his photographs.

In the same way as viewers of the photographs begin to imagine a personal history for each of Dinneen’s sitters – based on their clothing, hairstyle, pose and expression – Ní Ghríofa alights on the inconsequential but special items, articles and traces that indicate their roles in their local community, whether a priest, poet or performer. The twitching wrists and ticking watches punctuating her text signify the dreamer’s connection to reality, making tangible the fleeting hold of a moment in time: “Tick falls the drop, tick, the rippling circle, and tick, its disappearance.” The persistent clock reminds me of Jonathan Glazer’s celebrated black and white ‘Surfers’ advertisement for Guinness in which the narrator drawls: “Tick followed tock followed tick followed tock followed tick. Ahab says, ‘I don’t care who you are, here’s to your dream!’” Glazer’s reference to Melville inspires a connection to a series of photographs that would be familiar to regulars at Dinneen’s Bar –  the publican’s snapshots of the filming of Moby Dick (John Huston, 1956), shot one hour east of Macroom, in Youghal, County Cork. 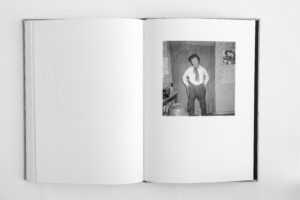 This spirit of performance and character acting, whether as an upstanding parish member or the town rogue, is apparent in many of Dinneen’s small town portraits. His subjects take on a part when the camera is focussed on them, even if the role is simply daughter, son or parent. The curtains and screens that provide practical backdrops – both in the pub’s back room studio and in the local theatre – expose the setting and context, as much as they are intended to obscure or detract from the complication of everyday life. The attention of Dinneen and his camera, coupled with the rarity of the occasion, encourages his sitters to become aware of the ‘event’ of being photographed, and we encounter them rising to the occasion of their personal moment in the spotlight.