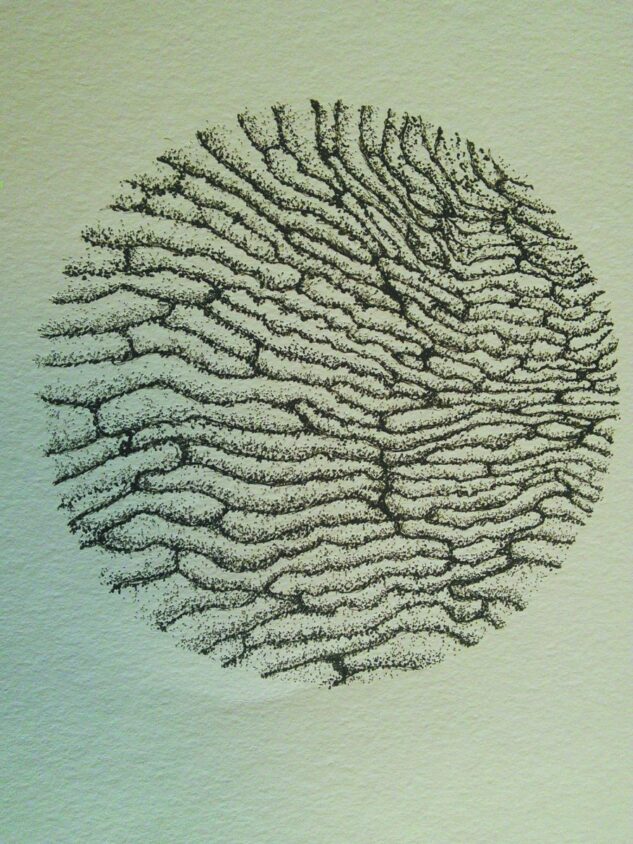 Arriving at Ballina Arts Centre on a wild November morning and seeing the River Moy in flood, the logic of Mary Patterson’s exhibition seems very clear: to try to find responses to nature through art. The appropriately named ‘Paper Trails’ features a series of works on paper created through a formidable range of drawing and printmaking processes. Patterson’s use of diverse techniques forms part of her quest to identify a medium and a language that can convey the beauty and complexity of nature. The artworks that feature in the exhibition are displayed in the open-plan landing space that curves out towards the adjacent River Moy. This light, airy space provides an ideal setting for the works in close proximity to nature.

‘Paper Trails’ encompasses a range of methodologies evident in collographs, charcoal drawings, drypoint intaglios, monoprints and a series of finely-detailed pen and ink works. Patterson depicts a broad selection of imagery, from small natural forms like lichen and stones to sweeping landscapes. There are animals too – hares, goats, frogs and fish – depicted in various contexts.

The collograph High Summer is a visually rich work that features intense yet naturalistic colours, with an unconventional ‘all overness’ to its composition. A sense of imposed order on the chaos of nature is also prevalent in two groupings of highly-detailed pen and ink drawings that form the most persuasive and eloquent subsets within the broader collection of artworks. The drawings are small in scale and use circular compositions to move away from the conventional pictorial structure of landscapes

The drawings are presented in two sets, and centre around the artist’s locale of Foxford, County Mayo. The first group of four images contains two distinct representational approaches. Two images, entitled Game of Thrones 1 and 2 depict the earth from above and show mysterious earth works and boundaries barely visible at ground level but clear and graphically fascinating when seen from above. By contrast, the two images displayed alongside are of things seen in extreme close up. Ripples on the Shore and Lichenform are akin to magnified studies of nature or laboratory samples seen under a microscope. They share the patterns and rhythms of the macro images and the same fine detailed pen and ink work.

In the second set of images, Contornare, Lough Cullin, Patterson combines two distinct types of drawing. The central motif is a mineral-like structure composed of parallel lines reminiscent of those indicating terrain on a map. Countless minuscule circles bound this island or rock-like form. The formal simplicity of black and white enables Patterson to play with layers of associations in the imagery while still retaining a sense of continuity. Rivas: the Windings of the Moy seems to channel art historical references: a river snaking off into the distance recalls the idealised landscape of da Vinci’s Mona Lisa.

In the statement accompanying the exhibition, Patterson quotes French painter and printmaker Pierre Bonnard: “Art will never do without nature”. The choice of Bonnard is an interesting one. He was an artist whose work was predicated on a restless search for visual responses to the complexity of the natural world and on overcoming the difficulty of transcribing his observations into a form that could communicate eloquently to the viewer. Making precise patterns and rhythms from the complex forms of nature is a way of communicating their poetry, layers of history and meaning.

Bonnard also made art about what he saw around him. His work is characterised by the use of flurry of small marks, which come together to form dense and nuanced surfaces. He used the small rooms of his house and the rhythms of everyday life as his subject matter, as though the whole universe could be viewed through the lens of his immediate surroundings. In a similar vein, Patterson has used the land, its outward appearance and the layers of history just below the surface, to make a series of works that have, for her, the same immediacy and seriousness. In her exhibition notes, the artist outlines her interest in the traditional ways of harnessing the land as well as man’s impact on the natural world. Patterson’s mark making reflects multiplicity of ways in which the land can be represented, as terrain, as a series of boundaries, as mineral and botanical forms and as geological phenomena. Using the marks made on the landscape by man’s interventions over centuries, Patterson charts the effects of colonialism, changing societal structures and the tensions in our relationship with nature.

Andy Parsons is an artist based in Sligo. He is the founder of Floating World Artists’ Books.