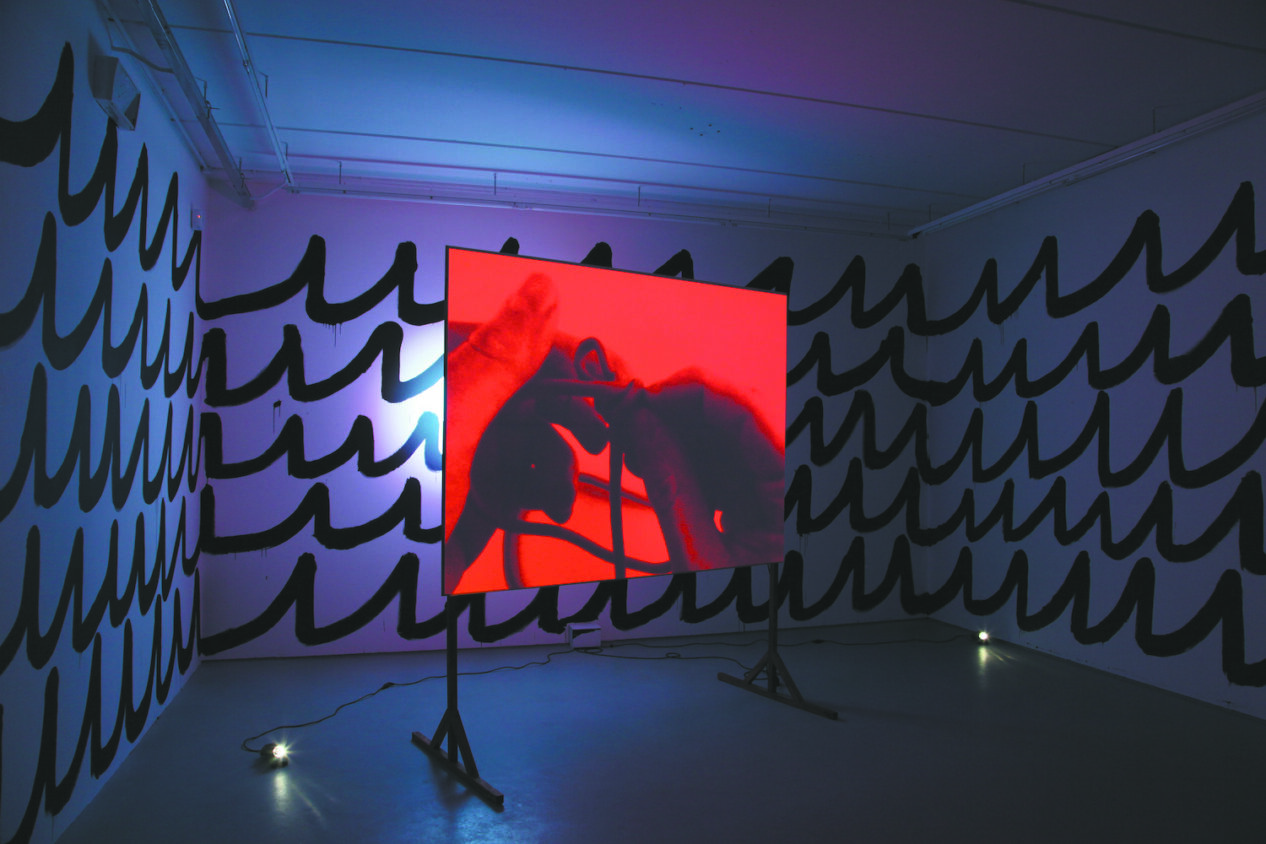 I recently took a ‘How Millennial Are You?’ personality quiz while I should have been searching for a job, if you can digest the irony. “You are asleep. Where’s your phone?” was one memorable question. There could only be one answer: “On the pillow next to me”.

Benedict Drew and Miguel Martin dig into this field where the human-machine hybrid grows. Miguel Martin’s sculpture Put to the Sword is a bronze-cast of a head mask sourced from the internet. It is set alone on the floor of a bare space partitioned off by a copper lattice curtain and lit by a light bulb suspended at waist height just above the sculpture. The suggestion is that this has some relation to the archaeological phenomenon of beheaded ‘bog bodies’, and it’s true that the sculpture evokes a sensation of burial. The coppery partition and warmth of the light bulb match the hue of the sculpture, subtly implicating the space in the destruction and preservation of this person. In ‘The Saw Tooth Wave’, Benedict Drew presents dioramas of images and objects observing each other. Four hanging paintings of faces are arranged in a circle, watching an abstract film of shifting colours and patterns; in another space, a video projection displays an un-interpretable film, with a large tree-like structure situated at the other side of the room where we imagine an audience would sit. Its branches hold tambourines that rattle in response to the audio track of the film.

‘Saw Tooth Wave’ refers to a waveform of the same name characterised by repetitive peaks and troughs, climbing to a sharp peak of frequency then abruptly dropping back down to a base line and so on, illustrating a jagged line of teeth that gives the wave its name. It is most commonly encountered in digitally produced music, but the sawtooth wave is also the type of signal used to produce visual images on CRT-based televisions and computer monitors. On CRT screens, the ‘refresh rate’ may be understood as the frequency with which the signals are repeated, and the more frequent the repetition, the more stable the image. In effect, the sawtooth wave is the DNA of the contemporary digital image, even if it is no longer dominant with the development of LCD screens. Drew digs symbolically into this foundational metaphor of digital media: it is literally produced through reproduction; there is no original.

This vacillation between originality and reproduction is the most salient quality of Put to the Sword. As a viewer, I don’t trust the provenance of this object. Ostensibly it is a casting made from an archaeological artefact, but how many times removed? Did the artist cast the actual mask or a reproduction of it? Did he buy it from a dodgy eBay seller with suspiciously favourable ratings generated by click farms? There is a scarcity of information that would make this sculpture opaque and unapproachable, yet from this knowledgeless chasm emerges the idea of the bog bodies. Whether this is part of the object’s origin – once belonging to a beheaded bog body – or simply aimed at setting the work in context, is besides the point: this is an object of layered, multifoliate versions.

In her film Is The Museum A Battlefield?, Hito Steyerl uses an iPhone as a symbolic device to transport an image through its versions on screen, from the sight of a battlefield in Turkey through to a Berlin museum, the Art Institute Of Chicago, then herself. “I tried to follow the bullet backwards, to its origin … and I found a picture of myself actually shooting video on an iPhone with a caption ‘This Is A Shot’.” Steyerl takes a starting point similar to Miguel Martin by critically mining the history of a single incident – the death of her friend Andrea Wolf – as Martin does with the ambiguous provenance of this mask and whomever it represents. Put to the Sword approaches the archaeological with a scarcity of information, rather than a glut, preferring the speculative voice to the authorial.

‘The Saw Tooth Wave’ is not given to any voice at all: rather it obfuscates the authorial, not through speculation, but through an indulgence in the logic of the subject. A screen can only conduct an image by constantly refreshing it in sequence, and it is impossible to pick one millisecond and say “This – this is it!” Thus, we are complicit in constructing the things we view. The meaning – if that is the correct term – of ‘The Saw Tooth Wave’ is not delivered; it is absorbed as an ambient sensation.

The CCA presents two differently textured exhibitions that fluctuate between sparsity and density. They observe and circulate through each other, jointly imagining futures where creation gives way to experience. A future where this thing presently sleeping next to me, quietly producing images, telemetry and ad profiles, may one day work for me – as me – while I sleep. I don’t know how I feel about that, but at least I could stop job hunting.

Kevin Burns is a Derry-based artist and critical writer.