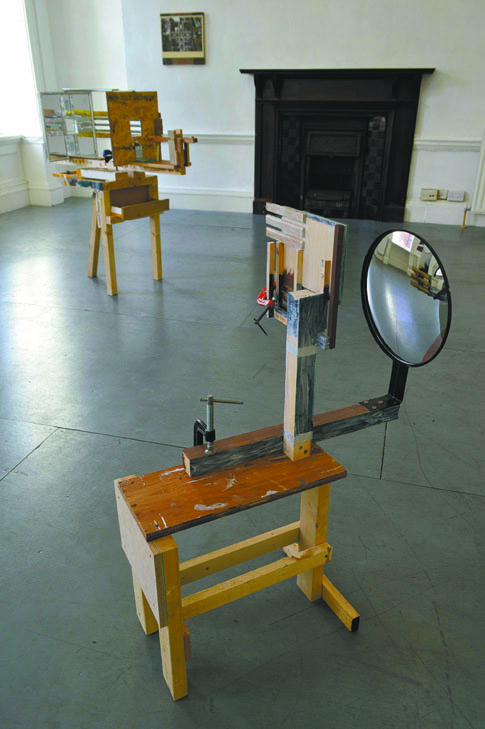 Eight Gallery is housed in a large room on the first floor of a Georgian mansion on Dawson Street. Natural light enters through the grimy panes of three tall sash windows overlooking the street. A redundant chandelier shines weakly from the ceiling rose. Things Made for Drawing is a small, formally cohesive show, its eight works placed sparingly around the jaded but elegant room. There are six wall works in two sets of three, their titles, Three Rock and Kilmashogue, referring to well-known locations in the Dublin Mountains. Each of these sets has a causal connection to one of the two remaining works, a pair of squat, jerrybuilt structures standing apart on the grey painted floor. The group entitled Three Rock subdivides into Looking Down, Looking Out, and Looking Up. The individual works are similar in material and formal configuration but differ, as their titles suggest, in the perspectives that their representational elements depict. Grids of taut, variously coloured string wraps the upper and lower sections of small panels. Set between these woven matrices, smaller panels contain thinly painted views of a wooded landscape. The strung borders are a frame of sorts and, simultaneously, a sort of code, their colours and configuration in visual correspondence with the painted elements. The structure standing nearest to this set is called Traffic Mirror. A provisional-looking framework of timber off-cuts (screw-heads and clamps abound) supports an armature of thin wooden laths and variously shaped mirrors. A circular one at the head of the structure is the mirror of the title. This armature also appears within the painted sections of the wall panels, depicted as a viewing apparatus, an eccentric tool through which aspects of the landscape have been variously framed and refracted.

The group named Kilmashogue presents a similar set of relationships. Three wall panels each contain aspects of the named location. Each panel has similar borders of tightly stretched string. The second floor piece, Sliding Mirrors, is larger than the first but is similarly constructed from timber, with opposing surfaces of reflecting materials. It too appears within the painted elements of the related wall panels. This tricky play of object and image is complicated further by the nature of the depicted landscapes themselves, Three Rock and Kilmashogue being areas of ‘natural’ beauty which are synonymous with the careful management and cultivation of Ireland’s reforestation programme. The landscape is as much a construct as our depictions of it. The artist himself also appears in the work, reflected in the viewing devices integrated within and disrupting his painted settings. Artifice is everywhere, colliding in a play of endless referents.

Tilted planes, a muted palette, the collision of depicted objects with the objects themselves; for all of the post-modern playfulness in Lunney’s work it’s the modernism of Picasso and Braque, particularly the twin peaks of analytical and synthetic cubism, that his work most strongly evokes. Think of Picasso’s Still Life with Chair and Caning (1912), a tiny masterpiece effectively yoking together painted representation, collage and the frame itself into a complex little oval. The compression of pictorial space achieved by Cubism is both mimicked and contradicted in Lunney’s eclectic mash-ups of scale, texture and sharply juxtaposed points of view.

Our heads may be spinning but experiments with composition and form don’t carry the urgency they once did. The idea of progress, inherent in the roped together ascent of the cubist pair, is hardly available to contemporary artists, however unorthodox they may be. These days an artwork is more likely to stand or fall according to its own creed, its own believability; in an epoch without rules there are no more ‘isms’ to construct or deny. Lunney’s painting – his actual use of paint – is sufficient to build his prismatic compositions, but there’s no surfeit, nothing extra to hold your gaze. His use of string, the sense of the visual and the tactility this brings together is more satisfying, and is perhaps indebted to the artist’s background in printmaking.

An artist’s print can operate on one hand as merely a copy of something (a reflection of its own matrix) and on the other as a peculiarly rich mark-making system. In previous work Lunney has harnessed the medium of etching to good effect, nesting starkly black and white images within complicated wooden frameworks. His renderings with coloured pencil and acrylic are less emphatic. They lack the bite of the printed line, its distinctively embossed authority. Ripe with reflections, distortions and a kind of object-based intertextuality, in teasing out your attention these works remain fixated on the modes of attention themselves. This has its merits but I found it frustrating. I longed for something definite – a tension to match the tautness of those strings – but definition is a quality this work seems determined to sidestep.

John Graham is an artist, lecturer and writer based in Dublin.