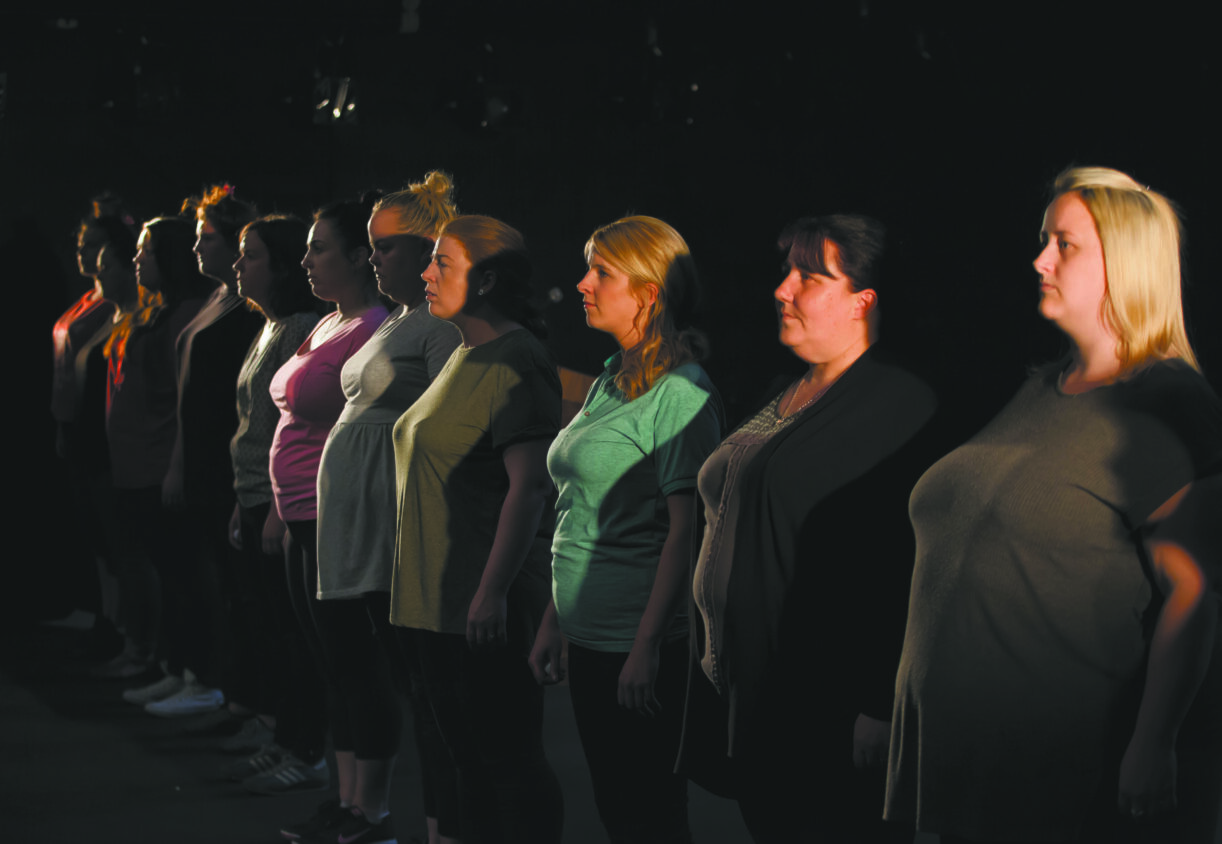 FIONA WHELAN TALKS ABOUT THE ONGOING PROJECT ‘NATURAL HISTORY OF HOPE’ AND EXAMINES SOME OF ITS HISTORICAL ROOTS AND TENSIONS.

In a 2012 lecture, Tom Finkerpearl used Monty Python’s popular 1979 satirical film The Life of Brian to illustrate a point about a crisis in the art world. [1] At an angry confrontation between the People’s Front of Judea, which the character of Brian had joined, and another activist group, the Campaign for a Free Galilee, Brian calls out to suggest that they should in fact be fighting their common enemy: the Romans. Finkerpearl uses this comedy moment to highlight a tendency in the art world to become consumed in ideological arguments pitting one form of creative approach against another at the cost of a collective fight.

Drawing on Paul Starr’s article ‘The Phantom Community’, he describes historical social change movements that adopted an ‘exemplary’ position, such as Mahatma Ghandi or Martin Luther King, and those in the ‘adversarial’ category, such as Malcolm X. [2] Finkerpearl sees these distinct positions in the history of social movements as key to understanding the modes of response to contemporary issues that we see today in the art world. He describes the adversarial approach as part of the genealogy for antagonistic practices like that of Santiago Sierra, while cooperative works such as Rick Lowe’s ‘Project Row Houses’ or Tania Brugeura’s ‘Immigrant Movement International’ find their roots in the exemplary.

For over 12 years I’ve worked as an artist in residence at Rialto Youth Project (RYP), creating long-term artistic enquiries building layers of individual and organisational relationships and coauthoring collaborative works. This work has clear roots on the side of the exemplary. But rather than create binaries of adversarial versus exemplary, antagonism versus cooperation, rupture versus healing, Finkerpearl argues that, like Brian, we should in fact be fighting the Romans, or whoever our common enemy is.

If we imagine the patriarchy, neo-liberalism or capitalism as common enemies that might unite many artists, then we could agree that a breakdown into micro discourses and debates over forms and approaches would be distracting from the broader fight against such mammoth forces. For example, for the last four years I’ve worked on a durational collaborative project, ‘Natural History of Hope’, exploring class and gender inequality across different generations of women. Therefore, I am part of a contemporary community of artists in Ireland who are preoccupied with related themes and who all engage people as a core feature of their work. From the Artists Repeal the Eighth and Waking the Feminists activist campaigns to the transnational In the Shadow of the State project, the recent controversial Maser mural that temporarily adorned the outer wall of Project Arts Centre and the participatory ‘77 Women’ project at Richmond Barracks.

All of these address common issues around patriarchy and collectively present a challenge to a common enemy. [3] However, in reality these art processes are each complex and multifaceted. Each one identifies and opposes different aspects of patriarchal systems. Furthermore they employ different forms, different modes of engagement and different timescales. The have different aims, different levels of endorsement from the art world, and different relationships with their constituencies as voluntary and involuntary participants, collaborators and spectators. Reducing them to one common fight poses the risk of sweeping over the complexity of their own power relations.

Instead, we can momentarily sidestep the history of social movements and simultaneously track back through the multiple genealogies of participation in the arts, such as Dadaism, Fluxus, the Feminist art movement or Relational Aesthetics. This way we can identify some specific features that place different approaches distinctly apart from each other and contribute to current debates related to their specific values and fault lines. [4] For example a close examination of the community arts movement of the 1970s – 1990s offers a deeper understanding of current debates on the instrumentalisation and gentrification of participatory art practices.

As Claire Bishop outlined at the ‘Creative Time Summit’ in 2011, participation has changed throughout history from the ‘crowd’ of the 1910s, to the ‘masses’ of the 20s, the ‘people’ of the 60s, the ‘excluded’ of the 80s, the ‘communities’ of 90s, to today’s ‘volunteers’. [5] In a recent essay that I co-wrote with sociologist Kevin Ryan examining my practice, Ryan highlights how the language of power was radically altered during the 1980s and 1990s, both in Ireland and the EC, and the effect of this on the community arts movement. [6] What had started out as a deeply political set of practices motivated by issues of ‘inequality’ and fights for ‘equality’, over time and through state involvement, became reframed using the language of ‘disadvantage’ and social ‘exclusion’. The remedy thus prescribed was social ‘inclusion’. Neo-liberal workfare regimes emerged and participation became scripted. Fights for equality were replaced by state supported processes aimed at ‘activating’ and ‘empowering’ ‘disadvantaged’ individuals and communities, the movement becoming increasingly controlled.

During this time, while youth work was being steered by policies with minimal focus on inequality, some organisations, including RYP, refused to endorse the depoliticised language in the state’s classification of Rialto as ‘disadvantaged’. Instead RYP adopted the defiant language of ‘oppression’ and ‘marginalisation’ while building a strong capacity for arts-based work committed to the exploration and representation of social issues. [7] My engagement with RYP from 2004 created a dialogue between legacies of community arts and contemporary critical discourses occupying the field of collaborative and socially engaged practice, especially as they related to power.

Cautious of becoming instrumentalised but deeply respectful of a history of community-based arts activity in Rialto, I worked to avoid what Grant Kester refers to as the “salvage” paradigm in which the artist takes on the task of “improving” the implicitly flawed subject. [8] Seeing the distinction between acting upon and acting with, [9] I invested in deeply collaborative structures and in the spirit of Ranciere’s ‘ignorant schoolmaster’, equality became a starting point rather than a destination of the work. [10]

The current ‘Natural History of Hope’ project has been focused on exploring and representing contemporary equality issues in women’s lives. It has brought together generations of women working and living in Rialto to engage over time in story gathering as well as a series of local events, meals, workshops, the development of a temporary school and three major public performances in the theatre space at Project Arts Centre in May 2016. [11] While a previous project exploring power with young people had quickly identified policing as a strong theme to pursue, ‘Natural History of Hope’ unveiled multiple overlapping realities of class and gender inequality. As a result the public performances involved a cast of 30 women representing this complexity, using lived experience and external analysis to speak back to multiple oppressive forces. Themes of class, death, the liability of men, gendered identity, lack of safe space, struggle for dignity and the ‘affective domain’ were interwoven into a landscape in which the protagonist, a mannequin called Hope, would attempt to survive and if possible to thrive. [12] Complex social themes could not be simplified here as they crashed against each other in a young woman’s path. The cast presented themselves as powerful women, yearning for something better for Hope. Presenting this work in a contemporary art venue during the centenary year, and in light of the Waking the Feminists campaign, created other lenses for the work and highlighted key questions around the power and representation of working class experience. [13]

In my practice I strive to bring together two forms of relational power, “one that articulates inequalities between those who exercise power and those who are subject to power and another whereby power is co-produced through collaboration”. [14] In that vein, this project has nurtured a strong collaborative power base and so, as with previous projects, it remains open ended in anticipation of future chapters. Although I’ve built up a distinct methodology, what is significant for me as an artist is that I’m not bound to any specific approach in moving forward. Future phases of ‘Natural History of Hope’ may adopt different approaches at different moments where necessary. What I do find myself eager to hold open is the complexity of life in the social world and similarly to keep alive the natural tensions that occur between various positions and complex approaches to making art with people. It’s in the richness of this complexity that new knowledge is produced.

Fiona Whelan is a Dublin-based artist and joint Coordinator of the MA Socially Engaged Art at NCAD.

[4] In Semester 1 of the MA Socially Engaged Art at NCAD, I coordinate a module mapping the multiple genealogies of socially engaged art practice, delivered by a diverse group of practitioners who each track a specific historical thread.

[11] Natural History of Hope was a live performance by Fiona Whelan, Rialto Youth Project and Brokentalkers, Project Arts Centre 12 – 14 May 2016.

[12] Professor Kathleen Lynch from Equality Studies in UCD acted as an advisor to the project and worked with us to identify these core themes from the research material.