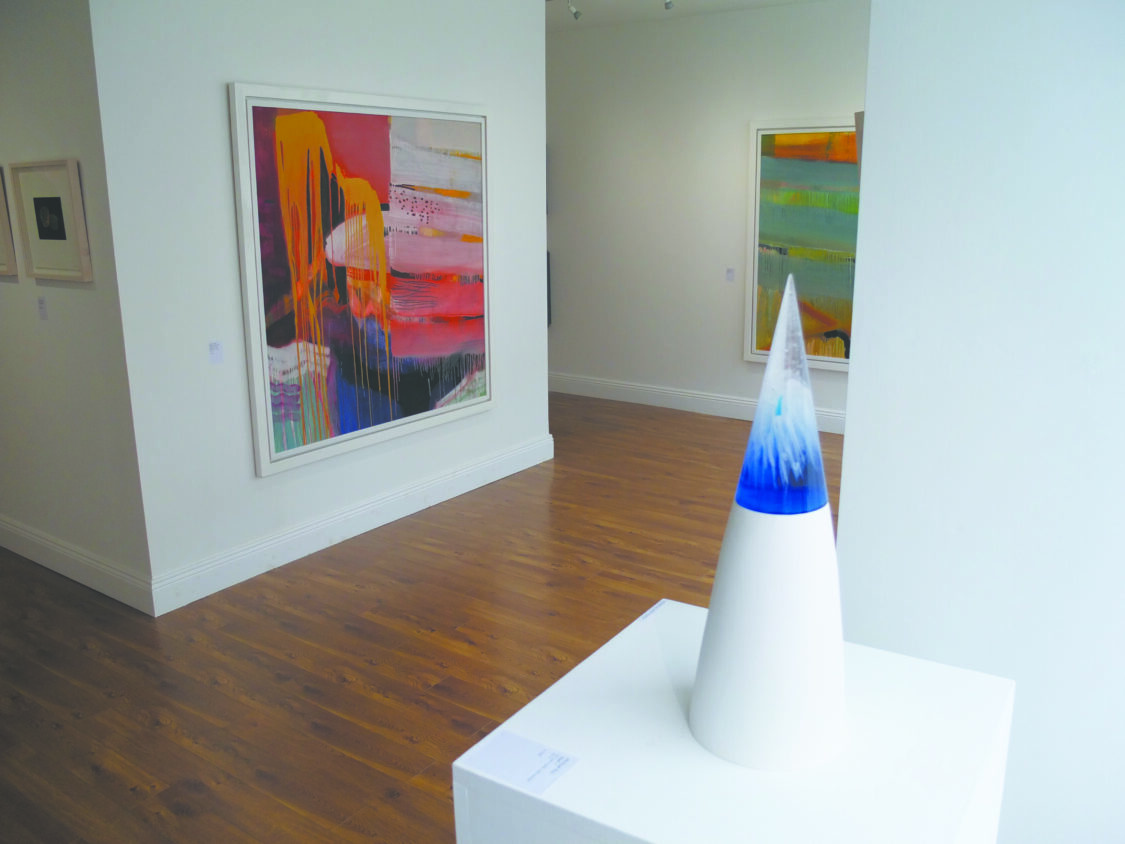 The stated aim of this group exhibition was to explore and interpret the idea and theme ‘Glow’, visually echoing the shift from late summer into autumn, whether experienced as a continuous radiant beam from a light source, the result of energy produced by vibrating electric colours or, contrastingly, through the gentle light of changing luminosity.

Eamon Colman’s two large oils on paper, Seeking refuge, the green earth turned towards the river and Morning swim by the Sultan’s tower introduce a strong warm presence at the front of the gallery with their swathes of expressionistic colour and addictive energy. Referencing landscape, they can be read equally as abstract gesture.

A similarly warm palette underpins Tom Climent’s paintings, The Heart Waits and The Heart Holds. However, the surface and paint treatment is denser and more textured, seeming to absorb light and forcing us to concentrate on the underlying structures depicted. Climent also holds back from precise definition of his subject, leaving the viewer to interpret his geometric, irregularly-patterned and subtly-coloured forms. The balance between representation and abstraction is cleverly construed. We could read these as town or mountain scapes, or as some other inner pictorial place, and it’s refreshing that it doesn’t really matter.

In William Crozier’s large carborundum print The Lure of Evening, the fading light bathes a hillside in dappled greys, dark blues and off-whites. The deep shadow of foreground foliage contrasts with the dusk light. It is strongly atmospheric and channels the theme with gentle luminosity. James McCreary’s prints in muted tones, October Moon and Autumn Leaves, draw us into his microscopically elegant treatment of glowing leaves floating on dark backgrounds.

Light is essential for Eilís O’Connell’s Deálan/Burning Coal, an irregularly-curved cast-resin object mounted at shoulder height on awall near a side window. Its smooth surface is infused with amber tones, like swirling galaxies trapped within. The quiet but strong presence of this work gave the fullest interpretation of the overall theme. The other sculptural piece, Michael Ray’s Melt 1, is a translucent ice-blue cone made from kiln-cast crystal. It is a cooler, more formal piece that works in more subtle ways.

Conor Walton shows two small realist still life works. An open pound of butter is exactly what you get in Butter. All rich yellow dairy substance and golden foil, it is a beautiful work which stands out among the various landscapes. Hanging above this, A Jug of Milk is more subtle, with a single white highlight on the surface of the jug. Walton’s third painting, Burning, depicts, in ochre-orange tones, a full-length male nude running and holding a flaming torch, its fire engulfing his head and upper body. While technically impressive, it seems startling and incongruous here, and a less subtle interpretation of the exhibition theme.

Initially, Peter Martin’s lighted stained-glass cityscapes in wooden frames might also seem out of place. Deep black borders give these works a strong filmic feel. Wrapped in Walls depict public housing and city landmarks brightly drawn against deep-coloured night skies populated with angry-looking clouds. The distant tower of Shandon Church situates us on Cork’s northside, a boarded-up shop beside some houses bringing forth a sense of social deprivation. There is character and strength in how this subject matter is worked through a medium which is usually used for more abstract or ethereal themes.

Finally, I returned more than once to Neil Greig’s three oil paintings, unable to quite pin them down in the context. Knockmanny, Kilvey Lake and Whitethorns offer robust depictions of a woodland, a lakeside and a rough hillside respectively. Lightly-dappled encaustic floats across the surfaces with gestural highlighting of grasses, reeds and leaves. Such an intense combination of effects is somewhat unfashionable these days. The painterly treatment is very different from the fluid expressionism of Colman or Crozier’s works, or the calm measured structures of Climent. While located in the Irish countryside, the locations depicted seem idealised. Knockmanny could be a woodland scene in warmer climes, while Kilvey Lake reminded me of a fast-flowing North American river scene. Several approaches to painting are combined with great technical flair and intensity. Despite the risks involved, the works are far from academic or staid, and their rich and varied palette is fresh and lively.

Curated by Maureen O’Sulllivan, this is a very reflective and intelligent selection of work, arranged to make best use of the bright, naturally-lit space. The challenge of demonstrating a consistent theme across a group show, without ascribing excessive meaning or interpretation, is well achieved.

Colm Desmond is an artist based in Dublin.