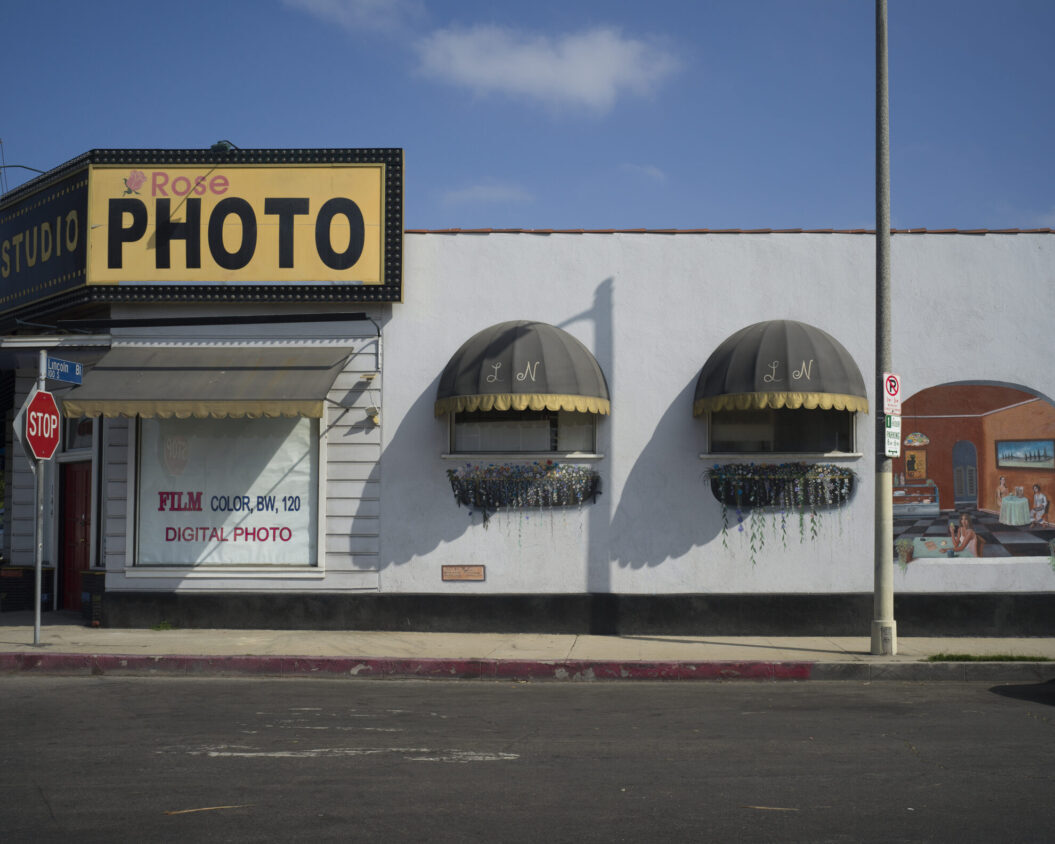 Photographs achieve their poignancy by freezing their subjects within a moment of time. “Time stood still”, we often say, when something stops us in our tracks. But time doesn’t stop. Time, as photographs remind us, is always running out. Eventually staged in May of this year, Fiona Hackett’s exhibition was deferred from September 2020, and this unscheduled hiatus seems to play into the meaning of the exhibition itself. What happened in those intervening months; the accretion of time on those sunny streets, the fixed smiles of her human subjects, already dead, drawn out beyond initial expectations.

Hackett presents an unusual coupling here: a set of framed photographs of Los Angeles streetscapes, and a series of obituary columns, enlarged and printed out from the pages of the Los Angeles Times. The buildings depicted also carry their own depictions, their walls painted with murals suggesting a glamour beyond their ordinary façades. The human subjects memorialised in LA’s historic newspaper are glamorised too, less in their grainy headshots, than in the words of the anonymous staff writers responsible for summing up their lives. “All photographs are memento mori”, Susan Sontag wrote.¹ Photography, memory and death seem naturally intertwined. Perhaps this unusual coupling is not so unusual, after all.

A large photograph, Untitled 4 (2020), shows a painting of Gary Cooper – though it could be someone else, since all the works are untitled – a giant figure holding a flight helmet and goggles, the orb of the moon framing him like an ancient halo. A pair of concrete kickers at the base of the painted wall suggest the mooring stations of a car park. But Gary won’t be stopping long; there are too many brave new worlds for him to conquer. Hackett’s photographs are relatively flat, her focus on façades resulting in the plane of interest being largely horizontal – the flatness of the prints themselves corresponding to the flatness of her scenes. This lack of photographed depth is complicated by the illusionistic depth in the painted murals, the photographer and the anonymous painters entangled within the illusionistic and the real.

Like American photographer Stephen Shore, Hackett likes to use street signs or telegraph poles as framing devices, her shallow depths of field punctuated by these vertical elements. This can also have the effect of making the scene appear like a passing frame. The largest photograph, Untitled 2 (2020), shows the façade of a white, single storey building, its roughly plastered wall hosting a black and white image of Sophia Loren. A former Miss Italy and Oscar winning actress, Loren combines the glamour and gravitas of an old-school star. Smouldering and chic, a no-parking sign frames her on the right, while on the verge in front, two real cactus plants anchor her image to terra firma, making gentle play with the painted textures of her unseasonable furs.

The show is arranged so the printed obituary columns and accompanying headshots are shown together in an irregular grid. There is no direct correspondence between the individual obituaries and the variously sized, framed streetscapes occupying the other walls. Instead, we get to think about them separately – the connections develop in our minds. Like the figures in the murals, all of these faithfully departed saw their manifest destinies in the Golden State. But Eden, to paraphrase Robert Frost, will always sink into grief.²

Timothy Howe died peacefully at home in 2014. Tim had been a surfer. He raised pigs. He loved cooking and Jazz. His obituary ends with how “his dark humour and insatiable love of women will be greatly missed.” Who provided these extraordinary details? Who believed his “insatiable love of women” is what counted? Or is that an example of his humour, a parting shot in the manner of Spike Milligan’s, “I told you I was sick”. Julie Payne ‘came of age’ in the company of Humphry Bogart and Doris Day. Later, she married the famous screenwriter, Robert Towne, before reconnecting with her high school sweetheart – a first love renewed for the end of time. In her portrait, Julie is breezily glamorous, her floppy fedora framing a pretty face with panda eyes. It could be a publicity still for a modern movie-star, but all it is now is the saddest kind of promotion.

John Graham is an artist based in Dublin. A book on his recent drawing practice, 20 Drawings, designed by Peter Maybury and with a text by Brian Fay, was published in June.