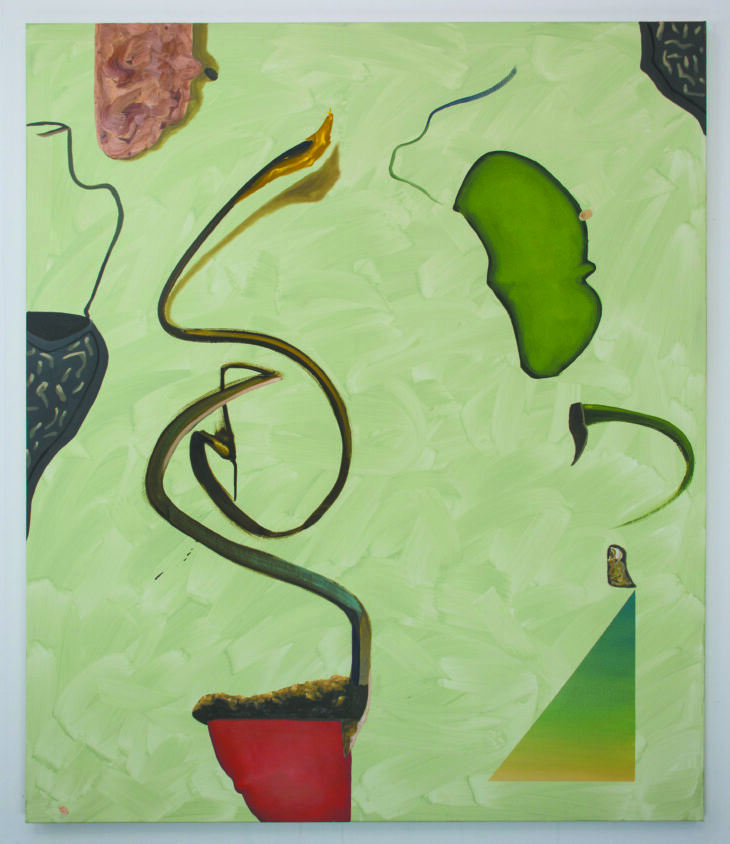 Painting, despite the implied immediacy of the title, doesn’t happen all at once. Between them, the nine gallery artists here – not all primarily painters – have been doing it for about 150 years. For the viewer, it can be a slow game too, that exclamatory ‘NOW’ perhaps better phrased as ‘now and then and again’. Currency aside, the more specific thing shared by this eclectic grouping is the room itself – a very large, overtly raw gallery space overlooking the rapidly changing landscape of Dublin’s Docklands. Ramon Kassam’s Gallery (2015) is a predominantly white acrylic painting on two unequally-sized linen panels. In black vinyl lettering near the top of the right-hand panel, the word ‘gallery’ appears. Below it, the artist’s name wraps around onto the left panel, in the distinctive style of the gallery logo. As the subject of the painting becomes the wall it hangs upon (so to speak), we’re reminded of how paintings can obscure reality, while feigning to show us things as they really are.

If Kassam’s painting is gallery-bound, Mark Joyce often breaks free of such contexts. Joyce’s work appears as painted panels in a Connecticut woodland (staged at the Albers Foundation in 2007) or as a series of coloured columns on a motorway interchange in south Dublin, Wave (2009). The Ballyconnell Colours (after Dermot Healy) (2017) consists of variously coloured bands on unprimed linen. Rainbow-like curves are painted and repainted, creating a kaleidoscopic effect, as though refracted through a series of second thoughts. Made with pure pigment, charcoal and animal fat, two drawings by Nigel Rolfe are the products of live performances in Poland and France. Like Kassam’s Gallery, their titles appear as pictorial content within the work, their respective phrases, Hide in Dark Corners (2017) and Democracy is Broken (2017), repeatedly drawn and erased. On the gallery’s concrete floor, an unlisted work consists of a sheet of paper with a black spiral motif. Objects around it – bowls of pigment, a measuring jug, a wrapped stick – testify to actions we might witness or conjure in our heads.

While John Cronin and Caroline McCarthy both make paintings with a certain wow factor, each artist brings a different approach to the act of painting itself. Reimagining everyday materials, McCarthy seems all about control, the verisimilitude of her painted tapes on canvas allied to a conceptual acuity. Her two small acrylic paintings, Bloom, Bloom and Cascade (both 2016) are remarkably accomplished. Cronin, in some respects, is about the loss of control, his liquid paint smeared and poured across vast, smooth surfaces. Cronin’s ZXX NO.13 (2016) is characteristic of his recent RHA show, its veils of oil paint arrested like a translucent screen-grab, or a blown up, microscopic slide.

Cronin’s title refers to anxieties around technologies of seeing. A short video work by Mary Fitzgerald is called Canthus (2016), a word denoting the corner of the eye, hinting at another kind of optical anxiety. Presented within a picture frame, a fixed shot of a misty headland gradually dissolves and reconstitutes. First shown at the Crawford Gallery in the company of paintings by Paul Henry, it seems out of place here, its play of correspondence lost in this setting. Several of these artists have been showing with Green on Red since its halcyon days in Fitzwilliam Square. Fergus Martin’s paintings often looked their best there, the Georgian rooms a perfect foil for the naked exactitude of his painted oblongs. Untitled (2017) is almost three metres long, but only 41 centimetres high. On a fabricated aluminium panel, a silvery-grey area extends across the lower section and upwards at both ends to configure an elongated ‘u’. The work has a machined perfection, but I prefer his paintings on canvas. The unyielding metal support is like armour on skin: invulnerable but less seductive.

A two-part mural, Kavalier and Clay, was first presented in ‘Just Left of Copernicus’, Niamh McCann’s solo show at VISUAL, Carlow, in 2015. An Aer Lingus air hostess – like a figure from a Soviet propaganda poster – is emblematic of brighter horizons, but as the paint she’s made from drips down the wall, her sangfroid is quietly undone. On an adjacent wall, a more bamboozling figure rests, hooded, vaguely labial, transforming into a fish or a snake. Named after Michel Chabon’s 2000 novel The Amazing Adventures of Kavalier and Clay, McCann’s habit of conflating narratives is not always easy to follow. Damien Flood is also inscrutable at times. The billowing shapes and bird-like forms of Avery (2017) drift across the shallow space of the canvas, opening up here and there, to a background of tumbling ovoids. Reminiscent of Joan Miro, an adroit juggling of the material and the illusionistic adds a surprising physicality to Flood’s laconic surrealism. In his second painting, a hard-edged triangle plays against softer forms. Suggesting cultivated difference, the title, Anomaly Garden (2017), might serve as well for the show overall.