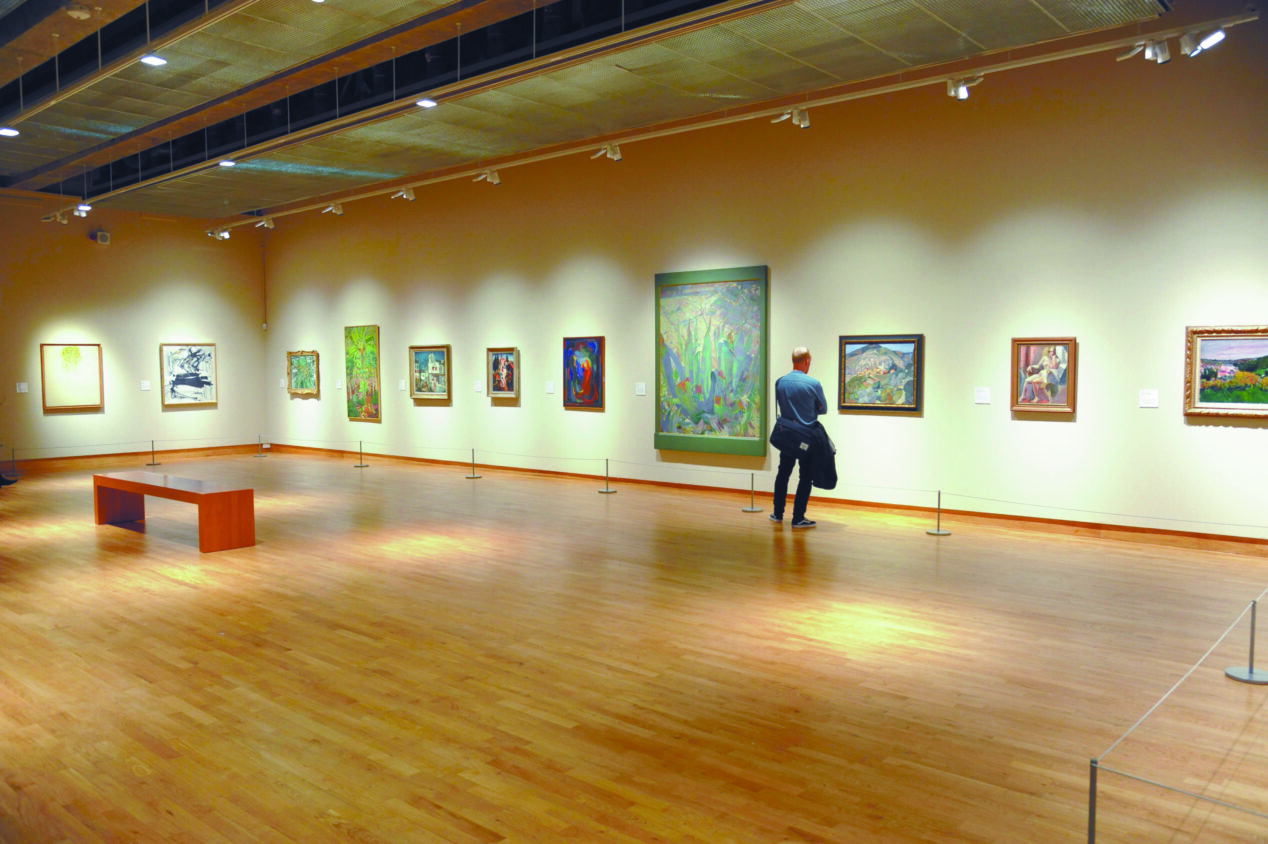 There’s an implicit understanding of the museum’s finite resources and loaded remit when viewing a permanent collection show. The limited pool from which these exhibitions are curated often leads to a loose circle being drawn around the works, its content used to simultaneously demonstrate and educate. It becomes a balance of signposting and illustrating, where singular artworks are laden with significance, denoting the development of an artist’s full career or even those of their peers. When seen repeatedly in different configurations, pieces can easily be experienced as historical artefacts rather than artworks.

The spectrum of contact an audience will have with a permanent collection is huge, yet heightened exposure to works does no favours for broad exhibition making. The influence of international art and modernism on Irish work is such an all-encompassing premise that I struggled to experience this exhibition distinctly from past and even surrounding shows. If previously unseen by a viewer, it would still be difficult for 31 works to ‘fulfil’ the vast reach of the exhibition’s title. Instead they become like stills representative of an unknown, feature-length film: not demonstrative but signalling something that could be more thoroughly explored, should you be so inclined.

The exhibition is loosely organised both chronologically and thematically, with each work contextualised by a short text. This format often connects the paintings with artistic influences, perhaps a fellow artist who is more widely known than the one presented. Some blurbs are repeated across more than one artwork, some not; others feature trivia that’s irrelevant. In trying to strike a balance between justifying the placement of works and highlighting important connections for the uninitiated, the effect is focused for some clearly key artists, but is listless in places. It abandons continuity – perhaps rightly – and places many of the works at the edges of various historical art movements.

The first space showcases artistic departures from figuration and landscape into Cubism, Impressionism and Fauvism, most prominently by Mainie Jellett in Seated Female Nude and Abstract, and Roderic O’Conor in View of Pont-Aven and Field of Corn, Pont-Aven. This selection is punctuated by some of Jellett’s more abstract paintings, with the volume of work allowing for some cross-comparison within her wider practice, and, to a lesser extent, that of O’Conor. A Cubist influence segues further into Patrick Swift’s Postiano, Mary Swanzy’s Samoan Scene and William Scott’s Aloes, where modernism’s freedom from strict representation shows the joy and alien brightness of botanical scenes.

On the other side of the gallery, William Scott’s Brown Still life and Antoni Tapies’s Peinture Verte counterbalance the explosive forms and colours of these tropical works. Yet they are visually echoed in Patrick Scott’s Yellow Device – painted in 1962 in protest at the testing of nuclear bombs – where paint is dripped on raw canvas in the colour field tradition. This painting is an example of how a limited permanent collection can find contemporary relevance through its own historiographic process of being housed in a museum environment. It’s a work that, through its political basis, shows more potently a passage through the chronology of this collection, and a ‘defanging’ that occurs in pictorialisation. The painting itself (and now its content) has become normalised – a marker for where history repeats itself. This process is echoed in Michael Farrell’s Presse Series with Cream. Palestinian flag colours are put through a juicer in a weirdly glib, pop-like abstraction, producing a reduction of then-current (and recurrent) politics.

Yellow Device marks an abandonment of mini-demonstrations of career-arcs and personal relationships between artists, and into singular American colour field and then place-based work. The latter is seen in Sean Scully’s painting Fourth Layer, Tooley Street, G.L. Gabriel’s S-Bahnhof Friendrichstrasse and Willie Doherty’s Apparatus. Unfortunately this isn’t capitalised, especially Doherty’s photographic works, deadening the alienation within them. Morris Louis’s Golden Age and Kenneth Noland’s Crystal show a process of object making that assimilates paint and canvas. They also offer colour field connections with William McKeown’s Untitled (2005), which is based on morning light, seemingly the crossover point of these themes. This particular painting’s abstracted and unfamiliar coolness of place is a deft counterpoint to the warmth underpinning the foreign scenes in the first room.

Yet, while the exhibition commences by showcasing a forward-thinking art collection in the mid twentieth century, it gradually trails off. It finishes with the recent acquisition of I Overslept Until the Evening by Makiko Kudo. Under the exhibition theme, this work by a Japanese artist could be perceived as an aposiopesis on future Irish art influences, or a general loosening of influence to embrace introspection and alternative avenues of pop culture. As a whole, ‘International Ireland’ does what it sets out to: it ‘showcases’, yet its broad parameters seem self-defeating. However, certain artworks offer glimpses into how a more forthright use of the history-making function of museum collecting might offer a heightened sense of urgency for new and familiar artwork – and visitors – alike.