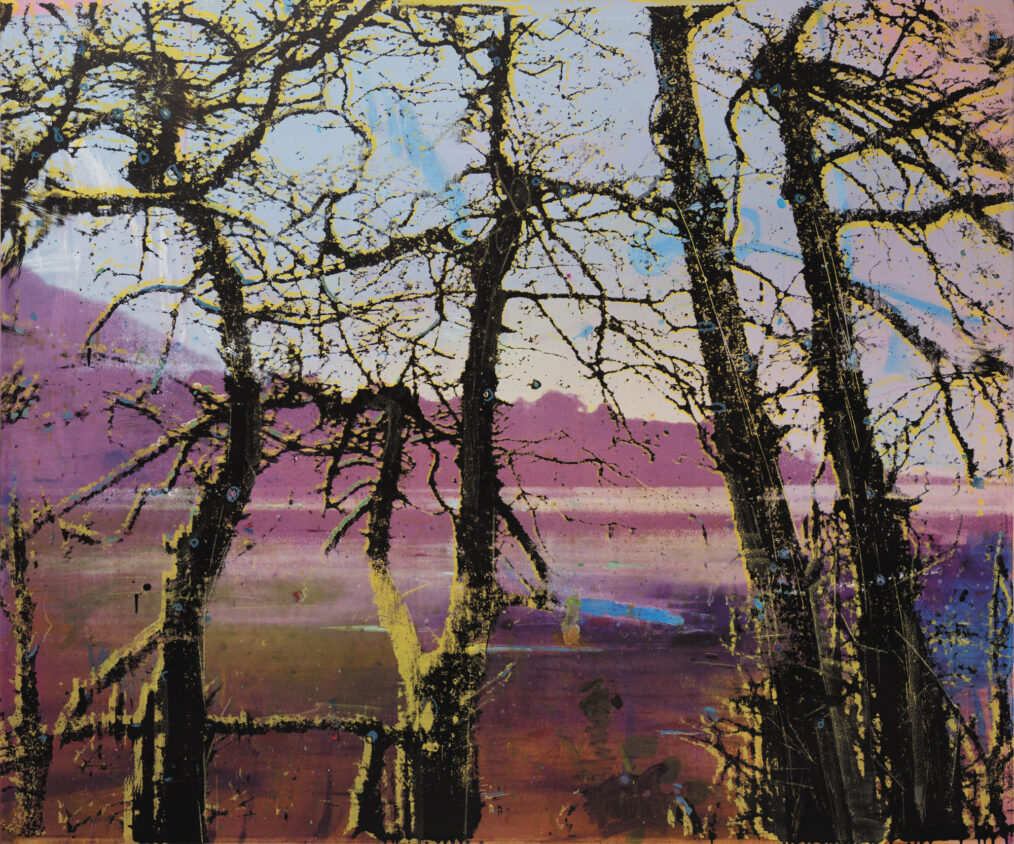 Joanne Laws: Can you describe your studio setting and your painting routine?

Elizabeth Magill: My studio is in a complex with other artists run by the organisation ACME in East London. It’s a 700-square-foot white cube with light coming in from the south and looking onto Mill Row, a narrow one-way street shadowed by a four-storey brown brick and grey concrete block of council flats, built in the 1970s. I’ve been here for a long time, so I’m used to this view. I like its low-level visual interference. I also have a smaller workspace on the Antrim coast, but when I’m there, I just seem to stare at the beautiful views overlooking the sea. My routine is intermittent, as I am often running around doing other things. I’ve had more condensed studio periods in the past, when I’d work for at least six days a week, sometimes working all day and into the night, but this isn’t me anymore.

JL: I read somewhere that you don’t necessarily refer to yourself as a landscape painter and yet a lifelong commitment to landscape is evident in your work. What national landscapes do you tend to draw on, if any?

EM: I’m preoccupied with the genre of landscape as a way to explore the language of art, the possibilities of painting and ideas around personal biography. For me it seems to offer a space to try to think about the bigger picture and what it means to be a part of this world. The landscape that enters into my work mostly comes from the geographic features around the Glens of Antrim where I grew up. This seems to have provided me with some kind of a visual backdrop. This particular corner of Ireland is scenically quite beautiful but the history there often seems at odds, or in conflict, with this natural beauty. The late, great John Berger, in his last publication, Landscapes: John Berger on Art, wrote: “Sometimes a landscape seems less a setting for the life of its inhabitants than a curtain behind which their struggles, achievements and accidents take place… landmarks are no longer only geographical but also biographical and personal”.

JL: Which aspects of the traditional landscape-painting canon interest you most?

EM: There are many artists that I admire who specifically fall into this more ‘traditional’ category of landscape painting. To name a few I’d include Van Gogh, Cezanne, Turner, Courbet, Munch, Balka, Constable, Whistler, Corot and many nineteenth-century Russian artists, especially Levitan. I also really like the landscape paintings of Kurt Schwitters, when he lived in rural Norway after fleeing Nazi Germany. Contemporary artists I like whose paintings also embody landscape include Per Kirkeby, Gerhard Richter, Ed Ruscha, Richard Long, Peter Doig and Chris Ofili, perhaps Keifer’s early works, Mamma Andersson and Neo Rauch. But I’m just as interested in photographers, especially Annelies Strba, Thomas Struth and some Victorians such as Henry Peach Robinson, Oscar Gustave Rejlander, and Clementina Hawarden.

JL: Literature, particularly Irish literature, is an art form that has grappled with the complexities of landscape over time. Does this influence your work at all?

EM: With my photographic and printing interests, and my use of several different mediums, I try to create a sense of hybridity in my work, so it can’t be easily contained in one discourse. Experimental modernist Irish writers Beckett and Joyce have hugely influenced my thinking with their incredible talent for holding onto the structure of their stories whilst seemingly throwing them up in the air. It’s this confidence with language, mixed with a healthy disregard and a love of the medium, that I try to emulate. Other books that have enriched my thinking, especially in relation to landscape, could be described as semi-wanderings or journalistic observations.

I Crossed the Minch by Louis MacNeice was a commissioned travel book he undertook in the spring and summer of 1937 when visiting the Western Isles of Scotland. It turned out to be a kind of irreverent jaunt. However, contrasting the physical and emotional difficulties MacNeice encountered, he concludes his book with an incredibly moving poem, On Those Islands, which transforms the harshness he experienced into a profound portrayal of a people and their all-but-vanished culture at the water’s edge. Simon Schama’s Landscape and Memory, Roger Deakin’s Wildwood: A Journey Through Trees and The Rings of Saturn by W.G. Sebald also relate to travel, both geographic and of the mind. I also enjoyed Joseph Conrad’s Heart of Darkness, Truman Capotes’s In Cold Blood, J.M. Coetzee’s In the Heart of the Country, Flannery O’Connor’s, Wise Blood and Adam Nicholson’s, Sea Room. I like the way these writers create a strong sense of place, evocatively but firmly rooting the reader in another world. JL: For me, your landscape paintings often feature startling, unnatural or even supernatural elements: an ominous glow, an implied explosion or stray components such as a synthetically-coloured tree. Is there a sense that you are trying to subvert or break away from the tranquillity (and historical baggage) of the pastoral scene?

EM: The startling or supernatural elements you refer to may just be a signature of temperament. I’m not sure. I guess I’m attracted to contrasting elements and pivotal times of day, like dawn or dusk, where one could easily tip into the other; the darkness threatening to consume the light, or vice versa. For me this sets up some sort of visual friction or the potential for events to unfold. It seems to me that, as night falls, the sky can often appear so bright, in stark contrast with the darkness of the land. It’s always a real struggle for me to bring my work into a place that fully resonates with how I feel, think and interpret the world. I try to create a percussion of different elements that coexist. I like the finished work to somehow appear open to possibility, but finite too.

JL: There is an almost batique-like quality to some of your recent paintings, with the surfaces resembling cracked wax, while other works employ printmaking processes. As a painter, how do you approach surface?

EM: The surface of the work is something that can hold visual attention and perhaps meaning. The texture is a fully integrated part of the painting and yet a separate thing in itself. It is achieved through a build-up of diluted oil paint and mark-making, often over many months, sometimes years, until I reach a sense of place or something semi-believable to continue working with. The canvas never feels complete until this surface quality becomes a visual entity in itself. With recent works, I’ve created another type of surface by using silkscreen printing on top of the painted canvas. With this introduction, I’ve found direct ways to incorporate my photographs into the painted area. This in turn sets up a dialogue between painting and the photographic image or blurs the boundary between the two genres.

JL: Architecture and figures are rarely depicted in your landscapes. Is this a deliberate focus on the awe-inspiring vastness of nature beyond a more humanised scale?

EM: Although my work is perceived as uninhabited, figures and buildings often appear. I try to work with these elements in such a way that they don’t become too dominant a feature. I find that if a manmade structure or figure is the main focus of attention, the overall work can be compromised, with the landscape becoming secondary or a backdrop for some implied narrative. However, a number of years ago I visited the studio buildings that Henry Moore had built in the village of Much Hadham, in Hertfordshire, England, known locally as ‘Hogsland’. I find studios are like centres where thoughts and art can form internally. Perhaps inside an artist’s head, there’s a ‘studio’ of thoughts going on all the time. In 2016, I completed a painting titled Hogsland, placing the structure of Moore’s studio building at the centre of my canvas like a hub of ideas. This train of thought also had some influence with the title of my upcoming touring exhibition ‘Headland’. Headland is a geographical landmark (often seen from a distance) that, for me, also represents the mental processes that go on in one’s mind.

Elizabeth Magill was born in Canada, raised in the North of Ireland and lives in London. She is represented by Anthony Wilkinson, London, and the Kerlin Gallery, Dublin.

Magill’s solo exhibition, ‘Headland’, is curated and toured by Limerick City Gallery of Art (LCGA) in partnership the RHA, Dublin, and the Ulster Museum, Belfast. The project has been supported through the Arts Council’s Touring and Dissemination of Work Scheme. The exhibition will launch at LCGA on 8 September 2017, with an introduction by Dr. Barbara Dawson, Director of the Hugh Lane Gallery, Dublin. The exhibition will subsequently be presented at the RHA from 18 January 2018 and the Ulster Museum from May 2018 onward. The artist will be in conversation with Stephen Snoddy on Saturday 9 September at 12 noon in LCGA.