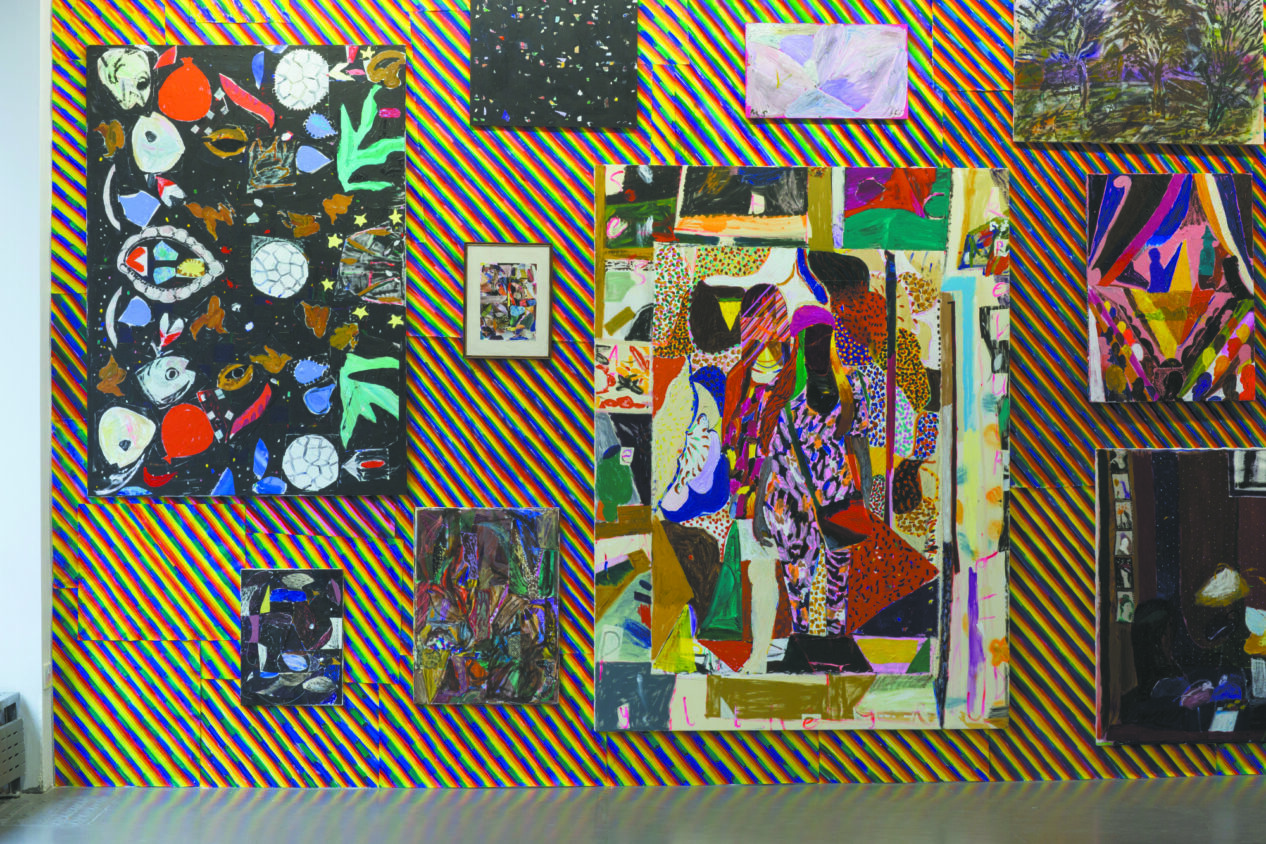 The American street photographer Gary Winogrand said of his work: “I photograph to see what the world looks like in a photograph”. I thought of Winogrand and of this quote when visiting Mark Swords’s exhibition, ‘The Living and the Dead’, at Temple Bar Gallery and Studios (TBG + S), as it could be said that Swords paints pictures to see what his world looks like through painting. Swords uses his everyday life as his inspiration for the show. The paintings are about things that surround him, “things that are consciously or unconsciously always present”.  Drawing on daily observations, he collects images of bric-a-brac from charity shops, his young daughter’s toys and drawings, as well as the objects and paraphernalia that surround him in the studio. All these elements are utilised in a playful manner and are presented as two large wall pieces that contain myriad visual ideas and painting approaches. These wall pieces are held together through his use of a wallpaper-style striped background on one wall and large black painted sheets on the other.

The work operates extremely well in the gallery space. Two large assembled painting pieces draw the viewer in to examine their individual elements, perhaps in the way that one might pick through a charity shop, searching for little gems. The individual paintings are equally engaging, with a theatrical motif running through the works. Stages, sets and costumes are all referenced in the paintings. Much like theatre, the show itself is an immersive experience. According to Swords, the installation should be a place that brings elements together – narrative, colour and pattern – and where “everything becomes a play”.

There is great attention given by Swords to pattern and pattern-making within the work. Echoes of Matisse can be seen in these paintings, yet it could be argued that the work challenges one of Matisse’s aesthetic positions: that “a work of art must be harmonious in its entirety”. In Swords’s work, composition and pattern-making are often in conflict with each other. One such example is Stock Required Urgently Please, a painting within a painting surrounded by other paintings. It creates a visual cacophony, an excess of pattern and design which is complimented by the more muted works on show. In these works, colour is redacted in a similar manner to the text pieces that he writes and then paints out.

The assemblage of the paintings within the tableau seems carefully considered. I wonder if Swords might have purposefully blacked out paintings as he went, in order to make them fit within the assemblage? If so, it was a fruitful exercise in considering the function of a painting within the larger scheme of an exhibition. The salon hang also avoids any obvious hierarchy among the paintings. The viewer can engage with the work from any position, while a connecting narrative is alluded to between the paintings.

The paintings could be described as ‘faux naïve’, a style that has trended for a number of years largely through a resurgence of interest in the work of artists such as Forrest Bess and Etel Edan. It can be also seen in the work of Tal R and other international artists. The aesthetics of Outsider Art and its impact can be observed among the work emerging from art colleges of late as well. Arguably, its popularity can be understood through its apparent ease of construction. However, Swords has a naturally elegant touch with paint, which indicates the depth of his skill with a material that not everyone can handle as effectively as he can.

The work asks the viewer to consider how we might see our everyday lives, how the smallest of incidents or observations can gain significance. The world that is conjured is one that acknowledges the fleeting nature of time. He creates a childlike view of an adult world. One particular painting, Family Magic Show, seems charged with this view. The magician waves from the depths of a child’s imagination, now carefully captured through the eye of the adult artist. The quality of children’s drawings, imbued as they are with a sense of joy and freedom, are also captured in the large painting Tapestry, where a child’s fantasy is played out complete with superman and glittery fairy costumes.

The exhibition title ‘The Living and The Dead’ makes reference to James Joyce’s story The Dead, but another writer that springs to mind when viewing Swords’s work is Seamus Heaney, in particular his book The Human Chain, in which he reflects on the fleeting moments that shape our lives and our connections to each other: “A letting go which will not come again”. The title seems apt when one considers the everyday subject matter that Swords draws on to create narratives within the work. It reminds us that we are in a constant dialogue with our surroundings and that they continually confirm our existence in the world.

Alison Pilkington is an artist who lives and works in Dublin.