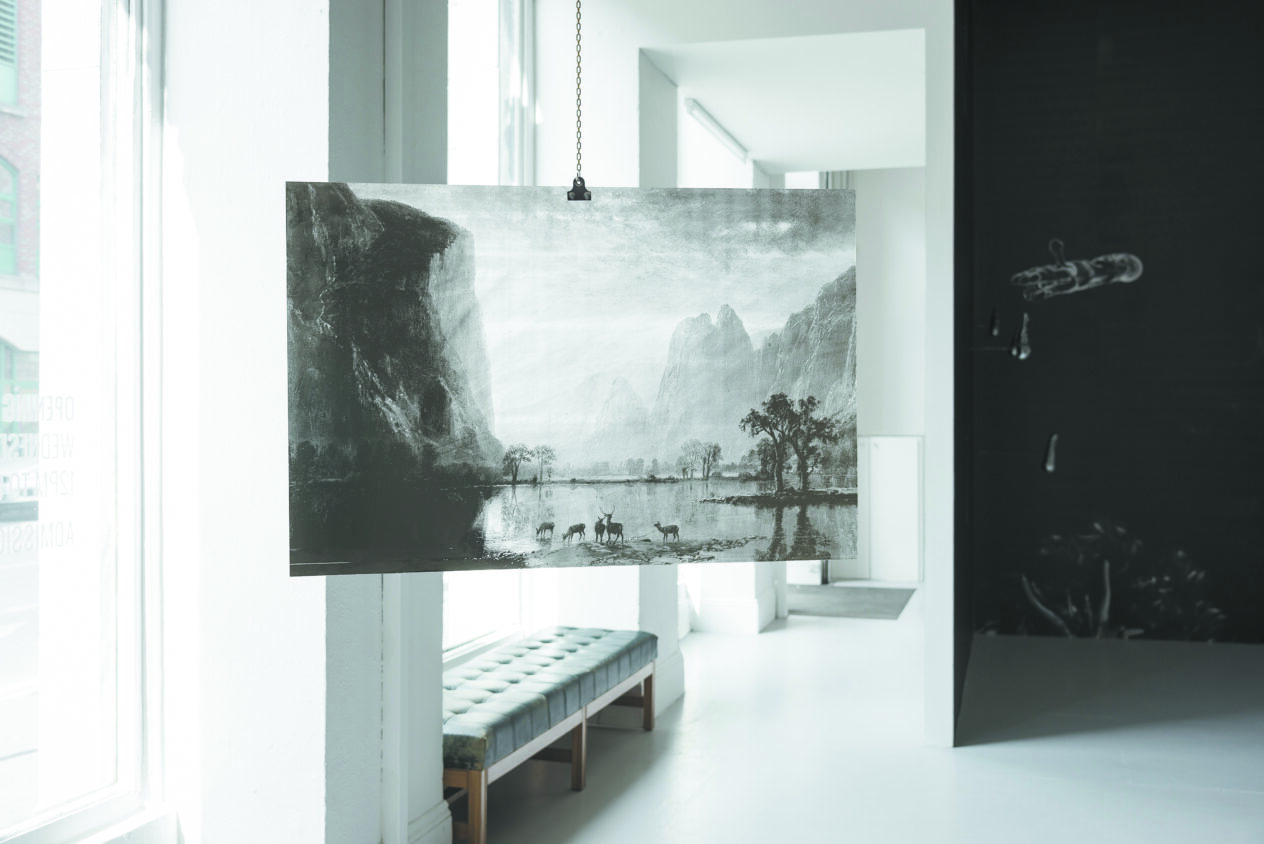 LIKE many curators (and indeed, artists) we often develop ideas by thinking through references or historical incidences that have little to do with contemporary art from the outset. ‘Scissors Cut Paper Wrap Stone’ is a case in point: an exhibition that developed from our discovery of a science fiction novel written in 1994 by author Ian McDonald. The novel led us to understand a rich history of sci-fi produced in Northern Ireland, of which Ian McDonald is a part. He is one in a long line of authors dating back to the late nineteenth century that obviously coincided with considerable political, industrial and cultural change over the intervening years. Given the region’s difficult past (and equally uncertain future), it makes sense that a history of science fiction literature exists in Northern Ireland. With its characteristic conjuring of alternative worlds, new life-forms and imaginative re-workings of everyday life, science fiction might be described as an act of ‘cognitive estrangement’ that allows us to re-approach the conditions of our society.

McDonald’s novel Scissors Cut Paper Wrap Stone tells the story of a young student, Ethan Ring, who develops the ability to produce images that bypass rational thought and control the mind of the viewer. The book alternates between scenes of Ethan’s pilgrimage through Japan as he tries to reconcile the responsibilities of his unique brand of power, and scenes of Ethan’s earlier life as an art college student in “some rainy-day city in the North”. As the book proceeds through Ethan’s time in college, it details his encounters with other students that share an interest in artificial intelligence, including his girlfriend Luka, who introduces him to a virtual reality visualiser that is channelled through the work of Italian Futurist Umberto Boccioni. Stimulated by conversation and experimentation, Ethan develops a technology of “fracters” – mind-controlling images that have the power to heal, cause pain and induce tears or ecstasy. The utopian promise of the image technology is short lived as Ethan finds himself blackmailed into employment by the public relations department of the “European Common Security Secretariat”, who demand that he uses these fracters for the purposes of interrogation and assassination. It’s a complex story that is difficult to summarise. The book is packed with ideas, allusions and observations that are typical of the cyber punk sub-genre of science fiction. What struck us about the novel was the central idea of an image technology that could go beyond mediation, interpretation and criticality – the very things that comprise our modern framework of cultural experience and understanding of contemporary art. The French philosopher Jean-François Lyotard wrote that “art harbours within it an excess, a rapture, a potential of associations that overflows all the determinations of its reception and production”. In other words, something antithetical to theory that makes the experience of art different from the experience of other kinds of objects. McDonald’s story provides an expansion of similar ideas.

The notion of Ethan Ring’s powerful image-technology also allowed us to think about how art is often instrumentalised and laden with promises of ‘impacting’ audiences. As a result of the funding language around the public benefits of artistic presentation, we have become used to the rationale, but McDonald’s story accelerates the basic question: what if art actually did impact people so directly that encountering an image could cause viewers to change their mindset or improve their wellbeing? It prompts further questions about the responsibilities and corruption potential of developing such an effective (and affective) form of artistic power, while also suggesting what is necessary and important in the failure of art to manifest these kinds of results for audiences, viewers and publics.

The ideas and evocations that we drew from McDonald’s novel provided a way of framing questions of technology, authority and the physical body that were in evidence in many of the artistic practices we were encountering at the time. It was on this basis that we began to approach Alan Butler (Ireland), Clawson and Ward (UK), Eva Fàbregas (Spain/UK), Pakui Hardware (Germany/Lithuania), Joey Holder (UK), Jennifer Mehigan (Ireland), John Russell (UK) and Andrew Norman Wilson (US), with a view to developing an exhibition that responds to this science fiction story of mind-controlling images. All of the artists demonstrate a commitment to these shared concerns in various ways, for example in the sculptures by artist duo Pakui Hardware (Neringa Cerniauskaite and Ugnius Gelguda), which use fleshy imagery from NASA archives, and in the work of Clawson and Ward (Anna Clawson and Nicole Ward) that references Josef Stalin and the censorship of his own portrait. The body appears throughout the exhibition in various guises and is subject to forms of control and imposition. In John Russell’s large-scale, backlit prints, he presents scenarios where a motley crew of hybrid creatures seem to be playing out the mysterious social rituals of a fledgling multi-species society that has been glitched with technology. The evocative titles of these works (Diagonal Slaughter Optimisation, Parallel Domination Facility, Adjacent Bureaucracy Enhancement) add the suggestion of a threatening and administrative condition to each of these scenes. In Eva Fàbregas’s work, The role of unintended consequences (Sofa Compact), we see the animated character of self-assembly furniture, as though encouraging the furniture’s autonomous life and liberating it from the burden of human labours. In this work there’s a sense that animism (the attribution of life to inanimate objects) has come to replace the primacy of the human body. A similar sense of attribution relates to Andrew Norman Wilson’s discombobulated ego puppet in Reality Models, and extends to Fàbregas’s Self-Organising Systems, a series of robotic artworks made of recycled product packaging that appear to navigate the gallery through their own self-determining movement. These examples are not exhaustive, but they do indicate the ways in which the exhibition ‘Scissors Cut Paper Wrap Stone’ offers room for different propositions of art’s relation to the human body, accelerated by technologies of affective power and domination.

We used the opportunity of touring the exhibition to Uillinn: West Cork Art Centre, Skibbereen, and Ormston House, Limerick, to include other artists (Jennifer Mehigan and Joey Holder respectively) whose practices are similarly engaged in imagining the physical future. The tour also enabled us to develop a presentation that was responsive to the architecture and scale of each space. The spilt level spaces at Uillinn meant that the encounter with the individual works in the exhibition was organised in a more narrative way, requiring audiences to navigate through certain artworks in order to access others. In its current iteration at Ormston House, the exhibition has the opposite effect, with many of the works visibly and physically encroaching on each other within the same space, disrupting any clear sense of linearity in the audience’s encounter.

Having produced three versions of the exhibition at this stage, we realise that there is no definitive version. Each exhibition behaves differently, and we try and keep ourselves open and learn from the process.

‘Scissors Cut Paper Wrap Stone’ continues at Ormston House until 27 May 2017. Alissa Kleist is Curator (Exhibitions) at CCA Derry-Londonderry. Matt Packer is currently Director at CCA. He will commence a new role in June 2017 as Director of EVA International. He is also Curator of this year’s TULCA Festival of Visual Arts (3 – 19 November 2017).