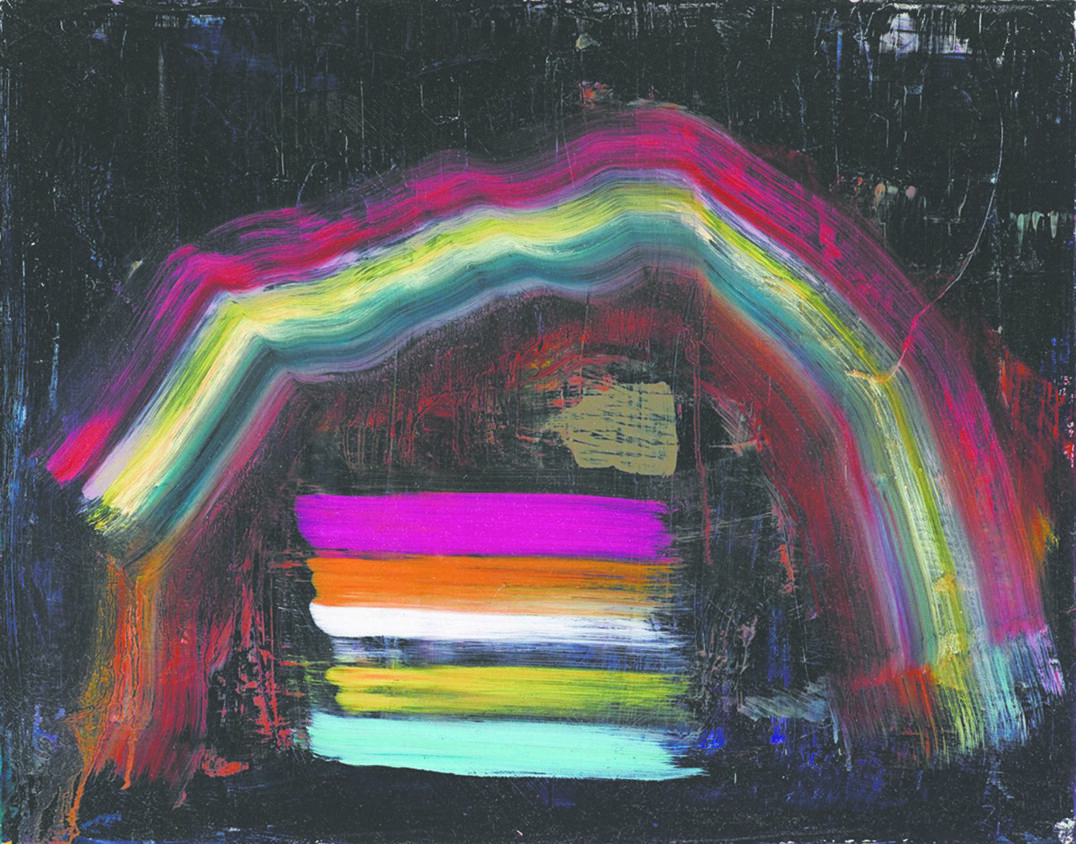 Let me begin by confessing something: over the course of the last two years, I have interviewed Diana Copperwhite twice on camera. During those conversations, we barely touched upon the formalist ‘whats?’ of her paintings in an effort to avoid muddy dialogue. The filmed conversations were more centred around the general ‘whys?’ of painting and the painter, the nature and nurture of it all; painting as a verb rather than a noun.

When I was asked to write a review of Copperwhite’s solo show, ‘Crooked Orbit’, at Kevin Kavanagh Gallery – which meant confronting the ‘whats?’ head on – I tossed and turned before accepting the invitation. What I discovered was that knowing the ‘whys?’ can colour your vision. But before we go there, first a description. (Note: I will not be doing an obligatory round-robin description of each and every painting in the gallery because when you describe one of Copperwhite’s paintings, you describe them all. Sounds harsh – a premature critique before the window dressing – but this is the case for most solo presentations of painting that lean on the side of abstraction. Painting like this defeats description).

Composed of around 10 paintings, ranging in scale from medium-sized to quite large (in Irish-painting-scale terms), the initial impression of Copperwhite’s new body of work is that there is little variation in application, tone, form and composition from one painting to the next. Like the way someone who is tone deaf to the nuances of ‘diddley-eye music’ might say: “It all sounds the same to me!” But such a musical analogy is not wasted here.

Like Mondrian’s jazz-inspired Broadway Boogie Woogie (1943) or Kandinsky’s use of ‘compositions’, ‘impressions’ and ‘improvisations’ to title his paintings, Copperwhite also waxes lyrical with musical adjectives like ‘discordant’ and ‘harmony’ when describing the tensions and contrasts inherent in her paintings. But music is music and painting is painting, and when we discuss discordance and harmony in terms of antonyms, painting is not in the same unforgiving register as music. The visual register is more subjective, while noise is… just noise.

I notice straight away at Kevin Kavanagh that there’s no sign of Copperwhite’s signature paint-slapped portraits – those featureless faces of hers that I have gravitated towards in past solo shows as a stabilising visual anchor. Feeling ‘scrooged’ by their absence pushes me to search out some other orientating subject hiding under the fat duvets of Copperwhite’s corrective abstraction. But everything here is lost in suggestion, like mauled figures lying in post-coital beds. Everything is Ibid. So, I call upon some referential history to orient myself. If the orbit were straight, it’d be boring.

Broadly speaking, Copperwhite’s paintings augment postwar European and American painting and drawing. In her handling, however, the existentialism, expressionism and machismo of postwar famine-figuration, by, let’s say artists like Alberto Giacometti and Edward Hopper, have got all fat and luminous. Copperwhite’s figures aren’t collectively alone in a diner in Manhattan drinking coffee à la Hopper’s Nighthawks (1942), or chiseled away to a nub of unmovable humanity in the manner of Giacometti. Copperwhite’s figuration pushes against wads of paint like a knuckle sandwich pressed against a pinscreen toy.

Virtuoso Romanian painter Adrian Ghenie comes to mind as a contemporary peer, but while Copperwhite is a miser of figurative detail and a miner of intuitive judgments, Ghenie provides a little more muscle and bone for our viewing pleasure. Copperwhite’s architectures cower under a deluge of colourful greys; her tubular spectrums and bundles of neon are smothered in a miasma of grey indecision and uncertainty, looking like New Politics.

Although there’s enough of those rocket thrusters of atomic tangerine and Nighthawks green neon to soak up at Kevin Kavanagh, sometimes I think there’s too much chance and intuition and not enough precision and control in Copperwhite’s approach (that’s why I believe the artist’s incisive paint-slapped portraits are an essential element in a solo presentation of her work).

The title of the exhibition forces a double-take on the ground below and the sky above – our place between. And then to daydream: I am a kid again, hovering in wonder above the planetary system colourfully illustrated in some smelly encyclopedia of yore, and imagining what it looks and feels like beyond the Great Red Spot on Jupiter. But Copperwhite’s paintings – although still indebted to a deep sense of wonder – are closer to the floor, closer to home, closer to the self.

On film, Copperwhite described a first memory in which she is reaching for a bundle of highlighters and her father blocks her approach. She then described what she perceived as an oppressive grey environment in contrast to the out-of-reach luminosity of the highlighters. Look familiar?

James Merrigan is an artist and art critic based in Waterford City. His film All or Nothing is also profiled in this issue of the VAN.