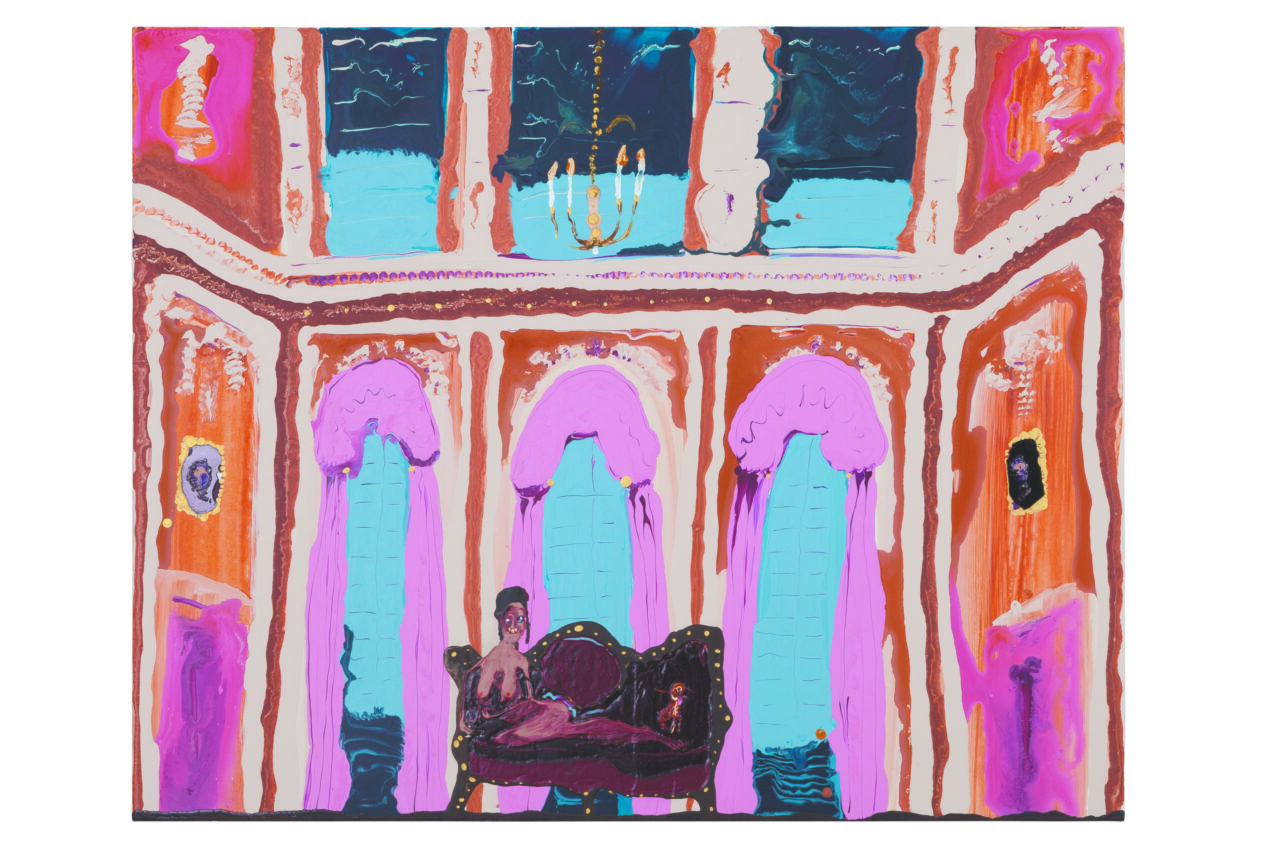 When J.K. Huysmans’s Á Rebours (Against Nature) was published in 1884, it was embraced immediately as epitomising the decadent movement in art and literature. The protagonist of this literary gem is the Duc des Esseintes, an aristocratic aesthete who withdraws from society into a self-made sanctuary of aesthetic beauty. Finding daylight unbearably shrill, the jaded, misanthropic Duc lives by night, staving off crushing ennui by spending all his time and money on obscure, extreme and perverted pursuits. The crepuscular world of Á Rebours came to mind repeatedly as I viewed ‘What We Do in the Shadows’, an exhibition at Almine Rech by the Irish artist Genieve Figgis. Several of the characters inhabiting Figgis’s paintings resembled the image I’d developed of Esseintes over the years: frail, sickly and effeminate, face pitted and pocked by absinthe consumption or syphilis. Moreover, several of the characters depicted in Figgis’s paintings share his penchant for transgressive sexual pleasure.

As well as Huysmans’s aforementioned novel, Figgis’s paintings conjure a constellation of other references. Stately homes decay along with the fading bloodlines that once inhabited them – their once opulent imperial chambers now inhabited only by ghosts. Several paintings capture the claustrophobia of drawing room life. I found the empty interiors and sinister landscapes particularly successful. At first glance, these compositions appear almost abstract, suggesting that they have emerged from a spontaneous process in which the artist has revelled in the jouissance of paint. One feels that they are the fruits of a physical grappling with materials from which the artist derived the upmost pleasure. In a previous interview, Figgis affirmed that nothing has been planned or contrived in any way; everything happens by chance. Figgis’s technical virtuosity was well demonstrated in this exhibition. Several new paintings were notably larger in scale than earlier works, making visible greater levels of detail regarding the range of techniques and methods employed: paint, in livid and juicy hues, is splashed, poured and dotted across the canvas; gestural swathes of mixing and marbling create biomorphic blobs; an array of striking surface textures evoke Surrealist decalcomania.

Although humour, even frivolity, are consistent features of Figgis’s paintings, there is also a preoccupation with the hypocrisy that distinguishes high society. One can see the tendency to focus on how the privilege of peerage doesn’t prevent one from being repugnant. It is perhaps this aspect of Figgis’s work that has resulted in so many viewing it as a response to colonial Irish history. One of my first impressions when first encountering Figgis’s paintings in 2014 was how they represented and reflected upon particular aspects of Irish history. Indeed, many have suggested that her paintings elicit a very particular Anglo-Irish atmosphere. While this is certainly the case, it would be a mistake to view these images as referring exclusively to any one particular socio-cultural context.

The show at Almine Rech certainly resonated as much with the Belgians as it would with any Irish audience. In fact, viewing the exhibition in the Brussels context seemed particularly apposite, with several paintings depicting courtly culture and seeming to summon up episodes from the chequered history of the Belgian Royal Family. In particular, I was reminded of episodes of the life of King Leopold II (1835 – 1909) who was known not only for his lavish palaces and monuments, but also for establishing a private fiefdom in the Belgian Congo. Between 1896 and 1906, Leopold made at least three million francs from this operation, which was illegally run as a private business, with forced labour used to extract tons of ivory and rubber. To assist in the process, the King employed a mercenary military police known as Force Publique whose brutality contributed directly to millions of deaths. In Belgium, Leopold was also very unpopular, not just because of these acts of genocide, but because he was viewed by many as an immoral philanderer. Just before his death in 1909, he married the 26-year-old courtesan with whom he had been living amongst the palm trees in one of his palatial glasshouses.

Another reason Figgis’s exhibition had such local resonance was the fact that several works seemed to echo those of James Ensor (1860 – 1949), one of Belgium’s most intriguing painters. Figgis acknowledged the importance of his legacy in her group portrait Ensor and Friends, and there is certainly much that connects their work. Both artists have a proclivity for the macabre; their paintings reveal the influence of Bosch and Breugel, Pre-Renaissance artists who prioritised the visceral and expressive over the idealised. Both Ensor and Figgis reinterpret art history on a personal level, aligning classical painting traditions with contemporary concerns. But what unifies these artists most – and what made Figgis’s show such a pleasure to view – is their inimitable ability to produce artworks of unnerving beauty: seductive and lurid scenes from which it can be a struggle to avert one’s gaze.

Pádraic E. Moore is a writer, curator and art historian currently based in Brussels and Dublin.