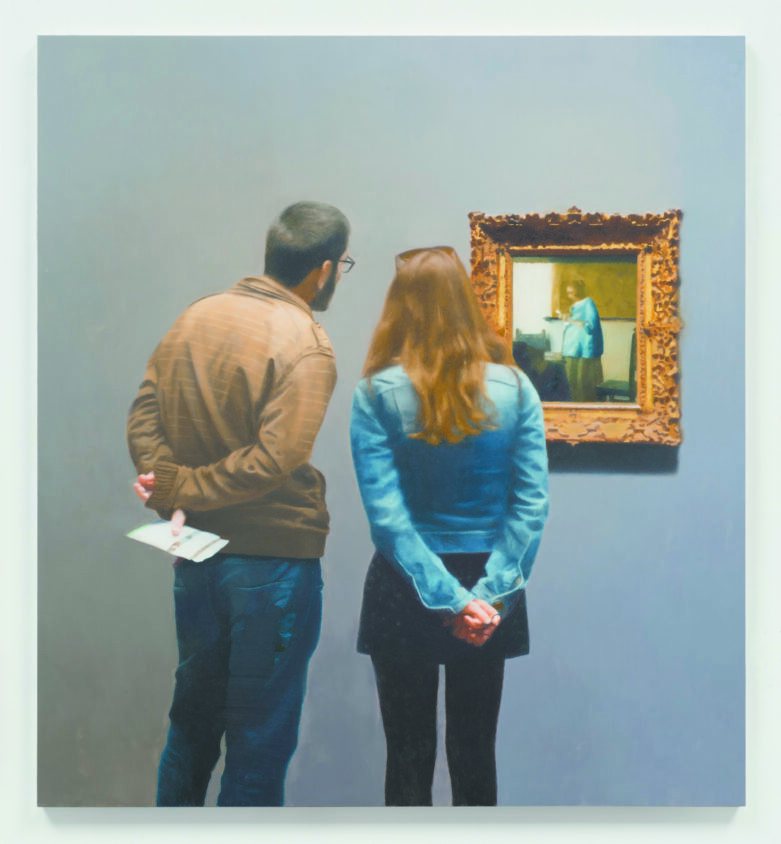 Writing a review of an exhibition means finding an angle, a perspective, a particular point of view from which to approach the work. In the case of ‘Faith After Saenredam and Other Paintings’ this is particularly challenging, as Paul Winstanley’s recent work here is almost all about angles, perspectives and points of view, in the physical, rather than metaphorical, sense. The main gallery contains 10 paintings, while two preparatory drawings are located in the gallery office. Both their inclusion and location seem puzzling at first, but as with so many aspects of this exhibition, clarification only comes with further investigation.

Pieter Saenredam was a seventeenth-century Dutch painter who specialised in church interiors. A preparatory sketch of the Mariakerk in Utrecht made by Saenredam in 1642 (the final painting is missing) provided Winstanley with the starting point for this exhibition, and therefore the justification for including the preparatory sketches mentioned above. In fact, closer examination of these two works shows that Winstanley is already playing with perspective, choosing in one case a two-point perspective, in the other a one-point perspective.

From these drawings, Winstanley produced two paintings: while Lost is a re-creation, Faith After Saenredam (2016) is a re-imagining. In the latter, he includes a window and a tapestry known to have existed in the church. In doing so, he keeps to the same dimensions and uses gold leaf as Saenredam did, while maintaining the same clarity of line and muted palette.

With these four paintings alone, Winstanley is demonstrating how representational art is something of a misnomer. The painting never simply represents: it shows us reality from a new perspective. In this case, however, there is another angle to be considered: which reality is being represented? That of the Mariakerk, or that of Saenredam’s version of the Mariakerk? In fact, the Mariakerk was demolished during the first half of the nineteenth century, so Winstanley can only interpret or imagine Saenredam’s view of the church. With this in mind, his preparatory drawings add a further layer of dissimulation in the ostensible ‘truth’ of these works. The ground underneath the viewer becomes even shakier when we learn that Saenredam himself did not always respect the reality before him. He is known to have enlarged, heightened and broadened elements for greater effect.

Saenredam also played with the perspective of the viewer, according to Arthur Wheelock, of the National Gallery of Art, Washington, who points out, for example, that “the rapidly receding barrel vault in St. Anthony’s Chapel in the St. Janskerk in Utrecht … only works spatially when the viewer is situated at the proper distance point and directly opposite the vanishing point.”1 This insight provides, albeit obliquely, a neat segue to another group of paintings in this exhibition – Apostasy (Enrapture), Apostasy (Drift) and Looking at Vermeer. – where Winstanley depicts viewers observing paintings.

In these works, the viewer (in the Kerlin) is looking at a painting (in the painting) from behind other viewers (who are depicted in the painting), conjuring a Chinese box effect which seems to ask: what does it mean to view? Are we drawn into the painting (within the painting) on its own merits, or is it the fact that someone else is looking at it that brings us in? Let’s be honest, who doesn’t feel more at ease, particularly in a gallery setting, when there are others present?

In the two Apostasy works, some of the viewers in the painting are moving – an effect created by Winstanley through blurring of lines, in strong contrast to the precision seen elsewhere. This highlights the static, single perspective of the image on view in the painting while simultaneously reminding us that we can move around to find other vantage points. Is it any wonder that this exhibition can feel vertiginous at times?

Looking at Vermeer (2017) feels less successful because it lacks this juxtaposition of motion and motionlessness, and indeed the remaining paintings add little to the delicious rollercoaster effect engendered by those discussed above. Metaphysic 1 and Metaphysic 2 do at least reference the gold leaf, which is an intrinsic element of the After Saenredam works, but Sunlit Birch is a jarring element that undermines the impact of the exhibition as a whole.

For a body of work, which at first appears classically representational and easily interpretable, ‘Faith After Saenredam and Other Paintings’ is, in fact, a magnificent exercise in ambiguity. Even the title lends itself to multiple interpretation – the ‘after’ could mean both chronologically and as an homage. On reflection, the inclusion of ‘other paintings’ may well be a deliberate attempt to further confound the viewer, who is, after all, already being challenged on many levels. What’s one more spanner in the works, in an exhibition which is as layered as an optical illusion by Escher?