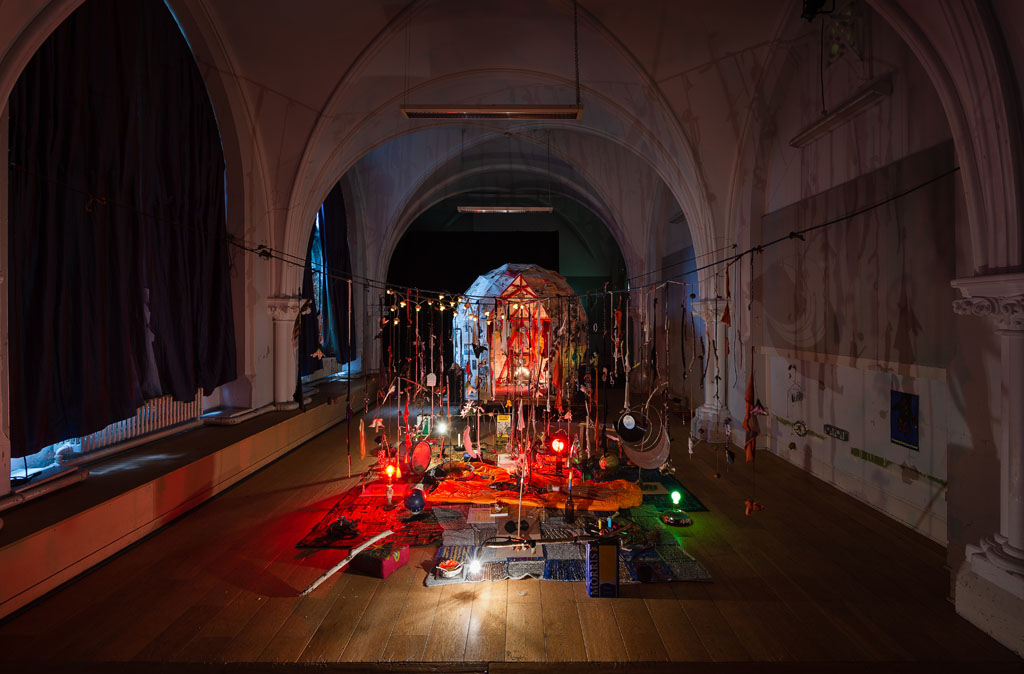 Chris Clarke: Your recent installation at University College Cork was entitled May the Moon Rise and the Sun Set. Can you tell me about this title and its significance to the project?
Richard Proffitt: I was thinking about this recently. The main overriding theme of the exhibition was this idea – both theoretically and physically for a viewer – of creating a space to where you can escape. It’s this immersive environment within which you can acquire some degree of solace. So, May the Moon Rise and the Sun Set was a kind of narrative device, suggesting that you can escape to a new place, a kind of non-descript landscape or environment that exists within your own consciousness or psyche, rather than a physical place. The title also recalled the idea of blessing a place, of wishing a place well for the future.

CC: Your work mixes different materials, references, codes, symbols, and you’ve previously talked about spirituality and subcultures as informing this approach. What about the visitor who is unable to decipher some of these associations? Is that decoding important to you, or do you consider the general, overall effect to be the predominant feature here?
RP: There are always going to be references within my work to particular forms of subculture that I’m interested in, whose origins may not be initially apparent to the viewer. But I don’t envisage that as being a problem. I guess the viewer often acts as somebody who stumbles across something; they can then decide whether they want to piece the different elements together. These ideas might be familiar to some viewers – who might have a passing or a keen interest in some of the themes – but I think the more interesting stance is when a viewer approaches the work as if it is purely alien to them. It becomes this combination of codes, symbols, signs, slang, different types of language, that forms a puzzle.

CC: The use of sound played a significant part in the installation. Can you tell me about your process of composition and how you see its role in creating an immersive effect?
RP: My composition of music uses a technique that is very similar to the way in which I make visual work. It is a collage technique, using pieces of sound sourced from a variety of places, including old and degraded cassette tapes that are specifically selected and cut up, looped and distorted. In some instances, they’re unrecognisable from their original form, becoming ambient, trance-like snippets of music and voice, repetitions and drones. The sounds sourced from tape loops are often collaged with field recordings and improvised instrumentation, to create this fluid, mournful, drifting soundtrack that appears to be from a time period that couldn’t have occurred, and, in this way, it has certain hauntological characteristics. The combination of sound and lighting is crucial, in generating an atmosphere which leads to immersion. I think sound is the most emotionally immediate of the senses; it changes the place it inhabits instantly, while also altering a person’s perception of that place. It functions like the idea of a ghost – it’s there and it’s felt, but it’s rarely seen.

CC: The installation was situated in the very particular site of St. Vincent’s Church – which has been taken over by UCC’s Music Department – with the main installation happening in the basement space of O’Riada Hall. How did the context and the physical architecture of that building inform your choice of materials, effect and layout?
RP: I don’t know if this relates to the place itself, or if it comes from my experience of being immersed in Irish culture, but there were more references than usual to Christianity in that work. A lot of the stuff that drives the work is the accumulation of materials and often these are selected for their purely aesthetic condition. So, if you’re sourcing materials in Ireland that reflect upon or have reference to faith or belief, then 90% of the time, they’re going to be Christian in their appearance.

CC: But a very particular Christianity – there is that sense of ritual or mystery that seems inherent to Catholicism.
RP: That’s something that I have become more interested in. I grew up as a lapsed Protestant, so I had no idea of the ritualistic aspects of Catholicism – the whole smoke and mirrors, the sense of theatre and occasion. So perhaps that fed into the work but, essentially, it was still embedded in this ongoing quest to restore elements of spirituality to contemporary art, in a way that doesn’t only use those references ironically. I’m not trying to make light or to joke about these things. It’s trying to emphasise their good qualities.

CC: There was a real sense of trajectory from the upstairs entrance and corridors, into this crypt-like basement, where the artwork was installed. Could you expand on this sense of passing over or descending into the work? Is this primarily a means of creating anticipation, or a ritual in its own right – a way of initiating the visitor into this ‘other’ space?
RP: Well, the building has this very strong sense of character anyway, but yes; the entrance doors and corridors, with the pattern-tiled flooring, gave way to a feeling of being in an ‘other’ place and I guess the visiting public are not usually privy to this building. It has a feeling that, once all the students and lecturers go home and it’s just the caretaker left, it could well be home to many spirits, returning to the building’s religious origins. But before entering the O’Riada Hall – a magnificent space in its own right, with its huge neo-gothic windows and ceiling arches – I think it was necessary for this gradual descent into the main space to occur. It relates to that feeling of discovery, of something being amiss, of a ritualistic entering of a tomb, if you will; a space with a very determined atmosphere, an experience encouraged by the presence of the sound work, which reverberated along the corridors leading to the O’Riada Hall.

CC: You mentioned the installation as something that the visitor surrenders or escapes to. Does this connect in any way with your strong interest in contemporary popular music and the specific sub-genres and subcultures around music?
RP: Subcultures become religions for a lot of people. They obtain or acquire their own set of rituals, beliefs, props or ways of dressing.

CC: There was a suggestion of entering something otherworldly, transcendental and beyond the prosaic rituals of everyday life. Was there a sense that the installation – as an enclave or a site of refuge – allowed one to step away from the mainstream world outside?
RP: I think that aspect of the work comes from the way that I personally expect to experience art. I want it to take me somewhere else; I want to feel like I’m somewhere else when I’m in an exhibition. Paintings can do that when you’re transfixed on a work – the same with sound or a video piece – and I think that all the best art does achieve that. It takes you away from where you’ve been, and you forget that you’ve just stepped in from the street. I want the viewer to experience something that they weren’t expecting or haven’t felt before, a way of experiencing objects or materials in a way uncommon to them.

When I was young, I was always a child that would stupidly travel across the railway tracks, if it was the quickest route somewhere, or wander along the embankments, where you weren’t supposed to be and where you would see all kinds of discarded and forgotten things – I’ve always been like that. I was interested in the idea of great discoveries, like the tombs in Egypt and this idea that, behind this locked door, or behind this gate or fence, lies an entrance point to something that people have not experienced before or didn’t realise was happening. It’s like stepping into a cave in the south of France and discovering paintings from thousands of years ago or stumbling upon a burnt-out car on a wasteland. These are experiences that have always fascinated me.

Richard Proffitt’s installation, May the Moon Rise and the Sun Set, was curated by Chris Clarke for the Cork Midsummer Festival. It took place from 14 to 23 June at University College Cork’s Department of Music, Sunday’s Well, Cork.
richardproffitt.net

Feature Image
Richard Proffitt, May the Moon Rise and the Sun Set, 2019, installation view, University College Cork Department of Music; photograph by Jed Niezgoda, courtesy of the artist and the Glucksman.