THEO HYNAN-RATCLIFFE CONSIDERS PHASE ONE OF The 39th EVA INTERNATIONAL.

‘Little Did They Know’ – the title of EVA International’s Guest Programme – holds apt and ominous meaning for us all now. It is an almost uncanny prediction of what the biennale would encounter in the months preceding the launch of its 39th edition in early September. Developed by Istanbul-based curator, Merve Elveren, this year’s Guest Programme seeks to assemble “strategies of collective action and gestures of survival.” We stand at the intersection of fiction and non-fiction, past and present, across national and international documentations of land.

Notably, this is the first manifestation of the reconfigured biennale programme, now delivered across three phases and comprising four key strands: Platform Commissions, Partnership Projects, Guest Programme and Better Words, all overseen by EVA Director, Matt Packer. Occupying various sites across Limerick city, the presented artworks explore the thematic premise of the ‘Golden Vein’, a nineteenth-century term for the fertile landscape of County Limerick. Drawing attention to the land as a powerful force, artists examine political, economic and symbolic relations, as well as impacts on labour, personal experience and collective memory, with ‘contested space’ at the core of this biennale.

In the context of the pandemic, anxieties around occupying public space have accelerated the retreat into digital realms. Over the last six months, art institutions have had to position themselves, regarding how they occupy space – with exhibitions either waiting behind closed doors or being adapted for the virtual realm, their physical sites abandoned. This has forced radical new understandings of how we communicate and consume contemporary art, and how we facilitate its making, during one of the most tumultuous global experiences in our time. Tenaciously launching a physical exhibition, during a time of widespread virtual showcases, EVA consciously acknowledges that artworks, and the conversations unfolding around them, need physical space and bodily proximity. 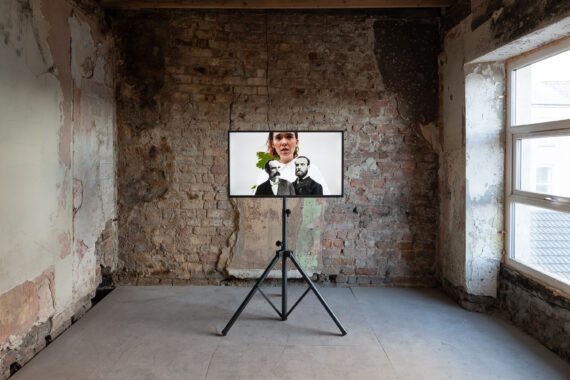 Eimear Walshe, The Land Question: Where the fuck am I supposed to have sex?, 2020, installation view; photography b Jed Niezgoda, courtesy of the artist and EVA International

The top floor of the EVA Offices and Archive plays host to a video work by Eimear Walshe – one of four artists selected to develop new work for the Platform Commissions. Visitors find the artist waiting for them onscreen, with arms outstretched, for a sermon of sorts. Walshe’s piece places power onto the viewer to activate the context of the scene.  The Land Question: Where the fuck am I supposed to have sex?, is a 38-minute video piece, a self-proclaimed ‘artist talk’, which draws attention to the contested occupation of land in Irish history. It acts both as a personal monologue on how land should be used, and as a form of political questioning as to how we have allowed land to be appropriated – economically and personally, internally and externally, particularly with regard to safety and intimacy. In an earlier interview with the artist, they expressed the urgency of their intention to “rethink (and materially alter) how land is valuated, shared, distributed, and inherited.” The use of personal monologue runs throughout the biennale, as a beautiful narrative rhythm, tying individual and political perceptions together.

Speculative fiction is used both as a material and structural device in Bora Baboci’s audio work, which is located on the river walk at Merchant Quay. Viewers access the piece via a QR code and listen whilst watching the Curragower Falls. Predictions (2020) constructs a fictive weather report, using tidal charts to forecast the Shannon River running dry, Limerick’s heart laid barren. As we observe the sheer force of the water, Baboci’s forecast toes a beautiful line between probability and impossibility.

In the Sailors Home, the curator’s principal interest in creative archival research is apparent. First encountered is the archive of the Women Artists Action Group’s (WAAG). A slide projection shows artworks by Irish female artists, giving them space and recognition within the context of their first exhibition in the late 1980s. In Michele Horrigan’s installation, titled Stigma Damages, a large-scale photograph appears to depict raw geology, perhaps a close-up of rocks or layered earth. However, details of a human landscape appear; it is simply and elegantly, a screenshot from Google Earth, depicting the site of an aluminium refinery, situated on Aughinish Island, just 20 miles downstream from Limerick city. Display tables also contain archival material relating to the site, collected by the artist. 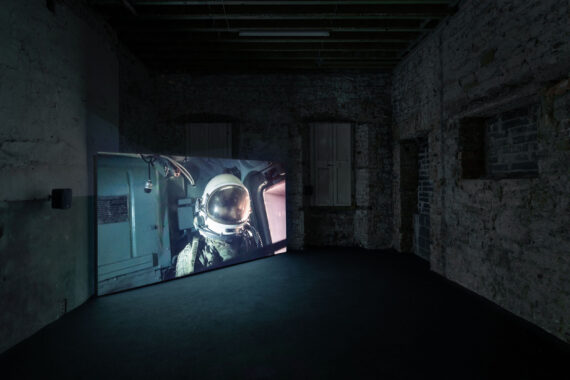 Driant Zeneli, It would not be possible to leave the planet eart unless gravity existed, 2017, installation view; photography by Jed Niezgoda, courtesy of the artist and EVA International

This extraction of resources from the landscape is mirrored in Driant Zeneli’s films, installed at the back of Sailors Home. Two parts of a film trilogy are currently on display, with the third to be exhibited in one of EVA’s subsequent phases. Beneath the surface there is just another surface deals with the border of fact and fiction, functioning in the associative visual language of science fiction. The films records chromium extraction in Bulqizë, which is used as an alloy for steel, eroding and rewriting the landscape and power structures of Albania. Multiple perspectives on engagement with the landscape – including various forms of value, extraction and occupation – enhance understandings of the destruction of land, both nationally and internationally.

Áine McBride’s and/or land is a sculptural intervention in the form of an active and functional object – a new wheelchair ramp to improve accessibility. It appears at the entry point, as the reshaping of the site on the microscale of the building itself. McBride has also expanded into everyday spaces around the city, presenting a series of photographic works. Along with Eimear Walshe’s billboard work, How Much No Thanks (2020), the Platform Commissions demonstrate an ethos of purposeful interaction with Limerick’s urban centre.

Stacked on the floor of the Sailors Home – and available in locations all around the city – are free copies of the publication, The Inextinguishable by Melanie Jackson and Esther Leslie. The illustrations draw you in, visualising and analysing the potent, political power of milk and our human connection with it, based on associations with nurture, sexualisation and biotechnical advancements in its production. Our associative and emotive intersections with the materiality of milk are beautifully constructed by the artists, specifically in relation to the Golden Vein, the country’s most prosperous land for dairy farming.

Along the walls of the atrium in Limerick City Gallery of Art (LCGA) is Eirene Efstathiou’s series, A Jagged Line Through Space, which transports us to the Exarcheia district of Athens. Shrouded by frame and glass, lie delicate lines and place-making imprints. Razzle Dazzle, a series of mixed media works on paper, documents the parameters of the Exarcheia neighbourhood, mapped by six constituents, which are intercepted and translated by the artist’s hand to form pseudo-cartographic images. In a similar vein, Emily McFarland’s documentary video, Curraghinalt, tracks the changing ecology of the Sperrin Mountains of West Tyrone with imposition and intervention presented as acts of protection.

Yane Calovski’s sculptural intervention, Personal Object (2017), reworks, activates and responds to the gallery, expanding to fill the space. This installation catches the attention of the body, coming across as some kind of self-reflexive archive. The past and present are bridged, as new and old works merge together. Drawings, photographs, collages and text hang on false walls. As one moves around the space, hidden relationships to the architecture are revealed. Wooden blocks hug the skirting board, and a false room opens out, displaying a mattress resting on the floor. These elements are delicately formed sculptural scenes, but it is hard to pinpoint exactly where these belong within the artist’s personal archives. 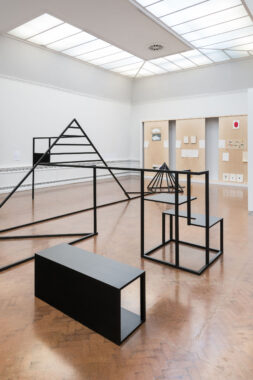 Walking through LCGA on 6 October – just before new COVID-19 restrictions come into effect, closing venues to the public once again – the rhythm of Laura Fitzgerald’s  installation, Fantasy Farming, finds me, or I find it, as I move between the two hayshed shed spaces, following, tracing, listening to the back and forth of the speakers in each space, as they alternate in conversation with one another. We are standing in one hayshed, listening to the sound of its own making and the constellation of objects and drawings that fill the room, all bound by this voice of the artist as she narrates the experience – ours and her own. It is the clicking and the whirring; the presence of the wires coiled on the ground, highlighting the interconnections of the speakers; a network around the room. It is the sheer openness in her voice as she tells us exactly how she made the pieces we are standing inside, grounding the work in the site and in the land, as it is now: her seeing the welder on sale in Lidl or dashing to Easons to get markers on offer. This is how things work, daily in the spaces we occupy. They are important and are part of the work’s materiality.

This first phase of the 39th EVA International marks an incredibly exciting beginning which is testament to the creative curatorial decisions, the strength and honesty of the voices, and the adaptability of the artists and the whole EVA team. The individual artworks and research-based projects presented encapsulate actions and dialogue aimed at reorientating, reacting and responding, while creating new knowledge of landscape and our collective relationships with it. The framing of these works is a poignant reminder of the kind of questions we should be asking about the spaces we occupy.