Rachel McIntyre: Your two-person exhibition, ‘What Remains of This Place?’ was temporarily installed around East Wall, Dublin in November. I’m interested in why this area was chosen, beyond the necessity of staying 5km from home.

Richard Proffitt: Although close to the city centre, East Wall is only recently seeing the effects of gentrification. It retains an essence of what old Dublin would have been like, but there’s a slight infiltration of newcomers, and more visibly, corporations like Facebook. But what I’ve found interesting since the onset of the pandemic is how the influence of these changes has waned, as though the area is returning to itself. I felt I was able to see the place again and to take in its texture. 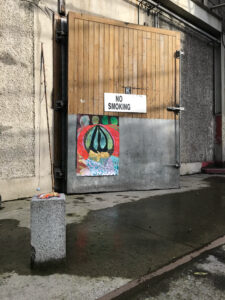 RM: The works were situated in forgotten edges, where the old and new are patchily knitted together. Motifs and patterns in your works were echoed in the environmental backdrops – the graffiti, the damp patches on pebbledash or brickwork walls, the weeds poking through. It allowed the works to blend in, becoming at home in their surroundings. Eleanor, your painting Wizard comes to mind.

Eleanor McCaughey: I first expected to situate my work in the IFSC, so began taking photographs there. Although the buildings are mostly empty, there are still security guards patrolling. You’re being watched, which is eerie in such an abandoned setting. There had been so much noise, construction and energy from the many large building complexes, it was never quiet, never dark. The sudden silence during lockdown was unsettling. I began setting my works up on pristine picnic benches outside office developments but immediately it didn’t work. Like Richard mentioned, the texture in the older part of the neighbourhood was perfect. 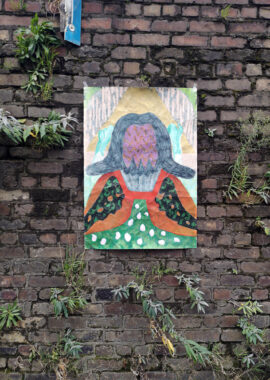 RM: Richard, I’m also thinking of your work, Daydreamin’ Dude / If I Was in L.A. – a shrine-like installation with sound, documented through video as well as photographs. Electrical cables run along the wall; there’s a sense of ambiguity as to what is part of the artwork and what isn’t.

RP: Yes, that was deliberate. That piece was installed in a derelict loading bay that Eleanor and I came across. There’s so much construction in various stages of completion and for purely practical reasons this lent itself to the installations. It’s very easy and quick to add a nail and hang work from makeshift wooden hoardings.

EM: When I took my work out of the studio, it looked so different. I had felt there was a sense of absurdity to the sculptures and paintings, but this completely changed in this new context, which grounded them and brought out their earthly qualities.

RM: You both often create structures to house your works, either intrinsic to them or that contain them in some way. Did this experience feel very different?

RP: I’m comfortable with showing my work in non-traditional spaces. What I look forward to is not trying to fit the work in but adapting the work to the environment. I want it to blend in and become part of its surroundings, like the objects had gathered or built up over time.

EM: It was very exciting. In my studio, I meticulously set everything up – lighting, reflective backgrounds and specific material. This experience made me think about my work differently and to reconsider the extent to which this is necessary.

RP: It was beneficial, especially now that most exhibitions are being cancelled or postponed. The process of installing allows me a sense of distance from the work that is impossible in the studio. There, my peripheral vision is clouded by the other artworks and materials I have around. 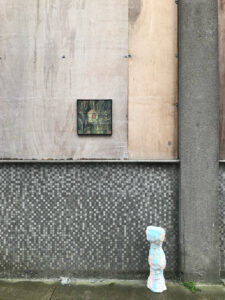 RM: Some of the installations reminded me of roadside shrines or memorials. Was this at all a response to the ongoing pandemic? Could you both speak about spirituality in your work?

EM: It’s interesting, my family are religious and their response to the pandemic is to wonder why this is happening, which does lead me to consider it from that angle too. One of my installations, If there is something, a vase sculpture with plastic flowers, comes to mind. I had been thinking about the ritual of those type of memorials, like bouquets tied to lampposts. I often think about the value we assign to objects.

RP: I used to have a collection of photographs of desert shrines in Mexico, built in the middle of nowhere. References to spirituality have been embedded in my work for so long, I’m not sure where they come from anymore. I’ve always been interested in attributing meaning to everyday objects, often using items I find while walking, like using broken old earphone cables to make a dreamcatcher.

RM: Returning to the start of the project now, where did the title come from?

RP: For some time, I’ve toyed with the idea of an outdoor exhibition, with a set of coordinates as invitation. Then, in October, Eleanor posted one of her sculptures on Instagram, which looks like a leg with a tealight balanced on the foot. As soon as I saw it, I thought we should work together on a two-person exhibition. Standing in my back garden, I immediately sent her a message with the title of the show. I was thinking not only about what will happen when we emerge from the pandemic, but also how East Wall itself might change.

EM: When you messaged me, I had just finished watching the documentary, Notes on Rave in Dublin, about the dance scene in the city in the 1990s and early 2000s. After seeing footage of illegal raves in the deserted docklands, just around the corner, the title – especially posed as a question – really resonated.

‘What Remains of This Place?’ unfolded on Instagram from 9 – 15 November 2020.
@whatremainsofthisplace

Rachel McIntyre is Gallery Manager at The Douglas Hyde Gallery. Her background is in the history of art and she has written about art for the gallery and independently.