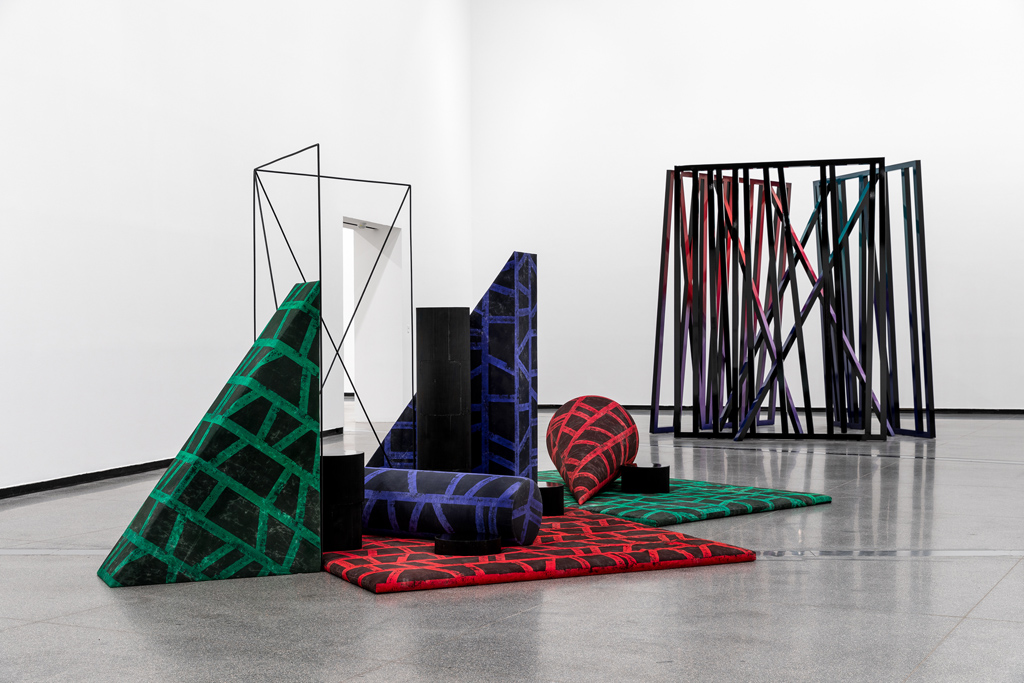 Jonathan Carroll: Your biography is the perfect antithesis of Brexit: you were born in Dublin; studied at University of Ulster, Belfast; live in London and have an MA from Goldsmiths; and you are being brought to Venice by Void Gallery in Derry, with a curator from Cork. Is it good timing for such a European endeavour?
Eva Rothschild: We were not alone in being anxious about getting everything transported to Venice before the initial Brexit date. The Scottish, Welsh and British pavilions were all installing early, to avoid any difficulties. There is nothing in the show that directly relates to Brexit – I don’t make work that has a narrative in that way. It is interesting to be working in Northern Ireland during this pivotal moment in UK-Irish relations. Living in the UK, it is very important for me to identify as an Irish artist.

JC: The selection process for the Venice Biennale is very competitive and involves a lot of partnering between commissioner, curator and artist. Can you give insights into how your team came together?
ER: I have wanted to do Venice for ages but hadn’t realised you had to apply for it. As part of the open-call process, curators and commissioners nominate artists who they want to work with. Mary Cremin and I had wanted to work together for some time, and then she was appointed Director of Void in Derry. Mary is a force to be reckoned – a dynamic yet calm person who can deal with anything and has great curatorial flare. You also have to ensure that there is some sort of institutional support, to coordinate and provide structures to make the project happen. A big issue, of course, is additional funding.1

JC: One of the Arts Council’s main criteria for Venice artists is the capacity to bring their practice to another level – were you asked to “think big”?
ER: I am nearly 50 and have been working as an artist for 25 years. I suppose if you want me to do a project, you know it will probably be sculpture, though this is not the same as making a show for a small commercial space or doing an architectural project. In any instance, you take into account the context of the exhibition. Showing in Venice is like doing the most public exhibition you can imagine. There is an expectation that the work will demonstrate a scale and ambition not suitable in other contexts. As a sculptor, I feel that a lot of internationally recognised contemporary Irish art is quite narrative-based, or very much to do with time-based media. I felt it was important that my work stayed true to a sculptural core, so that is very much how I approach the pavilion, to emphasise physical sculptural engagement. It is worth noting that the Irish pavilion is situated as a continuation to the main Venice Biennale exhibition – curated this year by Ralph Rugoff – unlike the standalone national pavilions located in the Giardini. It’s the only remaining artworld show organised around national identity. The history and longevity of the Venice Biennale and the positioning of the pavilions echoes the colonial structure that is now eroded. The Irish pavilion is sort of in the ‘post-colonial’ section – it’s a good place to be.

JC: Can we expect something of the scale of your 2009 Duveen Commission, Cold Corners, for Tate Britain?
ER: It is within the idiom of my work, but I have considered the architecture of the space and the flow through of people. I was warned that nothing can prepare you for the crowds coming through during the first few days. The four main sculptural elements I will be showing are very demanding, in terms of their physical requirements. That is one of the great advantages of showing in the Arsenale – there are not that many floors in Venice that can take concrete blocks or heavy sculptures. The location could not be better, in terms of access. This space is also quite rough and ready, so the work needs to be robust and coherent enough to deal with those kinds of conditions and to hold its own. My work is either episodic or made up of multiple elements – although you see it arranged in one way, it allows for the possibility for it to be shown in different ways.

I am very interested in how people view a room of sculptures that is also populated by other people – they give a kinaesthetic sense of scale and possibility in relation to the objects. We all have the experience of going to these blockbuster exhibitions and peering over people’s heads, trying to catch a glimpse of the rarefied artwork. That’s not an ideal situation but I think with sculpture, you get to see how people look at things, how they comport themselves in relation to the object, and how they arrange themselves in their modes of looking. I am interested in spectatorship, especially in a spectacular situation like Venice. I am very aware that the time people give to an artwork is miniscule. Within these few seconds, there is a desperation to find the language to go with it, so a search for the panel and title ensues. To counteract the tendency for the Irish pavilion to become a corridor, I have included seating in the exhibition, to encourage people to stay a while. I’ve also added a sort of forced interaction with the work, by creating barriers which corral the visitors. You can’t just walk past the work; you have to circumnavigate it in some way.

JC: Perhaps there will be some sort of relief for the viewer, after they’ve come through this heavily curated narrative section, to find ‘stuff in a room’?
ER: Yes. Viewers will have encountered many shows within the Arsenale, by the time they get to the Irish pavilion. And that is what it comes down to – it’s ‘stuff in a room’, stuff you are not going to find anywhere else. I think when you talk to sculptors who are very involved in making, there are lots of things that inform their work but usually they are overridden by the desire to see something exist, or to force the material to do something. So, there is a tendency to place the idea above the object, but for me, the object is key. I think there is such a divorce from materiality now, that I feel very privileged every day to be actually dealing with ‘stuff’ rather than screens. I squash something into a box, or I saw something in two, or I make a mould. That is what I would prefer to do all day – I like physicality, I like the sense of labour, the sense of work. If I wasn’t doing this, I would rather be doing something physical than something chair-bound.

JC: Can you discuss the significance of titles within your work?
ER: I find titles are very important. Titles direct the language-functioning part of the brain towards creating meaning for the visual. People also view the title as a kind of crutch, so I think it is important that I design that support. I suppose I am continuing my authorial role through the titles of the works. I hate when works are untitled. In the process of developing this exhibition, I changed the title of an artwork, which was problematic, as the catalogue essay had already been edited. However, this amendment was important to me, as the work is settled now, whereas it felt a bit unsettled before.

JC: There is a certain pressure on artists to be relevant to the current moment, but your work maintains a certain detachment that insulates it from this need to continually comment on the present. In your press release for Venice, there is mention of allowing for “contemplation of the material legacy” of both “present and past civilisations”. Is it important for you to avoid time-specificity within your work?
ER: One of the weird things about doing something like Venice is the level of discussion prior to the opening and the drive to fit things into a series of subjects. These things inform the work, in that they form my view of the world, but the work itself is not illustrative of these things. I would be very much of the Susan Sontag ‘Against Interpretation’ kind. I do want the work to float free of those things, but that is not to say that my own concerns are not the concern of the work. There isn’t usually the drive to sort of shoehorn the work into a narrative, in the same way as there is when doing something like the Venice Biennale.

JC: The Irish Pavilion usually returns to Ireland after the biennale closes in late November. Where will it be shown?
ER: Having studied in Belfast, I have a strong link to Northern Ireland and was very keen to show at the Void Gallery in Derry. Then we will be showing in VISUAL Carlow and somewhere in Dublin – as yet, we have not decided on a venue.

Jonathan Carroll is a curator and writer based in Dublin.

Eva Rothschild is an artist who currently lives and works in London. The 58th Venice Biennale will take place from 11 May to 24 November 2019.

Notes:
1 Eva has produced a series of prints and sculptures to help fund the final project.