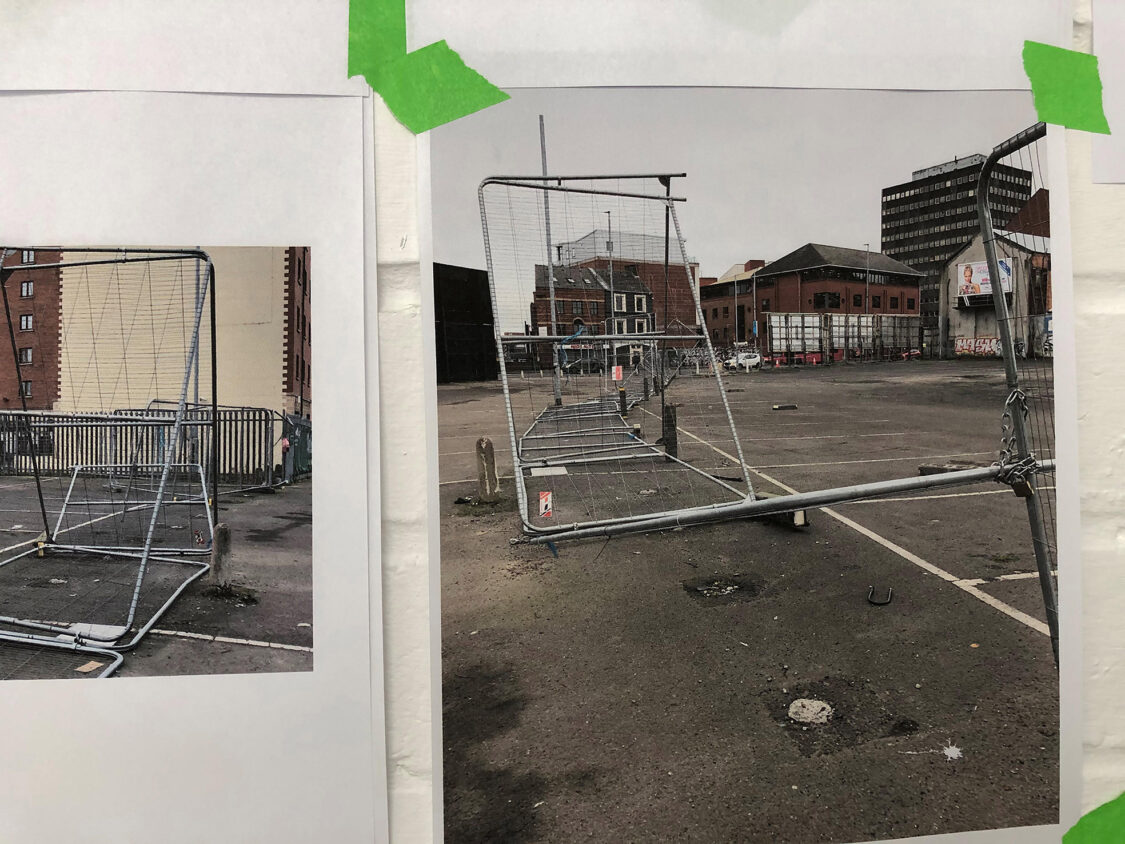 Sam Keogh: Well, to prepare for our conversation, I was reminding myself of some of your work. I looked at the series of ‘Manifesto’ works you made with John Seth, where you collect things from the street and bring them to the studio and clean and arrange those found things, whilst documenting the process. Then you present the documentation with the arrangement of objects in the gallery space. And it made me think – and I don’t mean this in a derisory way – this is absurd. Because what you’re doing is trying to make meaning from scratch, which has to begin with meaninglessness. I feel that whenever I begin something in the studio, that kind of hollow feeling of absurdity. But then I’ll finally do something, and then do something else to that thing and eventually something unexpected will happen, some phenomenon which is pleasurable to manipulate and eventually through that manipulation meaning starts to blossom. But in the beginning, it always feels ridiculous or absurd!

Anne Tallentire: It does. I think it is about being engaged with a process of looking for something that you can recognise as being meaningful to an ongoing internal conversation or a set of problems or ideas. For me this process requires in part going into a kind of temporary amnesia or blindness that is then necessary to recover from, to find something not ever fully understood. A folly perhaps. You don’t want what you find to be too familiar, because if too familiar it can lead to mindless repetition. So, this thing that is recognised has also to be uncomfortable, strange and unknown. It is a slightly bizarre activity, yes.

I was in Belfast over the last few days researching for work that will be in a show there this coming summer. I’m originally from the north, so Belfast is familiar, but my relationship to the city has always been in relation to other people, my family or teaching duties. I’ve seldom made or shown work there, so I knew this would take me on a kind of fool’s errand that would necessitate recalibrating my past and present. So, as I often do when arriving to work in a place I don’t know, I walked around parts of the city to places I did not know, engaging a process of estrangement, that enabled me to think and experience the place differently. It was amazing.

AT: Well, I knew I wanted to find sites earmarked for or in various states development. Wasteland places. By total chance, I was given a room at the back of the hotel I stayed in, near the city centre, that overlooked a large derelict site. In the centre of the site, there was a black stain I assumed to be the remains of a 12th July bonfire. I then noticed along one edge a row of pushed over, temporary metal fencing panels standing in the most extraordinary configurations. It’s the kind of metal fencing you see at music festivals which sit in concrete blocks. This particular fence had been reinforced at key points with two more sections joining to form a triangle. But large sections had been pushed over, upended.

Simply, it was fencing, upended in that particular way, but it was doing something I recognised but had never seen before. I trespassed into the space, to take some photographs. Not long after an alarm began to beep which was, I think, triggered by a surveillance camera. Not wanting to deal with having to explain my presence, I walked back over the fallen section I had come across. When I came back a few hours later, it was all mended. All the fences were upright again. So, this may never go anywhere, it may never become anything. On the other hand, what I describe here is to do with a familiar process. What I recognised in this were certain tropes that have been used in my practice before. The kind of processes that I on my own, and when with John, have used for many years. Going to a place, throwing a dice more or less metaphorically, to take ourselves out of something that’s already prescribed and then looking for something with which to question what that thing was.

SK: I’ve been thinking about fencing too. There’s another type of fencing which stretches for a number of kilometers along the entrance of the Eurotunnel in Calais called ‘Eurofencing’. I read the webpage of the company who make the fencing and the language they use to describe it is so calculated. They only really describe its formal qualities, the durability of its materials, how easy it is to install. The closest they get to invoking an image of a human in relation to the fence is when they describe the ‘aperture’ or the space between the metal rods, as too small to let fingers or toes get a purchase – so it can’t be climbed. But to be a deterrent there needs to be something in excess of function, it needs to spill into being a sign. So, whilst it does physically prevent people getting into the tunnel, its main function is to produce an image of itself. On one side, on our side, as people who have the ‘correct’ passports, it’s to produce an image of ‘something being done’ which both assuages and produces another image – a racist of ‘floods’, ‘hordes’ or ‘swarms’ of refugees coming into Europe. And on the other side of the fence, it’s to produce an image of the impossibility of getting to the other side.

AT: So, there is no doubt that you cannot penetrate this, that it’s fool proof.

SK: Yeah, and also the reason these are fences rather than walls is because you can see through a fence with a security camera. So if you’re trying to traverse it, it threatens you being seen by the police and not being able to hide, even if you do manage to get a purchase on the aperture (which is a word we’d be more familiar with as a part of a camera!) So, it has all of these aspects which are about a kind of carceral visibility, and its primary function is as a visual deterrent. But to be that, it needs to be in excess of its function to physically keep people off the tracks, a kind of maze of walls that you can’t hide behind. But to serve that meta-function, there has to be this ridiculous or absurd amount of fences.

AT: In Belfast, I also noticed protective panels around pavement scaffolding. One in particular grabbed my attention, because it was so high-end and utterly overdesigned, paradoxically named ‘layer protect system’. This ‘protect system’ was doing two things; it was protecting people from walking into scratchy and sharp scaffolding but more so, it was protecting the status of the building. It looked like a section of a temporary wall, but it had an exaggerated level of durability that could be read as a fence but more so as something that was leaning towards a logic-related infrastructure. It had a strange abject quality in it’s over clean gleaming materiality. A polished and impenetrable finish which spoke to a whole other agenda related to ‘fencing’ that I hadn’t encountered before.

SK: It’s kind of like the metal sheets they put on doors and windows of empty buildings to stop squatters moving in. Just a smooth seamless surface, without even a crack to jimmy a crowbar into.

AT: Yes, unlike the fencing that was upended, the disrupted open fencing. There it struck me that what had occurred was a wilful act of making something, not to do with the thing itself, but more an act of sheer pleasure that communicated something of that time and place. Through manipulating those objects the people involved were taking decisions not so far from what we (as artists) take too. This is about acknowledging the creative agency which draws our activity very close to the activity of the street. I’m very interested in that; in how people who are not thinking through the lens of art – any kind of sculptural activity or language associated with visual culture – do things that are extraordinarily informed about how to disrupt, or how to add to or subtract from daily life.

SK: Yeah, and what do you think informs those decisions? You think it’s to do with pleasure?

AT: I think there’s an element of that. Yeah, that comes into it. Arrangement of stuff in the world is a kind of activity that most people engage with. Or trying to have some sort of agency in relation to the physical world to speak to the world we live in.

SK: A kind of unalienated work. Which is what I would say, is the most open definition of what an artist is.

AT: Yes. I think that’s a wonderful description.

Sam Keogh is an artist based between London and County Wicklow. His exhibition, ‘Knotworm’, runs until 1 March at the Centre Culturel Irlandais, Paris. Upcoming exhibitions include ‘Outer Heaven’ at Southwark Park Galleries, London, in June 2020.
samkeogh.net

Anne Tallentire was born in Northern Ireland and lives and works in London. She was a recipient of the 2018 Paul Hamlyn Foundation Awards for Artists and was on the selection panel for the 39th EVA International ‘Platform Commissions’. A major solo exhibition of recent work will run at The MAC in Belfast from August to November 2020.
annetallentire.info