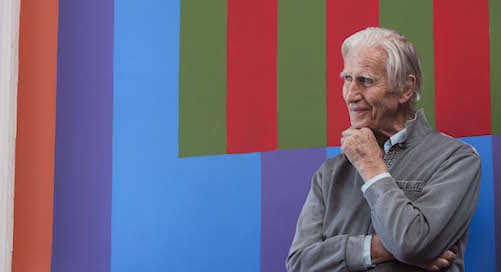 “Temporary artworks, I think, sharpen the viewer’s perception. What you see is under threat of withdrawal. The mortal artwork already includes quotients of regret, anticipatory flashes of memory, including the memory of yourself in the artwork. So, occupying a temporary installation can be a complex affair.” – Brian O’Doherty (4 May 1928 – 7 November 2022)

Following the passing of pioneering art critic and conceptual artist, Brian O’Doherty, we are republishing an interview with Brian, originally commissioned for VAN July/Aug 2008.

BRIAN O’DOHERTY DISCUSSES ISSUES RELATING TO HIS ART CAREER WITH BRENDA MOORE-MCCANN IN HIS FIRST INTERVIEW SINCE HAVING OFFICIALLY BURIED ‘PATRICK IRELAND’ – THE PSEUDONYM /PERSONA THE ARTIST HAD WORKED UNDER SINCE 1972 IN PROTEST AT BLOODY SUNDAY. (1)

Brenda Moore-McCann: The Visual Artists News Sheet focuses on artists approaches to the development of the various professional, administrative and organisational aspects of their careers. Examining your art practice over the last 50 years indicates quite a different attitude to such a systematic approach. One might even say it demonstrates a subversive attitude that also appears in your critical writing. For example, in the 1986 Afterword to Inside the White Cube you noted that the economic system surrounding art was virtually unquestioned (aside from art of the 1960s and 1970s) by the key figure of the artist, so that we get the art we pay for rather than the art we deserve. Earlier in the 1960s when art critic of the New York Times, you wrote The Corruption of Individuality, in which you descried the erosion of artistic freedom in the face of the seductive spoils of a “hothouse, big-money atmosphere.” Finally, you once said about Orson Welles: “To separate Welles, Welles the director, Welles the actor, Welles the writer, Welles the magician, Welles in his various persona, from his work is a hopeless task, and eventually a dubious one. Like his films, he was his own fiction. He and his art interpenetrate in ways that some criticism finds unallowable. But who is making the rules here?” All these texts seem to me to reflect attitudes that appear within your art. Would you agree?

Brian O’Doherty: Everything seems so random, arbitrary and subject to chance that it’s a wonder we end up where we are. My own career, if you can call it that, is shaped by the usual coincidences, chance meetings, with nudges of good luck. I owe a lot to other people. To Thomas McGreevy, to a great woman named Nancy Hanks, to my wife Barbara Novak. Out of all that comes some sort of fiction you pass off as yourself, whatever that self may be. I never see the self as a stable entity, but as a fluid, multivalent series of accommodations to inward and outward pressures, giving birth to different personae. That’s everyone’s experience, I imagine. I’ve simply literalised some of mine—personae, I mean. Of course, all this doesn’t mean you don’t have your head together when you cross the road in traffic. I call that practical everyday person, who shops for groceries and pays the rent, ‘good serve’, a decent sort of fellow but not over-bright. I’d be lost without him.

BMMc: Your artistic strategies from the sixties on have deliberately sought to evade a consumerist approach. Probably the best representative category within your oeuvre is the ephemeral Rope Drawing installations of the last 36 years carried out by your recently buried persona Patrick Ireland. Can you comment on your main concerns as an artist?

BOD: I’ve nothing against money, except when I don’t have it. But artists make things and things enter the turbulent economic money scape. Then odd things happen. Money becomes more important than art. Art becomes fetishised. Art fairs and auctions become verifiers of value. The magical powers of art depreciate. We are in the midst of great decadence. I can claim no moral or ethical superiority. I made temporary installations the main spine of my work for over forty years because that’s the art I had to make. It kept me outside the market. I supported myself – and my art – with other jobs. It helps to have a good wife who sees you over the impecunious bumps. All the installations were made by Patrick Ireland, who now has been laid to rest at IMMA, courtesy of Enrique Juncosa. All temporary, except for one in Kalamazoo. Temporary artworks, I think, sharpen the viewer’s perception. What you see is under threat of withdrawal. The mortal artwork already includes quotients of regret, anticipatory flashes of memory, including the memory of – in my case – yourself in the artwork. So, occupying a temporary installation can be a complex affair.

BMMc: Would you agree that your writings can often provide indicators of your strategies as an artist?

BOD: I used to write about other artists, but not so much anymore. I learn something when I write about other artists. I write about my own work in letters to friends. I do a lot of my thinking that way. The White Cube book obviously refers, in several indirect ways, to my own concerns as an artist. It came out of my installations. I was clambering all over those white galleries, attaching lines to ceilings, corners, etc. until ultimately I asked myself, “what is this white box I’m in?” Or rather the white box asked me, “why are you all over my virgin spaces?” I was astonished at the immediate reception of White Cube in Artforum. It seems to go on forever. More translations coming up – France, Italy. People now assume I have wise things to say about the gallery. I don’t. I said what I had to say. I’m no gallery guru.

BMMc: Now that your most prominent (and notorious to some)artistic pseudonym Patrick Ireland has finally been laid to rest,can you reflect upon the 36 year experience of living and working as Patrick Ireland?

BOD: Patrick Ireland as you know is a political creation. Bloody Sunday in Derry influenced me profoundly, as it did everyone else. I signed my work by that name until the Brits left Northern Ireland and all citizens were given their civil rights. Liam Kelly in Belfast and I stay very much in touch. He keeps me well informed. The time had come to abandon Patrick. I believe that taking another name is a serious business, nothing larky or funny about it. There are certain subtle effects on your own person. Patrick Ireland eventually became to me a distinct and visible person with his own thoughts and ideas. A separation took place. It has to do with the power of naming, with the power of the word. Words are intrinsic to my work. I suppose you could call Patrick Ireland a word, a signature. I must avoid any hokey stuff here. But a strange reciprocal exchange did take place, an interfusion, a shudder through your substance. I became used to working as him. When I was him, everything else dropped away. I was alone with the work, or with good helpers – in Dublin I was most fortunate to have Brendan Earley and Fergus Byrne, who think deeply about their work. Meeting younger artists is very necessary for me. Joe Stanley, who helped with Patrick’s coffin and effigy; Brian Duggan, who is indirectly related, and Jeannette Doyle who lent her shoulder to Patrick’s coffin. Now I have to get used to making art as myself again. I will miss the freedom and concentration that Patrick gave me. But he is joyfully abandoned. Irishmen are not killing Irishmen and women up North. By the way, Liam Kelly’s book, Thinking Long is full of images of artists responding to that conflict. It has produced some great works of art – Shane Cullen’s Fragments sur les institutions Republicaines. And remember Bob Ballagh’s powerful gesture at the Living Art long ago, in 1972?

(1) After the events of Bloody Sunday in Derry in 1972, Brian O’Doherty began using the pseudonym / personae Patrick Ireland in relation to his art practice; and as part of this strategy the artist ceased showing work in Britain. After 36 years working as Patrick Ireland, O ’Doherty formally ‘buried’ his alter ego in a ceremony at the Irish Museum of Modern Art (20 May 2008) as a gesture of recognition to celebrate the restoration of peace in Northern Ireland.