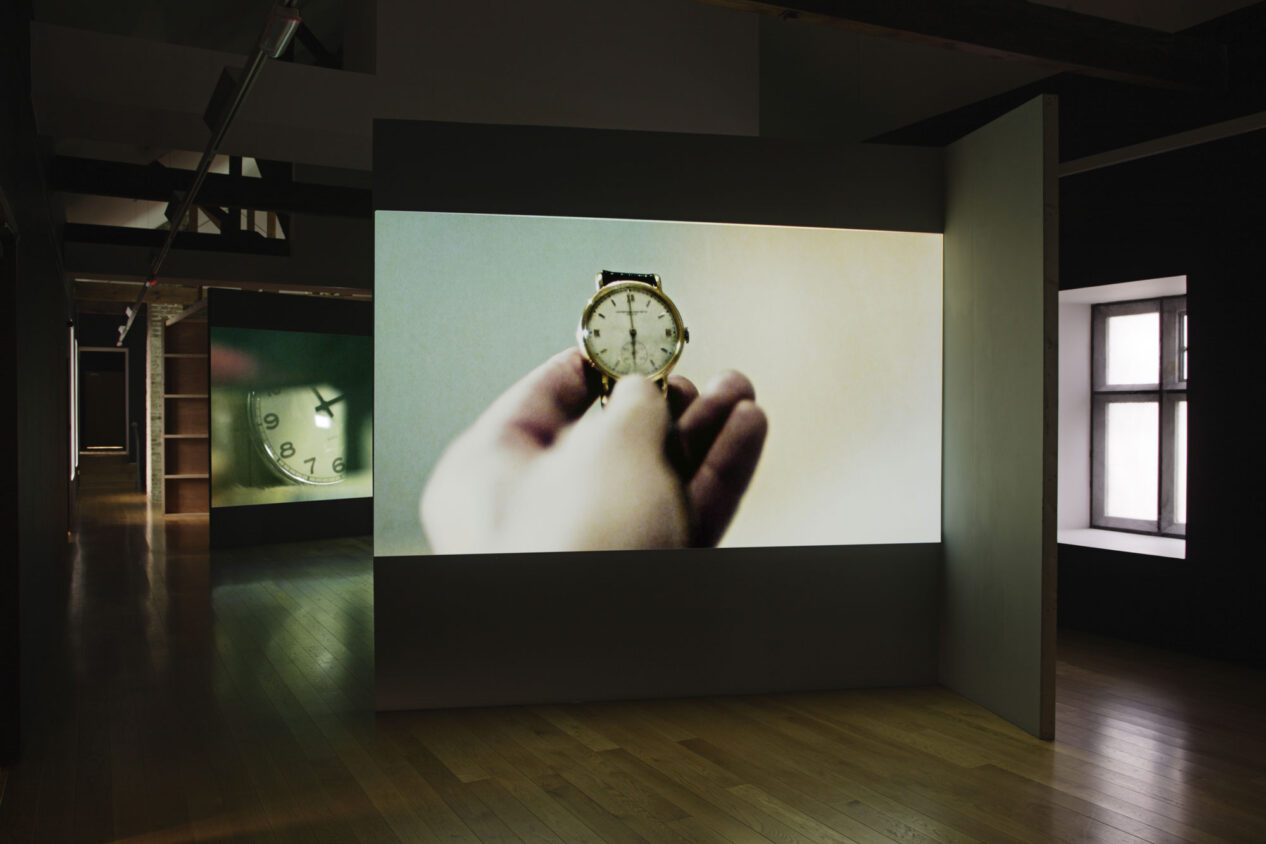 With a career spanning close to three decades, Gerard Byrne is known for his complex film installations that displace sequential narratives with non-linear playback systems. Byrne’s films often incorporate multiple viewing planes, where episodic reenactments extend across the gallery space, running parallel to one another, encouraging the audience to explore the space, while piecing together the fragmented narrative. A notable example is A thing is a hole is a thing it is not (2010), which charts separate episodes in the history of minimalism, including: a radio conversation between Bruce Glaser, Frank Stella, Donald Judd and Dan Flavin; Robert Morris’s 1960 sculpture, Column; and Tony Smith’s career-changing epiphany on the New Jersey Turnpike, which led him to minimalist art. Other works assume modular structures of indefinite duration. Taking cues from the serial qualities of minimalism, In Our Time (2017) takes place in a radio studio. Using the modular structure of commercial radio broadcasting as temporal framework, the film is played in sync with the opening hours of the gallery.

Byrne graduated from NCAD in 1991, just as ‘media art’ was about to experience a monumental shift from analogue to digital. As we discuss the evolution of Byrne’s working methods, he mentions a range of formats, including 16mm, VHS (and VHS-C), Hi8, Betacam SP, MiniDV, SD digital video, HD, 4k, and beyond. With this expansive collection of material, comes questions of storage and preservation. For Byrne, this has generally involved fastidious processes of digitisation and archiving, so even works created on analogue tapes (and kept safely in physical storage), also now exist on hard drives, making them more readily accessible. Giving a ballpark figure, Byrne estimates that he has over 100 hard drives of material. When I ask whether he has any advice for other artists on how they should digitally archive their work, he cautiously states: “Well, first thing I would say is, if you want to get advice on that, an artist is probably not the best person to ask. You’re better off asking somebody who manages data […] It’s not an art question. What I do for myself, is that I label all my hard drives in a very systematic way. They’re given a number, which goes up sequentially. The label also states the size of the drive and whether it’s an A or a B drive – the idea being that the B drives are backups of the A drives, so I usually try to have drives in pairs, if possible. And ideally, of course, you have a third backup. I also use a piece of cataloguing software called NeoFinder, which scans hard drives and makes an inventory of what’s on the drive. That catalogue is then accessible without the drive being connected. So if you’re looking for a specific file, you can search across all of the catalogues and find out which drives it’s on.”

Byrne has been working with non-linear digital video editing programmes since the mid-‘90s, when he was a postgraduate student at Parsons School of Design in New York. Then he was working with early versions of Adobe Premiere and Avid Media Composer; now he works with programmes like Final Cut. The project files for these programmes are equally important to archive, so that old video edits can be accessed for re-exporting and upgrading. However, Byrne concedes that, unfortunately, “software makers have no interest, or minimal commitments, to the idea of backwards accessibility”. This essentially means that unless you have a specific version of a piece of software (and the correct operating system on which the programme will run) you won’t be able to access that project anymore. Byrne gets around this situation by using hard drives to clone certain operating systems that will run specific pieces of older software, such as Final Cut 7. This clone drive can then be booted up from a computer, when he needs to access something. But this isn’t the end of the problem: “it’s also inevitably going to mean archiving physical computers, because it’s going to get to the point where certain operating systems are just not supported by newer computers. So, the only way you’ll be able to boot from them is by having an older computer… It’s farcical that you’re trying to save access to a file and that means you have to archive a whole computer.” Byrne has been dealing with archival problems like these for the past 10 years or so. With many of his major works in international collections, he’s been fortunate enough to discuss these issues with digital conservationists working in museums around the world. Digital conservation is becoming a professionalised field, with outside consultants advising both private collections and publicly-funded galleries on how to tackle the problems of storing and accessing digital formats. But Byrne admits: “In all the conversations that I’ve had in my travels, I’ve realised nobody really has definitive answers […] I don’t think anybody can do anything more than be reactive and try to make good choices.”

These conservation challenges aren’t just limited to the digital domain. As well as guarding against the obsoletion of computer software, installation hardware also needs to be ‘future-ready’. Byrne’s installations require meticulous levels of thought and design, incorporating both bespoke software and specialist hardware. Byrne’s collaborator, Sven Anderson – who works tirelessly as the primary technical designer for Byrne’s projects – has been a lynchpin in devising these systems. However, with the necessary complexity required to playback the works, a number of potential problems can arise. Firstly, the component parts of his installations, and the fact that they can modulate in structure, duration and layout, lead to challenges when finalising the works for collections. There is a process of “delimiting the work in a very material way” that needs to take place before it can be handed over to a museum. Secondly, hardware, files and other interconnecting parts pertaining to an artwork needs to remain accessible and functional in years to come. Re-showing works that are less than even a decade old, can become problematic, if hardware breaks down and needs to be replaced. And thanks to a rising culture of ‘planned obsolescence’, replacement might be the only viable option, when things are impossible to repair. File formats can also become unsupported if new hardware is introduced. Such dilemmas can spiral, unless all aspects are carefully thought through. Indeed, the creation of these works involves a stringent period of development and testing by Byrne and Anderson. The first major project they worked on together was A thing is a hole is a thing it is not (2010). They decided that the best way for the work to be delivered to collections was as a “ready-to-go, verified system”. As Byrne recalls, this was a huge amount of work, with Anderson writing a 50-page manual to accompany the artwork, outlining all aspects of the installation, from set-up and running, to troubleshooting.

For all the flexibility and increased convenience that digital technologies afford, they also introduce a set of challenges. “Migration between formats is actually a very natural quality of the digital environment we live in – that media can migrate between formats fluidly, and fluently – that’s kind of anathema to museums. At least in a historical sense, a lot of orthodox thinking around museums is an anxiety to change in relation to a work. To lock it down.” While custom-made presentation systems are currently only used by a minority of artists, they are becoming more common, as technology becomes more increasingly accessible. The role of museum collections in preserving these pieces of hardware is therefore likely to become a prescient issue, with Byrne concluding that: “As museum conservators’ knowledge of media and the technical side of media art advances, I think they’ll have more specific questions for artists.”

Gerard Byrne is an artist and lecturer based in Dublin. He is represented by Lisson Gallery, Galerie Nordenhake Stockholm and Kerlin Gallery.
gerardbyrne.com

Christopher Steenson is Production Editor of The Visual Artists’ News Sheet. He also works as a studio assistant for Gerard Byrne.
christophersteenson.com

Feature Image: Gerard Byrne, A thing is a hole is a thing it is not, 2010, installation view, Lismore Castle Arts; courtesy of the artist and Galerie Nordenhake.