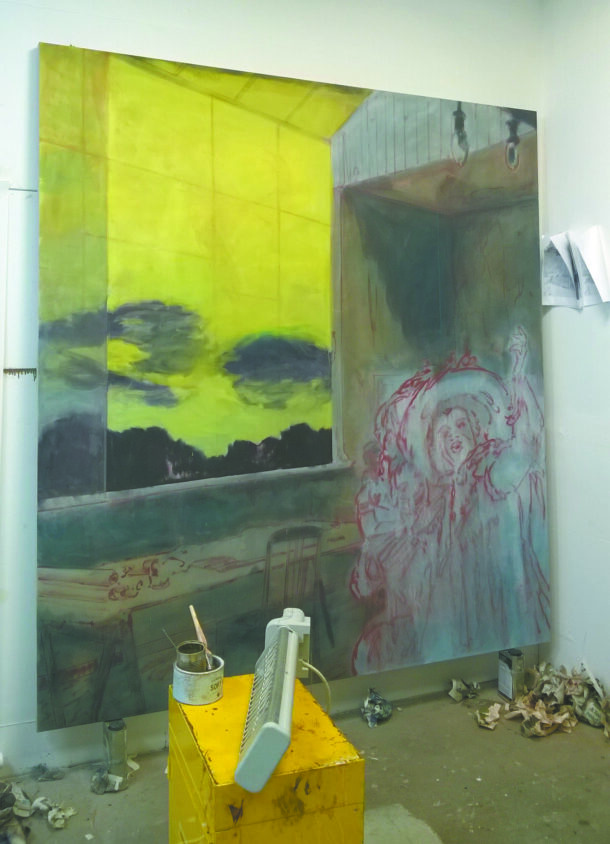 Dougal McKenzie: From my experience, so much of what has happened for painters in Belfast coalesces around the MFA. When I discovered that Alastair MacLennan – who was the MFA course leader in my time – had been a painting student at Dundee (although I was coming from Aberdeen), I was interested in how he thought about painting in relation to performance. I wonder how much the MFA affected, and continues to affect, how we see painting in the North, and whether it truly does have any more of an influence than the undergraduate painting course in Belfast?

As an undergraduate student in Scotland I only knew about the MFA in Belfast, outside of the London options, and it seemed like an exciting choice. I very quickly discovered that painters who had come out of the MFA in the late 1980s and early 1990s had remained in the city, in what was an active arts scene. The interesting painters for me at that time were (and still are) Paddy McCann, Ronnie Hughes, Michael Minnis and Áine Nic Giolla Coda, so they seemed like one good reason to stay. (Interestingly, these artists are all still teaching painting, at Belfast, Sligo, Galway and Limerick.) There were also other artists during the 1990s who had gone through the BA or MFA in Belfast, or had studied somewhere else and then returned, like Susan MacWilliam, Darren Murray, Cian Donnelly, Gary Shaw and of course Willie McKeown. There was always a ‘painting scene’ in Belfast, even if the art school seemed to be better known, and maybe still is, for artists who use performance and video. I have to say that, from an older generation, David Crone, who taught at the art school, was, and remains, the top painter in the North, maybe even in Ireland. During my early years in Belfast this vibrant art scene kept me very much connected to painting and its potential.

Susan Connolly: It’s funny really because, for me, having come through an undergraduate course in Limerick School of Art & Design (LSAD), at a time when it was very much an end of era for ‘medium-specificity’ discipline distinction at undergraduate level, the MFA in Belfast offered me the opportunity to explore, experiment and move away from painting. I had very much been doing it in Limerick, but I decided to return to painting once I arrived here in Belfast. I have often wondered why I did this and, now, with some distance, I think it had to do with stubbornly holding onto ‘painting’ and the challenges it offered.

My decision to come to Belfast was influenced by Áine Nic Giolla Coda and yourself, Dougal, when you taught in LSAD. I remember fondly all the visiting artists (most if not all from Belfast: Susan MacWilliam, Michael Minnis, Lorraine Burrell, Mark Pepper) that both you and Áine invited down to give artist talks. I know that this was very influential in helping my peers and I to understand that it was possible to be an artist outside of the college/academic environment – that there was a professional life beyond Limerick. When it came to applying for a Masters course there never really was any other option for me than Belfast.

In Belfast there are certainly serious painters dedicated to their work and managing to make it into the studio whenever possible, but that’s where any sense of professionalism ends for 99% of artists in any city. This is the reason why so many people may view artists as dilettantes, weekenders and part-timers. It’s a reductive attitude that I think may be accentuated by the Calvinist perspective that runs through ALL communities and across the political spectrum in Northern Ireland. Of course this is a bigger societal issue and we’re talking about painting in Belfast at the moment.

Living as an artist day-to-day in any city has its pros and cons. In Belfast it’s relatively inexpensive to rent a space (though not as cheap as you may think). A subsidised studio in the centre of town will be around £45–£110, so, for me, most of the pros for living in Belfast are monetary. We can afford to rent a house and studio and I can manage a good work/studio balance while still living in a city environment. I could never manage this in Dublin, having to commute to the studio from rural Kildare, which I did for a number of years.

Dougal McKenzie: Yes Susan, what you say about painting being a medium-specific discipline at LSAD – although I do remember quite a few painting students doing installation, photography and so on – was no bad thing. And it’s still quite like that in Belfast at BA level. This is good because it gives new graduates something to break away from, or push in other ways, on an MFA. That’s definitely something I did when I came to Belfast to begin with.

Also, you really have to stick to your own agenda in Belfast, to dig deep when it comes to keeping your profile up as a painter, because, even though we have a special artist-run scene, you don’t see a lot of painting exhibited in these spaces.

The MAC has done an awful lot to address this, with shows ranging from Peter Doig, Adrian Ghennie, Richard Gorman, Kevin Henderson, Paddy McCann and of course yourself Susan. It’s like you say Mark, it raises the question of what ‘professionalism’ means as a painter in the North. But it’s never really bothered me. The disadvantage of there not being a big painting gallery scene in Belfast is definitely outweighed by the advantage of what the city provides in the way of studio space. It’s good that we have a vibrant studio scene here: QSS at Bedford Street, Flax, Orchid, Array, Loft Collective, Pollen, Platform, to name just a few.

I think that artists in Belfast get as much out of being part of a studio community here as they do from going out on the gallery scene – the studio is where dialogue is happening, not at the ‘private view’. There has always been a sense in Belfast that it’s more about the pursuit and practice of painting, but that also raises questions about where you put that painting practice.

Mark McGreevy: I agree with you Dougal, when you were talking about there being no ‘official’ style of painting in Belfast. This is one of the most interesting things about the painting that is made here. It’s probably because there is little to no market influence, not that market influence is a bad thing, but you just don’t get different versions of an international style in Belfast.

For a time in Europe it was sludgy greys, greens and browns painted in a physically reductive manner, which you could see taking off in Ireland but not really in Belfast. Maybe the oddball eclectic nature of painting here is seen as a type of provincialism?

Dougal, you also mentioned David Crone. I definitely feel he should be held in much higher regard in both Ireland and Britain. His work easily holds its own with painting from the two Islands in the second half of the twentieth century, but yet there have only been a few large exhibitions of his work (I think Banbridge’s F.E McWilliam Gallery and Dublin’s Royal Hibernian Academy will be putting something on soon).

I do think that there is an upside to the commercial sector. There is something to look at, objects and things that people have made which aren’t as visually restricted by academic research, or as impenetrable as the art found in most museums or publicly-funded art spaces.

Susan Connolly: I suppose that leads me to discuss the ‘academic research’ aspect of painting (mostly because I am currently completing a PhD looking at aspects of expanded notions of painting).

I think, overall, it’s important that the painter’s voice is heard and documented. The discipline of painting, not just the act of making paintings, but also the written and the verbal, forms part of contemporary practice as a whole.

Painting, with all of its histories, needs to participate in the growing academic research models and platforms that have evolved over the last 15 years. If artists, especially painters, don’t engage in this process then unfortunately painting gets written about and contextualised only by those who have never or can never fully understand the material process of making, producing and adding knowledge to the visual language of our culture.

I believe that this is increasingly under threat from the homogenisation of our lives and the value we give the written word over the importance of a visual language. Importantly, in Belfast there are supports for artists like myself to pursue this type of research inquiry, through Ulster University’s well established and funded programme.

Dougal McKenzie: All of those possible strands to the painter’s contexts are interesting ones Susan – the academic, the theoretical, the gallery and so on. I personally have come to the realisation, however, that the main context I am interested in is, other painters, and what I make of their work, and what they make of my work. I think painters make work for other painters. That attitude may be viewed as reductive and far too insular, but I do feel this strongly.